In a gesture of peace, Pakistan has returned a captured Indian pilot to his home country. Tensions between India and Pakistan have escalated since a suicide car bombing carried out by Pakistan-based militants in Kashmir. 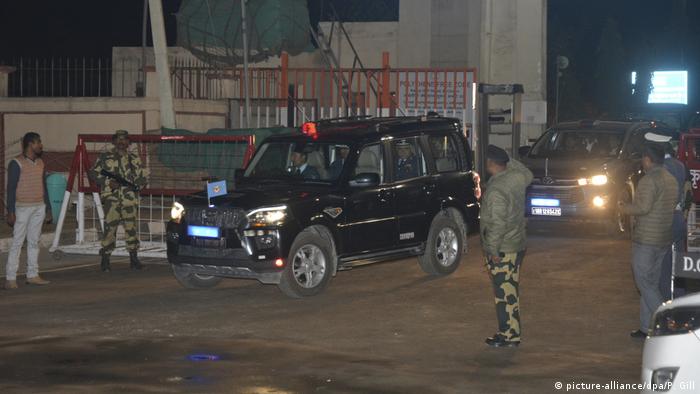 Pakistan on Friday released a captured Indian fighter pilot in a move many hope will ease tensions between the two countries.

Thousands of Indians, some waving flags and singing, had gathered at the Wagah border crossing near the eastern Pakistani city of Lahore before the pilot crossed into India shortly before 9 p.m. local time (1600 UTC).

Wing Commander Abhinandan Varthaman was captured on Wednesday. The Pakistani military said it shot down his and another Indian fighter plane after they crossed the Kashmir boundary known as the Line of Control and intruded into Pakistani airspace for a second time this week.

Pakistani Prime Minister Imran Khan had on Thursday called the decision to release the pilot a "peace gesture." But border security remained high with tens of thousands of Indian and Pakistani soldiers facing each other along the Line of Control as the handover took place.

The decision to release the pilot came after countries including the United States and China, as well as the European Union, urged India and Pakistan to de-escalate the conflict.

"We are happy that Pakistan has shown the maturity to take the step to announce the release of Wing Commander Abhinandan and his return to India," she said.

"We had objected very strongly to the vulgar display that Pakistan had done of an injured personnel of the Indian Air Force which is not in accordance with international humanitarian law and the Geneva conventions," she added.

Indian fighter jets entered Pakistani airspace on Tuesday and attacked an alleged terrorist training camp. It was the first Indian intrusion of Pakistani territory since 1971.

India claimed it killed a large number of militants from the Jaish-e-Mohammed group, which had claimed responsibility for a deadly suicide car bombing in India's Kashmir region on February 14 that killed at least 40 Indian troops.

Ambassador Tomar said India's strike was justified after Pakistan "refused" to capture those responsible for the car bombing.

"The only option left to us was to attack the camp," she said. "It was non-military. It was not an attack on Pakistan. We attacked no military installations. It was a counter-terrorism operation in a very remote part of Pakistan where there was no civilian population."

The Indian airstrike nevertheless received harsh criticism from Pakistan, which initially claimed it had deterred the Indian planes.

"Since 1999, definitely 2001, there was a whole cycle of violence and talks, but you always had a red line, and it was taboo to cross that red line because there was the question of escalating to the nuclear level," Singh said. "I think what has been done now is India's called Pakistan's nuclear bluff."

Singh said Khan's offer of peace talks was "not going to work" at this stage, because India's government takes the position that "talks and terror cannot continue at the same time."

Singh said that, for India, this meant the dismantling of the terror network in Pakistan. He said there was also a difference between a normal dialogue where prime ministers speak to each other and the comprehensive dialogue that the two countries started in the 1990s.

Following heightened tensions between the two countries, Pakistan's foreign minister on Friday said he would not attend a meeting of foreign ministers from the Organisation of Islamic Cooperation in Abu Dhabi this weekend, because his Indian counterpart had been invited to the event.

Mustafa-ibn-Jameel, 27, is from a remote district in India-administered Kashmir, but his work is connecting people across India.