The German fashion designer has criticized the "pastor's daughter" for opening Germany to "millions" of migrants. France's media regulator has launched a probe after he made the remarks on a popular French talk show. 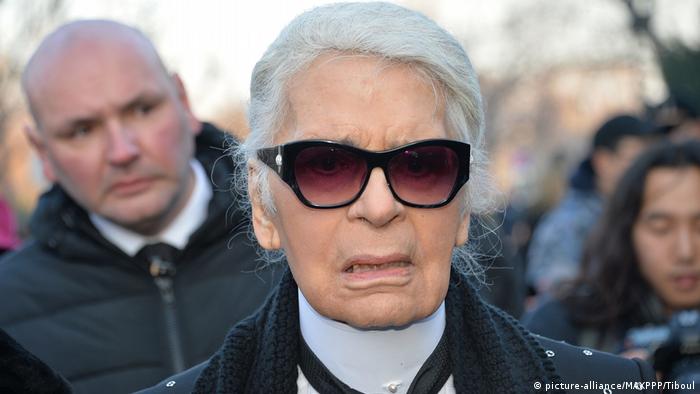 France's media regulator announced on Monday that several hundred people had launched complaints against German fashion designer Karl Lagerfeld after he appeared on a French talk show over the weekend.

Lagerfeld, who sits as head creative director for Chanel and Fendi, sparked outrage on Saturday when he evoked the Holocaust to criticize German Chancellor Angela Merkel and her open-door policy toward refugees fleeing conflict.

"One cannot — even if there are decades between them — kill millions of Jews so you can bring millions of their worst enemies in their place," Lagerfeld told a French television show on Saturday.

"I know someone in Germany who took in a young Syrian and after four days said, 'The greatest thing Germany invented was the Holocaust.'"

At the peak of Europe's migration crisis in 2015, Merkel pledged to offer refuge to Syrians fleeing a devastating civil war, a move that has since divided domestic and regional politics. That year, Germany received nearly 900,000 migrants.

"Merkel had already millions and millions [of immigrants] who are well integrated and who work and all is well … she had no need to take another million to improve her image as the wicked stepmother after the Greek crisis," Lagerfeld said.

"Suddenly we see the pastor's daughter," Lagerfeld added, referring to Merkel's father, who was a Protestant pastor in former East Germany (GDR).

While Lagerfeld has been widely criticized on social media networks for his controversial remarks, France's media regulator said it would continue to review the program and the fashion designer's remarks to determine if they merit further response from French authorities.

5 individuals who were once Karl Lagerfeld's muses

The German fashion designer Karl Lagerfeld has impeccable taste. Over the years, he has found inspiration in these five individuals - some more surprising than others. (18.11.2016)

Myanmar: Two dead as police crack down on anti-coup protests 5m ago