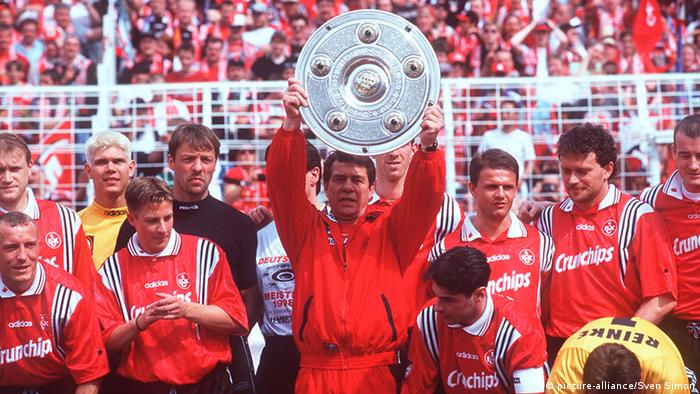 If Otto Rehhagel hoped to carry some of the momentum from his team's march to the 1996-97 Bundesliga 2 title in to a daunting season in Germany's top flight, he was dealt an early blow when the fixture list came out. First up: champions Bayern Munich. Away.

The formidable Bavarians, coached by Giovanni Trapattoni, had added the German Cup and now-defunct German League Cup to their Bundesliga crown and boasted Lothar Matthhäus, Giovane Elber, Oliver Kahn, Bixente Lizarazu and Mario Basler among their playing squad. Kaiserslautern coach Rehhagel knew most of them well, his dismissal by Bayern four days before the first leg of the 1996 UEFA Cup final led him to his job with Die Roten Teufel (The Red Devils).

His revenge was first swift — as an 80th-minute goal from Michael Schjonberg secured the newly-promoted side a shock win on the opening day — then deep, with Kaiserslautern briefly breaking Bayern and Borussia Dortmund's decade-long duopoly with a title win forged on that first day.

While Bayern had the stars, Kaiserslautern were a tightly-bound team who'd become accustomed to winning. "It might sound stupid, but all the games we won in the second tier helped instill a winning spirit," Danish defender Schjonberg later explained.

Rich in heritage and team spirit

The side from a town with a population of less than 100,000 in the south-west of Germany drew an average gate of 36,709 to the Fritz Walter stadium in their victorious 2.Bundesliga campaign, with the name of their ground a nod to their rich history —Walter was captain of the West Germany side that pulled off one of the biggest shocks in World Cup history in 1954. 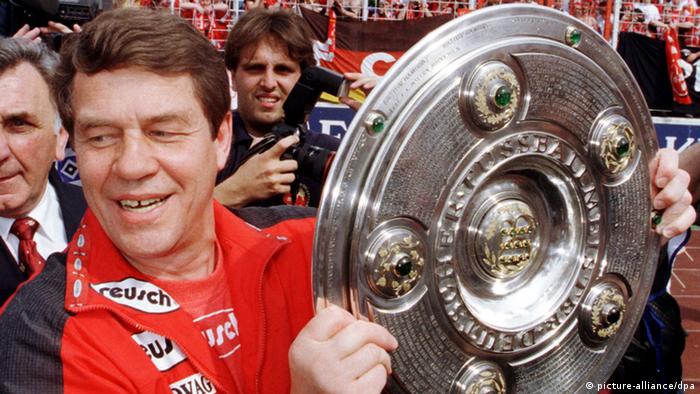 Otto Rehhagel lifts the Meisterschale in 1998

The winning spirit that Schjonberg identified proved difficult to break and after hitting the top of the table after four games, Rehhagel's men couldn't be stopped.

The German coach's international reputation largely comes from his time in charge of Greece, when he led the 150-1 outsiders to Euro 2004 glory with a defensive, aerially-dominant side who relied heavily on set pieces. But that wasn't the case with Kaiserslautern.

While their 21-goal attacking fulcrum Olaf Marschall was a typical burly target man, Rehhagel's side also found room for the talents of Ciriaco Sforza. The Swiss playmaker had excelled in an early spell at Kaiserslautern before being cast aside by Bayern and Inter Milan but became one of the league's most important players on his return to Kaiserslautern.

"Otto gave us our freedom on the pitch," Marschall told UEFA's website in 2015. "He told us the lineup; we did the rest. Everyone helped out in defense, even the strikers, chasing the ball as soon as we'd lost it. A bit like Dortmund when they won their recent Bundesliga titles. Otto had this incredible sense for how to build a team."

As well as Sforza, Rehhagel relied on Brazilian winger Ratinho for creativity and complemented that pair with solid midfield workers as well as occasional outings for new signing Michael Ballack, who'd joined from Chemnitz at the start of the season.

As with Greece, set pieces were important, with Sforza's delivery and Marschall's heading critical but it was the use of Czech international Mirsolav Kadlec as a sweeper that gave a relentlessly active side a crucial tactical advantage. The spare man at the back was comfortable enough in possession to move in to midfield and add numbers there when advantageous. 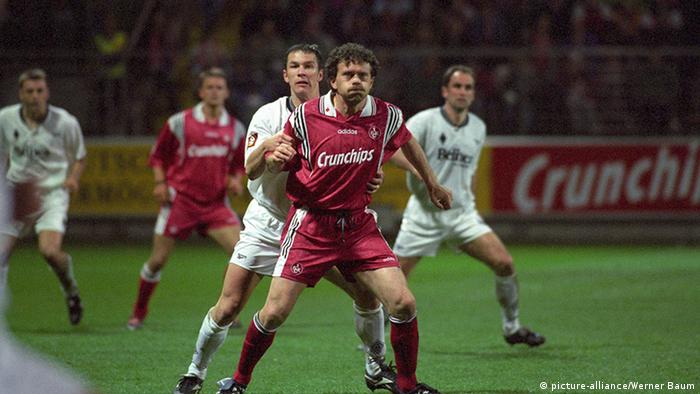 Unlike Greece, this was not a limited side. Rehhagel defined himself as a "democratic dictator" whose catchphrase was "the decisions I make are always correct" but a relatively ragtag group of players, including an aging Andreas Brehme, who scored the winner in the 1990 World Cup final, bought in to his methods wholesale.

Doing the double over Bayern

"When I was on holiday the telephone rang non-stop," Sforza said of his former boss. "When Otto wants something he will not leave you alone."

Whatever his methods, Rehhagel's team were a force of nature. After their opening day defeat, rivals Bayern went on a 15-match unbeaten run, keeping the pressure on the Red Devils until they met an Ulf Kirsten-inspired Bayer Leverkusen in late November and lost 4-2.

A week later, a Didi Hamann own goal and a strike from Bulgarian midfielder Marian Hristov helped Kaiserslautern do the double over the Bavarians in front of a full house up on the Betzenberg hill and take a seven-point lead at the top of the table. 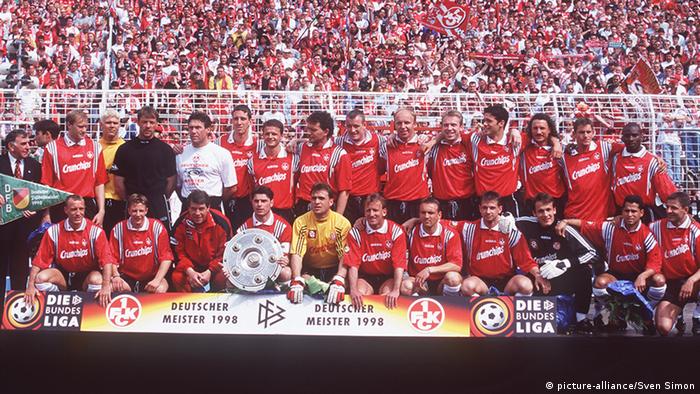 Still, the footballing public was skeptical. Now the pressure of expectation would surely tell? Not a bit of it. In fact it was Bayern who cracked first, losing three on the bounce in February and March, allowing Kaiserslautern to seal the title with a game to spare with a jubilant 4-0 home win over Wolfsburg. It was followed by a party that lasted the distance as well as the team had done.

But, despite a fifth-place finish in the following campaign and a run to the Champions League quarter-finals in 1998-99, where they were spanked by Bayern Munich 6-0 on aggregate), the hangover eventually kicked in.

Brehme and Kadlec had left after the title win, Sforza then fell out with Rehhagel and Ballack was controversially sold to Bayer Leverkusen at the end of a season where Bayern regained the title.

Though they made it to the UEFA Cup semifinals in 2001, the Red Devils could never return to such heights. They experienced near-fatal financial problems in the early part of that decade and bounced between the top two divisions before falling in to the third tier in 2018.

With the current season on hold, they sit precariously in 14th and could potentially fall still further. But they'll always have 1998.

Germany’s first title win since since reunification helped bridge a divide beyond the borders of a grass pitch. A semi-final win against host England was the hallmark of their message of unity. (24.03.2020)

While Germany's 7-1 semifinal win against Brazil didn’t win them the 2014 World Cup, it was the moment they announced their return to the top of the football world. DW looks back at an historic night. (23.03.2020)