Germany’s first title win since since reunification helped bridge a divide beyond the borders of a grass pitch. A semi-final win against host England was the hallmark of their message of unity. 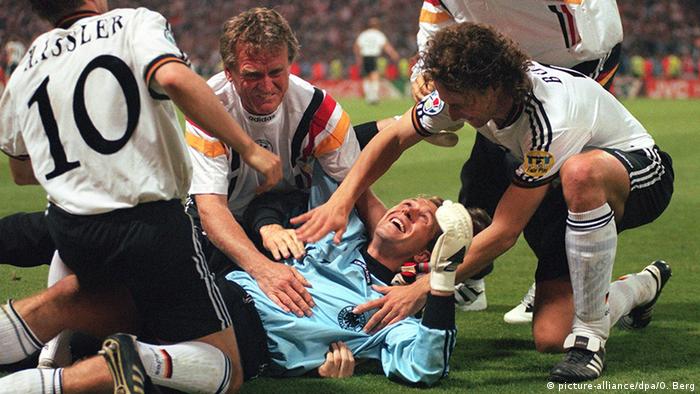 "Achtung! Surrender - For you Fritz, ze Euro 96 Championship is over!" screamed the front page of the Daily Mirror, a British tabloid. It was a lazy attempt to drum up fervor among English fans at a time when the animosity levels towards the Germany were low.

Nevertheless, surrender wasn't on the cards in one of the fiercest and most memorable semifinals seen at the European Championships. Football had come home that summer and Germany were taking on tournament hosts England, who were out to avenge a heartbreak from six years prior, riding on a wave of passion and patriotism.

As a side which had contributed greatly to "30 years of hurt," as the song goes, Germany were trying to heal wounds of their own and were eyeing a first title win since the fall of the Berlin Wall in 1989.

Captain at the time, Jürgen Klinsmann has since said the integration of the likes of Euro 96 Player of the Tournament Matthias Sammer, "helped a lot in this cultural change, because they were idols for the East Germans." That summer football "accelerated the process" of bridging the divide. 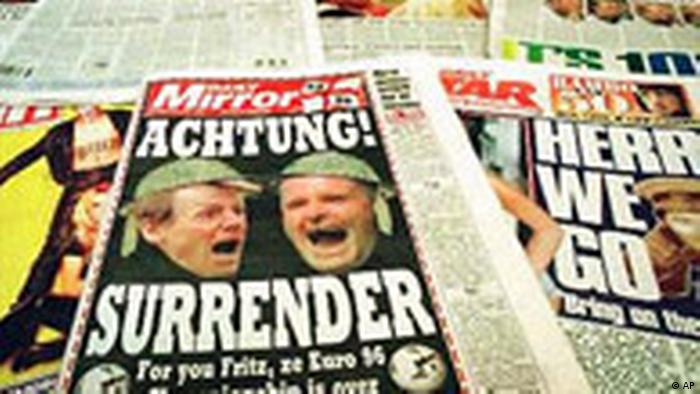 The British tabloids were typically fervent

The only blemish on their Euro 96 record was a goalless group game with Italy — 90 minutes goalkeeper Andy Köpke will look back on fondly, striker Sammer less so. An ill-tempered quarter-final win over Croatia came at the cost of losing top scorer Klinsmann to injury and, not to help matters, Germany got off on the wrong foot at Wembley.

Inside three minutes, tournament top scorer Alan Shearer converted a trademark header as the hosts' euphoria cocktailed with a full-blooded approach to the opening exchanges. Some of the challenges going in were not for the faint-hearted.

German coach Berti Vogt's charges shrugged off the set back and stemmed the flood of emotions by leveling the score less than 15 minutes later when Klinsmann's replacement Stefan Kuntz ghosted past Stuart Pearce to equalize.

"It was the greatest achievement of all, in my head and at that time, to play at the old Wembley," Kuntz told reporters in 2017. "It was one of the last games there and to play against England, in England, with the history of 1966 and everything, it was a very special game."

"The team is the star" was Vogt's mantra, and resilience was a defining characteristic. Klinsmann has since admitted that "Italy were a bit better and England had a great team," but he believes Germany proved that "even if we were not the best team, we had the greatest will." 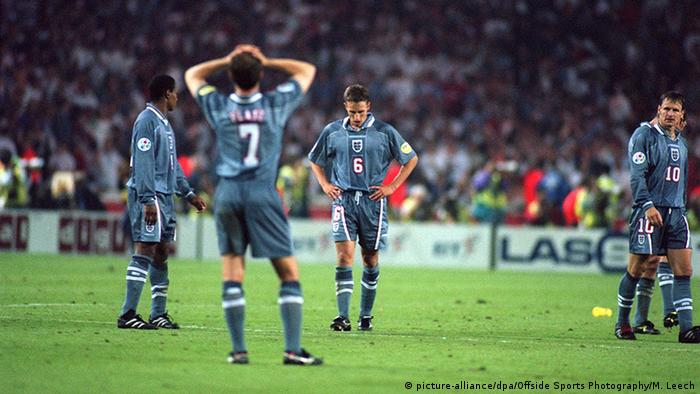 Gareth Southgate (second from right) sulks after missing a penalty

Germany's "will" came to the fore as they survived a greater share of the scares in a dogged affair. Locked at 1-1 just like at Italia '90, the threat of the Golden Goal rule truly released the shackles of both sides in a pulsating encounter that had everything — except a knockout blow.

Darren Anderton hit the post for England, Andy Möller stung the palms of David Seaman before Kuntz rose highest from a corner to score what would have been the winner, only to have it chalked off for a foul that was commonplace in penalty boxes in the 90s.

Möller, knowing he'd miss the final after being booked, made his final act of the tournament one to crush the hosts as he converted following Gareth Southgate's miss. 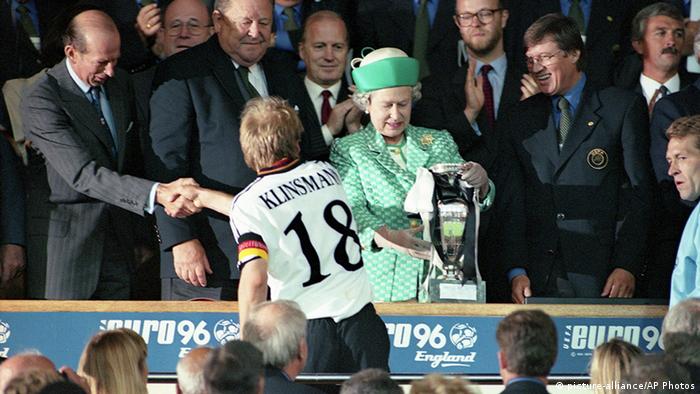 Just like in 1990, the win over England fuelled the fire that fashioned another successful title tilt — the first for the newly unified Germany. Vogt's squad became idols when they beat the Czech Republic with a Oliver Bierhoff's Golden Goal four days later, but it was the semifinal triumph over England which really sent the biggest message, far beyond the pitch.