Julian Assange is fighting to stay at Ecuador's embassy in London, but his hosts don't want him anymore. The WikiLeaks founder accused the embassy of carrying out a surveillance operation on behalf of the FBI. 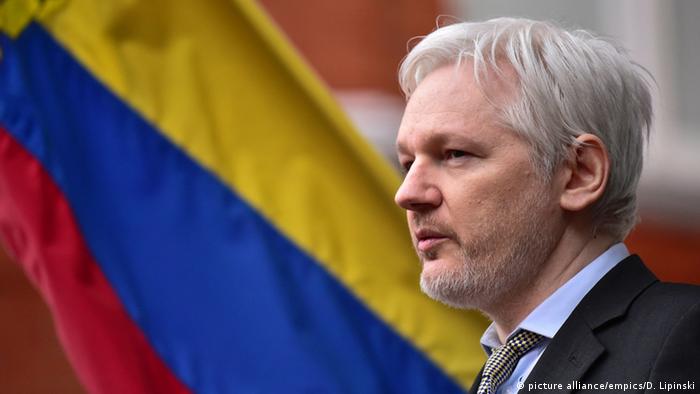 WikiLeaks founder and transparency activist Julian Assange is locked in a legal battle with Ecuador over the new stringent conditions imposed in October on his embassy stay. This week, he has threatened to take his case to the International Court of Justice if a second appeal against the Ecuadorian government fails.

The new rules by the Ecuadorian Embassy have resulted in the tightening of privileges he is allowed and put financial demands on his remaining in the building. It also introduced the option for Quito to expel the Australian if he breaks the new rules.

Assange sought to challenge the new house rules in court in November, saying they violated his fundamental rights, but judges ruled against him. He has appealed the decision and should receive a verdict on in eight days.

For the past year, the Ecuadorian government has been seeking to rid itself of what it sees as an international problem it inherited from the previous administration. The WikiLeaks founder has been at the embassy since 2012, when he was granted asylum by the administration of President Rafael Correa.

The stricter rules and reduction in privileges suggest the Ecuadorean government is hoping Assange will choose to leave, but the efforts have been unsuccessful.

Ecuadorian daily newspaper El Comercio reported last week that Quito was ready to improve its diplomatic relations with the UK, citing comments from Ambassador Jaime Marchan. "In the recent years, due to the situation we have at the embassy, there has been an obligatory cooling and distancing in the relationship," Marchan said.

In terms of Assange's embassy home, Marchan did not mince his words. "The embassy is not an asylum camp, but a diplomatic mission that has a daily function to fulfill," the ambassador said.

Marchan said that since efforts to grant him citizenship or diplomatic status have failed, he felt that now "Assange should be the one to make the decision" to leave.

Read more: Whistleblowers should be ‘protected not prosecuted’

As a result of Ecuador's change of heart, the relationship between Assange and his hosts has soured, but the WikiLeaks founder is still reluctant to leave.

Venezuela-based Latin American broadcaster Telesur reported on Wednesday that Assange had claimed to be under surveillance within the embassy, an accusation he made to reporters in a video conference. Assange accused the FBI of running an operation to pressure Quito to end his political asylum deal and extradite him to the United States.

Assange claimed that his surveillance information was being sent directly to the FBI. He also criticized Ecuadorian authorities, saying that officials at the embassy had made "pejorative and threatening comments" about him and that his work as a journalist had been questioned.

The Australian spoke out against his housing restrictions, noting that he lives in a type of "solitary confinement," which is now threatening his health.

Assange's fears that the US is out to get him are not completely unfounded. Last month, US officials accidentally revealed the existence of an indictment against him, though the charges remain unknown.

The extent to which the US has pressured Ecuador to expel him from the embassy remains unclear, though WikiLeaks maintains that Washington is actively involved.

"Ecuador recently secured $1.1 billion (€970 million ) in loans. The US representative to the IMF told Ecuador in late 2017 that loans were conditional on Ecuador resolving the Assange and Chevron matters," WikiLeaks said in a statement.

If Assange left the embassy, the matter of his extradition would be decided by courts in the UK. Ecuador has said the UK provided written guarantees to President Lenin Moreno that the Australian would not be extradited to a country where he would face the death penalty.

This does not mean, however, that Assange wouldn't be apprehended by UK authorities for violating conditions of his bail agreement when he fled to the Ecuadorian Embassy in London.

On Wednesday, Ecuador's top attorney, Inigo Salvador, said the written guarantees were all that Quito had to give. Salvador admitted that his country "cannot provide assurances to Mr. Assange that the UK will not hand him over to a third country that requests his extradition."

The UK signaled in October that it would not extradite the Australian if he left the embassy, as no extradition request currently exists, and that he would only serve six months in jail for his outstanding jail violation.

Although an individual facing the death penalty in the US cannot be extradited, the law would allow for the US to extradite  Assange if it guarantees the British government that — if convicted — he would not be executed.