The Democratic presidential front-runner will stream briefings due to the president's handling of the COVID-19 pandemic. The move follows multiple misleading statements by Trump, who until recently downplayed the threat. 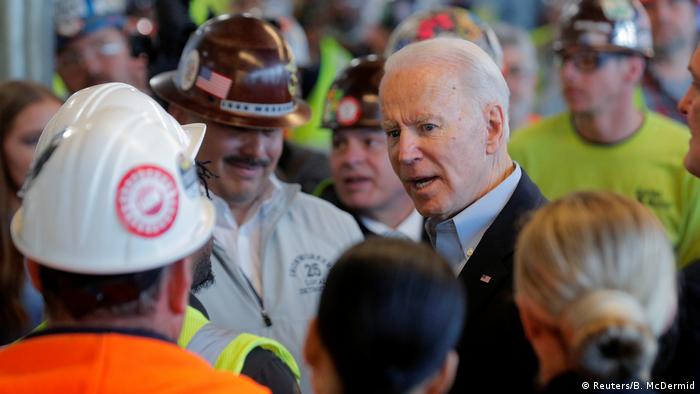 Despite self-isolating at his home in Delaware, US presidential hopeful and former Vice President Joe Biden will on Monday begin giving "shadow" briefings on the coronavirus pandemic.

The news site Politico reports that the leading Democratic Party candidate for the White House has installed live streaming technology at his house to allow him to give regular updates on the health emergency.

Biden currently leads Senator Bernie Sanders in the Democratic race to take on Trump in November's US presidential election. The former vice president says the shadow briefings are necessary to help inform and protect the American people due to the president's repeated false statements and downplaying of the health threat during Trump's own news conferences — in which he has stood with a crowd of people and failed to model social distancing.

For weeks, Trump played down the need for social distancing measures and increased testing to combat the virus' spread. Experts have said that the president has repeatedly made several false statements in his White House appearances, including that a malaria drug will soon be used as a coronavirus vaccine. Health experts say the drug is not that effective against COVID-19 and a shortage of it exists in the US.

Trump has also insisted that any individual can get tested for the virus, despite the fact that a nationwide shortage of testing kits persists.

On Saturday, Biden on Twitter accused the president of being "behind the curve through this whole response," and called for more "urgency and ambition" in resolving the health crisis.

"Now he's switched to falsely telling us that he's taking action that he has not taken, and promising results that he's not delivering," Biden added. "People are scared. They're frightened. And their president is just exacerbating their concerns."

Biden had previously echoed widespread criticism that Trump's handling of the pandemic had deliberately misled the public, stating that Trump was "unfit to lead us through this crisis." The former vice president cited a New York Times report that the president had been briefed for months about the severity of the impending crisis but did nothing to prepare for it.

The president's supporters have, meanwhile, accused Biden of purely using the emergency for his own political ends. Trump campaign manager Brad Parscale did not reply about Trump's misleading statements or poor preparation, and instead accused Biden of taking "attention from real updates Americans should know just to score political points."

After watching the pandemic unfold in China and Europe, the US has seen a huge rise in the number of confirmed cases. On Saturday, Johns Hopkins University said 26,747 people had tested positive for the virus in the US, and 340 people had died.

Several US states, including New York, California and Illinois have put severe restrictions on public movement. A ban on non-essential travel to the Canadian and Mexican borders took effect on Saturday, following a ban on incoming non-US citizen arrivals from Europe.

Read more: What you need to know about US travel restrictions on EU citizens

The social distancing measures have prompted Trump, Biden and Sanders to put more effort into their digital campaigns. US media reports that after rallies and door-to-door canvassing was put on hold, video "townhall" events, online fundraisers and social media messaging have been stepped up.

Meanwhile, US senators are continuing negotiations on a massive stimulus package to rescue an already-stalling economy, which expected to amount to between $1 trillion (€930 billion) and $2 trillion.

Coronavirus digest: US braces for Thanksgiving surge 43m ago