Joe Biden has been inaugurated as the 46th president of the United States. Donald Trump did not attend the event, and in doing so became the first outgoing president to avoid the occasion in 150 years. 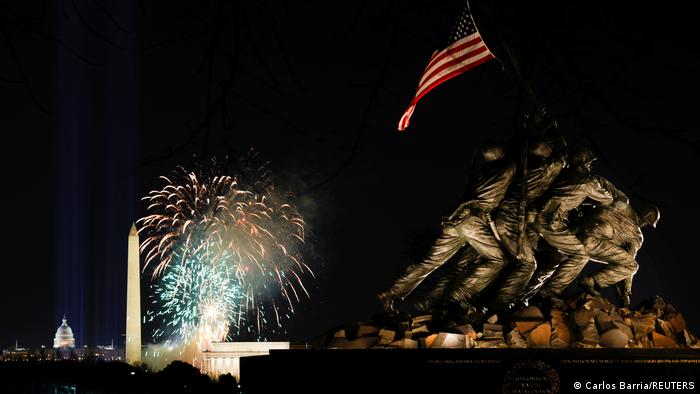 Joe Biden was sworn in as the 46th president of the United States on Wednesday after more than five decades in politics, and over 30 years since his first effort to become president.

In his speech, the 78-year-old heralded a new dawn.

"My fellow Americans, this is America's day. This is democracy's day. A day of history and hope, of renewal and resolve," he said as former presidents Barack Obama, George W. Bush and Bill Clinton watched on.

There was one notable absentee from proceedings — Donald Trump was not present to witness the event in an extraordinary break with tradition. He is the first president to skip his successor's inauguration since Andrew Johnson in 1869.

Biden was quick to reference the violent events of two weeks ago at the Capitol when angry Trump supporters stormed the meeting place of the United States Congress, resulting in the deaths of five people.

"On this hallowed ground," Biden continued, "where just a few days ago violence sought to shake the Capitol's very foundation, we come together as one nation, under God, indivisible, to carry out the peaceful transfer of power as we have for centuries."

Memorable moments from the inauguration of 46th US President Joe Biden

Harris: 'We shoot for the moon'

Just minutes before Biden took center stage, Vice President Kamala Harris took the oath of office to become the first woman to hold the post. She is also the first Black person and first person of South Asian descent to be vice president.

As part of the celebrations later in the evening at an event called "Celebrating America," Harris said it was an "honor to stand on the shoulders of those who came before, to speak tonight, as your vice president."

Harris was speaking in front of the reflecting pool, where on Tuesday she and Biden stood to remember the 400,000 people who have died from the coronavirus in the United States.

"In many ways, this moment embodies our character as a nation," she said. "It demonstrates who we are, even in dark times.

"We not only dream, we do. We not only see what has been, we see what can be. We shoot for the moon, and then we plant our flag on it. We are bold, fearless and ambitious. We are undaunted in our belief that we shall overcome, that we will rise up. This is American aspiration."

Earlier, it was 22-year-old poet Amanda Gorman who captured the mixed emotions of the past four years with a poem in which she referred to herself as a "skinny Black girl, descended from slaves and raised by a single mother (who) can dream of becoming president only to find herself reciting for one."

The president was quick to get to work as he signed an executive order to rejoin the Paris climate agreement as part of a series of Day One actions to reverse course on immigration, climate change, racial equity and the handling of the coronavirus. Biden is also set to reverse Donald Trump's decision to leave the World Health Organization.

World leaders were quick to congratulate the new president, though there were slightly more cautionary welcomes from Iran and Russia.

The day-long event ended with fireworks lighting the Washington sky, and Joe Biden, along with his family, waving from the balcony of the White House to herald a new beginning, both at home and abroad.

'It's gonna be pretty good'

'He's gonna bring everybody together'

The new US president is the right person to address the issues faced by a profoundly divided nation, DW's Ines Pohl writes. But are the challenges too big?

President Joe Biden has sought to reverse his predecessor's signature immigration policies. It starts with lifting a travel ban on people from many mostly Muslim countries.

BioNTech founders receive one of Germany's highest honors 47m ago

Nigeria: Hundreds of schoolgirls feared abducted in raid 4h ago