On Wednesday, Joe Biden became the new US president. His inauguration didn't have large crowds, but many still took to the streets to show their support for Biden — or to voice their anger. 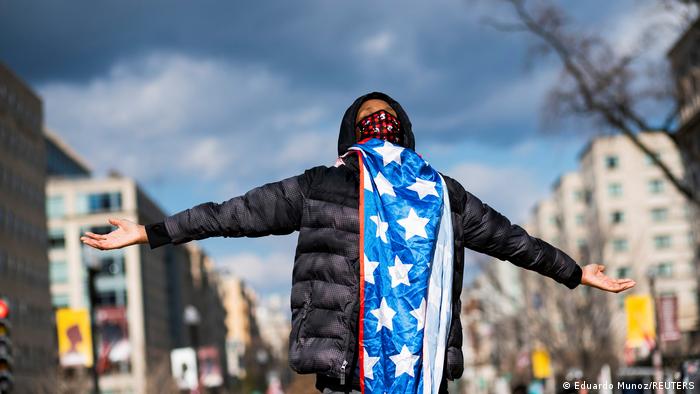 A screenwriter couldn't have come up with a more telling contrast between former President Donald Trump and President Joe Biden.

Biden started his Inauguration Day by attending a church service with not only his family, Vice President Kamala Harris and Democratic congressional leaders like Nancy Pelosi by his side, but also just a couple of rows in front of Mitch McConnell, the former Republican Senate minority leader. It's a fitting start for the presidency of a man who has stressed since his win in November how much he values bipartisan cooperation.

Trump broke protocol by leaving Washington on Wednesday morning to fly to Florida instead of witnessing his successor being sworn in as president. The last time an outgoing president skipped the inauguration was 1869, when Andrew Johnson refused to attend Ulysses S. Grant's big day. Johnson was the first president to be impeached in 1868.

On Wednesday, Trump took the Marine One helicopter to Joint Base Andrews and then left Washington on Air Force One for the last time. As the plane took off, speakers at the air base blasted Frank Sinatra's "My Way."

Inauguration without the crowds

The inauguration itself was a very different affair from those that came before. Speakers and guests on the Capitol terrace looked out over the National Mall that was filled with flags and National Guard troops instead of celebrating crowds. Because of security concerns after the attack on the Capitol on January 6, and to prevent the spread of COVID-19, downtown Washington had been almost entirely closed off the public.

One place where people could still gather was Black Lives Matter Plaza in front of the White House, where a small number of BLM protesters had come together for the inauguration.

The small crowd cheered as Biden was sworn in as president ahead of schedule a couple of minutes before noon, reported Ines Pohl, the head of DW's studio in Washington.

A few onlookers had made their way as close to the Capitol as they could get. Drew Ryan, who had traveled to Washington from New Jersey for Inauguration Day, told DW that Wednesday marked "a small steps in politics, but a large step for our country."

An emergency room nurse who did not share her name told DW that she welcomed the change in the White House after "the amount of harm that [Trump] has done to this country, our international relations and what he's done to harm our most vulnerable people."

"I don't know how we're going to come back from this, but I know that Biden is the person to do it," said the woman, wearing a Biden-Harris beanie. "He's going to bring the country together."

'We will get through this together'

Bringing the country together was also the main theme of President Biden's inauguration speech. He stressed that he was the president of all Americans, including the more than 74 million who had voted for Trump. Biden said it was his priority to tackle the deep division among the American people.

"With unity, we can do great things," Biden said." We can see each other not as adversaries, but as neighbors."

Biden also emphasized the importance of a unified response in the battle against the coronavirus, which to date has killed roughly 400,000 people in the US.

"We must set aside politics and finally face this pandemic as one nation," he said. "We will get through this together."

Supporters of former President Trump were not moved by the speech. Randall Terry, who had traveled to DC from Memphis, Tennessee, told DW that he had one main thought about the start of Biden's presidency: "It's a disaster."

Terry said that Trump's personality was "rough," but that his policies were good: "Protecting the unborn from abortion, protecting our Second Amendment right to own firearms, protecting our southern border from illegal immigration, helping us to be energy-independent. Bringing jobs back to America, having lower taxes, less regulation."

"Biden is going to undo as much of that as he can," Terry said. "And the average American is going to feel the hit, the pain." 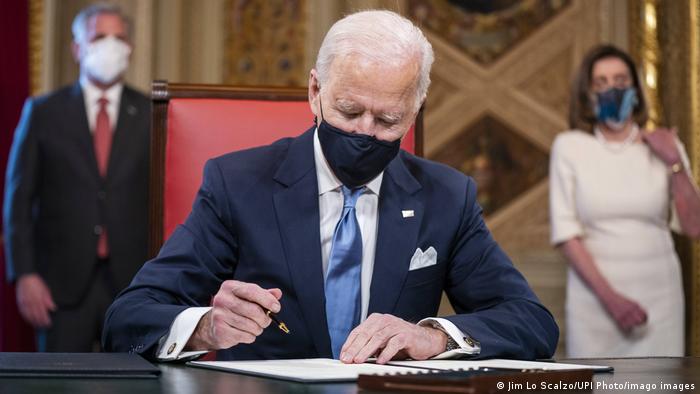 Biden got straight to work after his inauguration signing Cabinet nominations

Importance of unity 'is an important message'

The switch in tone between President Trump and President Biden is undeniable.

"Biden said he is the president for all Americans — that's not talk we heard in the last four years," J. Miles Coleman, a political analyst with the University of Virginia Center for Politics, told DW.

Coleman also said that Biden mentioning the importance of unity in his inauguration speech can only be the first step in a long journey.

"Just because Biden said we need to unify does not mean he has a magic wand" to make that happen, Coleman said. "But it is an important message, one that Trump never struck."

US author Jeffrey Eugenides: Biden is 'the person' to heal the United States

Emily Gordine and Grzegorz Szymanowski in Washington, DC, contributed to this report.

The inauguration of Joe Biden in pictures

Joe Biden was sworn in as the 46th president of the United States, and Kamala Harris has become the first female, first Black and first Asian American vice president. Here's a review of the historic moment in pictures.

Donald Trump is not attending Joe Biden's inauguration. While highly unusual, it's not the first time an outgoing president is not taking part in the ceremony.