Japan′s ′yami kawaii′ culture breaks down mental health barriers | Asia | An in-depth look at news from across the continent | DW | 09.10.2020

Eye patches and fake blood, bandaged limbs and images of slashed wrists — a fashion trend is helping young people in Japan to communicate feelings that they would otherwise be unable to voice. Julian Ryall reports. 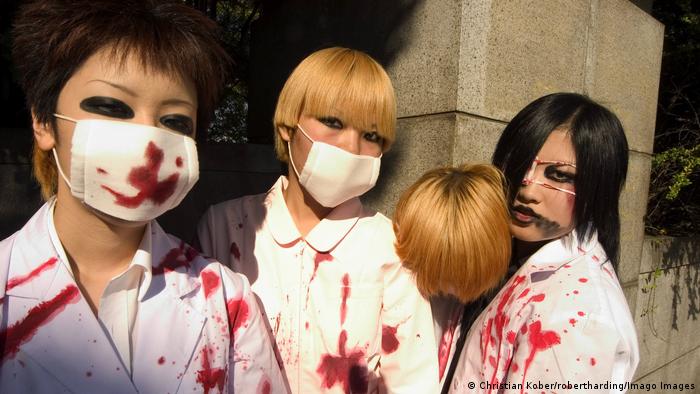 To the outside observer, the "yami kawaii" subculture of Japanese fashion can be unsettling and disturbing. It brings together the cute pinks and pastels of more mainstream "kawaii culture," but then melds that with some altogether more disquieting images — black T-shirts with depictions of cleavers, knives or the message "I want to die," and necklaces with fake syringes filled with blood.

To a follower of this subgenre of fashion, however, that is all on the surface. The meaning goes deeper than the outward image and actually serves to reassure others who dress similarly that they understand what they are going through, that they sympathize with their depression and that they may also be having suicidal thoughts.

"Yami kawaii" — "yami" means both sick and dark — first emerged as a cultural phenomenon in 2015, but it's attracting renewed attention as the suicide rate among young Japanese women climbs after years of decline.

According to the National Police Agency, there were 1,854 suicides across the country in August, up 16% from the same month one year ago. The number of female suicides, however, was up more than 40%.

As the world marks the Mental Health Day on October 10, experts say rising rates of mental health problems and suicide in Japan can be directly attributed to the ongoing coronavirus pandemic and disruptions to people's lives. Many Japanese are concerned about losing their jobs or having their income reduced. Others are reporting stress at not being able to see friends or family members, or not having a holiday this summer. And, eight months after the first cases were reported in Japan, many people are becoming increasingly pessimistic about their immediate futures.

But because mental health and suicide are still largely considered taboo subjects in Japanese culture, "yami kawaii" fashion is the perfect way for people struggling with those sentiments to express themselves.

"For the people who are into 'yami kawaii' fashion, it is a way of making light of their depression and how they feel inside," said Misha Janette, a Tokyo-based fashion critic and blogger. "It's almost cosplay, the way that they dress and look, to make fun of their mental illnesses. And because they are in that community, they can make that statement to other people in the same situation," she told DW.

Kyle Cleveland, a professor of Japanese culture at the Tokyo campus of Temple University, points out that youth culture is "constantly evolving because the people involved exhaust the idiom and become bored with that form, so they seek new ways to offend people."

Young followers of fashion are using "yami kawaii" to "say something meaningful about their society, whether that is mental health issues or people who are socially isolated," Cleveland told DW.

"It's performative to identify or make a point about an issue, although in this case it is not politically coherent and is only likely to attract limited attention."

"Yami kawaii" can be traced back to a manga series by author Ezaki Bisuko featuring a girl named Menhera-chan. Bisuko's parents divorced when he was a child — a trauma that, combined with bullying, caused him to develop a mental illness.

His protagonist wears a cute pink school uniform and has pigtails, but — unsurprisingly, given the author's struggles — teams up with two like-minded friends in a group called the Wrist Cut Warriors. The manga subsequently spawned similar tales of woe and accompanying fashion brands, such as Amilige, Jamie Ank and Listen Flavor.

Bill Cleary, clinical director of the TELL Lifeline counselling service in Japan, says that while the concept is "rather dark and morbid," the fashion trend is also likely to be helpful to some people who have no other way of communicating their feelings.

"Plenty of people have problems expressing how they feel," he said. "For some, it is shame, for others it is isolation or fear or some expression of depression, morbidity or fear of death," Cleary told DW.

"But if it can be pulled out of that and placed into this context, then it can be seen as safe and almost playful," he added. "It also permits the creation of a community in which people can talk and share their experiences, all of which are beneficial components."

Many of the young people — and particularly young women — who seek counselling at TELL Lifeline are struggling with body image issues, self-harm and suicidal feelings, Cleary said, so anything that can help an individual "make sense" of their feelings and to externalize those emotions through fashion, jewelry or makeup choices is a positive thing as it helps them not to feel ashamed of themselves.

"If the community can be encouraged — and it can be safe so that it does not take a darker turn — then I think there can be clear benefits to a fashion that expresses feelings that would otherwise remain inside a person," he said.

Japan has the highest number of vending machines per capita in the world. They play a key role in Japanese culture and society, and not just in keeping people in the big cities well hydrated.