Japanese officials have scaled down the events marking the 76th anniversary of the Hiroshima bombings due to the pandemic. Some survivors of the radioactive "black rain" have only recently been granted medical benefits. 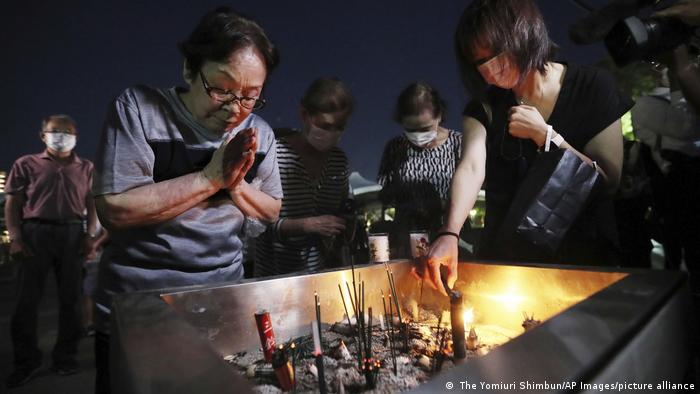 The atomic bomb in Hiroshima instantly killed about 70,000 people, with another 70,000 dying in the following days and months

Survivors of the 1945 Hiroshima blast marked the anniversary of the bombing at Hiroshima's Peace Memorial Park on Friday. Their relatives and several Japanese officials also attended the small ceremony. 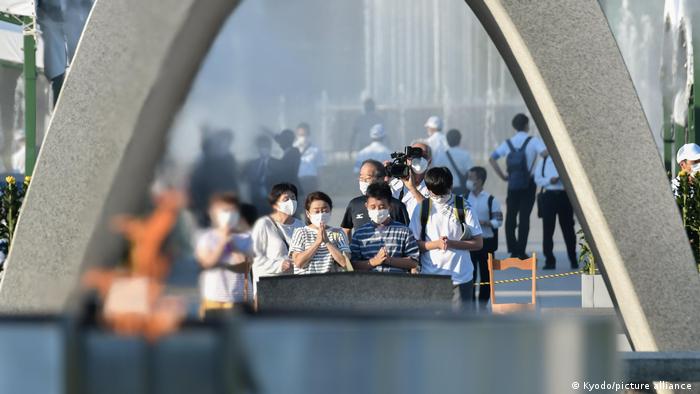 The main event was held in Hiroshima's Peace Memorial Park

In a speech, Hiroshima's Mayor Kazumi Matsui urged global leaders to put an end to the use of nuclear weapons. "Nuclear weapons, developed to win wars, are a threat of total annihilation that we can certainly end, if all nations work together. No sustainable society is possible with these weapons continually poised for indiscriminate slaughter," he said.

Japanese Prime Minister Yoshihide Suga, who was also in Hiroshima, said the city has grown into a symbol of peace.

"We have vowed to do our utmost to realize a world free of nuclear weapons," Suga tweeted.

However, media reports said Suga had accidentally skipped over a page of his speech on the occasion. Kyodo news agency reported the skipped part included comments about how Japan was the only nation to have suffered an atomic bombing, and wished to see a world free of nuclear weapons.

The discrepancy between the prepared remarks and the speech given by Suga was noticed when public broadcaster NHK stopped displaying subtitles. The prime minister has since apologized for the change.

Japan is currently hosting the Tokyo 2020 Olympics. The Games did not hold a minute's silence to mark the occasion, which caused disappointment among many.

The authorities have decided against holding large gatherings due to the coronavirus risk. Suga, who has been criticized for holding the Olympics as cases are on the rise in Japan, said the government did not believe the games were causing a spike in infections.

The bombing of Hiroshima and Nagasaki

On August 6 and 9, 1945, the US bombed the Japanese cities of Hiroshima and Nagasaki, killing 140,000 and more than 70,000 respectively. Japan surrendered on August 15, putting an end to World War II. Many survivors have lasting injuries related to the bombing and resulting radiation.

Last month, the government granted medical benefits to survivors of "black rain" following the bombing. They were previously denied aid because they were located outside a government-set boundary, and had to fight a lengthy battle to have their health problems recognized.

The Treaty on the Prohibition of Nuclear Weapons came into effect in January this year, after years of civil efforts, including those by the atomic bombing survivors. It has been ratified by more than 50 countries; however, nuclear powers including the United States, Britain, France, China and Russia have rejected the treaty.

Germany as well has not yet signed the treaty, which would prohibit its signatories from producing, stockpiling, selling and using nuclear weapons. Japan, which relies on the US nuclear umbrella, has also refused to ratify the document.

With only days to spare, Russian President Vladimir Putin has signed off on the law that would keep the Obama-era nuclear treaty in place. The move follows a phone call with US President Joe Biden.

Foreign Minister Heiko Maas made the plea on the eve of the 75th anniversary of the bombing of Hiroshima. "The world must not forget what happened," he said, urging nuclear powers to abide by existing treaties.

Washington and Moscow seemed poised for a breakthrough on limiting nuclear weapons with time running out on the 2011 New START treaty. Russia is now ready to freeze the number of nuclear warheads if the US does the same.