Nuclear weapons ban to enter into force despite US opposition

The UN Treaty on the Prohibition of Nuclear Weapons needed a minimum of 50 states to ratify it. The 75th anniversary of Nagasaki and Hiroshima atomic bomb attacks prompted a wave of countries sign up. 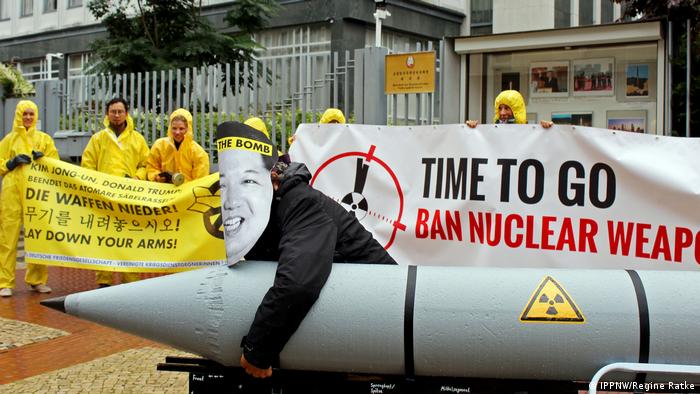 An international treaty banning nuclear weapons will come into force after it reached the minimum number of ratifications, according to a UN official on Friday.

Honduras became the 50th and final country to ratify it, "triggering entry into force," tweeted the International Campaign to Abolish Nuclear Weapons (ICAN), a coalition of non-governmental organizations that won the 2017 Nobel Peace Prize for its key role in bringing the treaty to fruition.

The Treaty on the Prohibition of Nuclear Weapons — which bans the use, development, production, testing, stationing, stockpiling and threat of use of such weapons — was adopted by the UN General Assembly in July 2017 with the approval of 122 countries.

A wave of countries ratified the agreement in recent months, as the world marked the 75th anniversary of the nuclear bomb attacks on Nagasaki and Hiroshima, AFP news agency reported.

Jamaica and Nauru signed up just a day before Honduras.

Read more: Nuclear warfare: How Sweden and Germany plan to curb the threat

'A victory for humanity'

"This is a new chapter for nuclear disarmament. Decades of activism have achieved what many said was impossible: nuclear weapons are banned," ICAN's Executive Director Beatrice Fihn stated.

"Today is a victory for humanity, and a promise of a safer future," Peter Maurer, president of the International Committee of the Red Cross (ICRC) tweeted.

The clutch of nuclear-armed states, including the United States, Britain, France, China and Russia, have not signed the treaty. They maintain their arsenals serve as a deterrent and say they remain committed to the nuclear Non-Proliferation Treaty, which seeks to prevent the spread of nuclear weapons.

The US has actively opposed the treaty, urging those that had already ratified it to withdraw their support, in a letter obtained by news agency the Associated Press.

The five nuclear powers and NATO's allies "stand unified in our opposition to the potential repercussions" of the treaty, the US wrote in the letter.

"We believe that you have made a strategic error and should withdraw your instrument of ratification or accession," the letter stated.

Campaigners hope that the treaty coming into force will have the same impact as previous international treaties on landmines and cluster munitions: it stigmatized their stockpiling and use, influencing countries that did not sign up to change their behavior.