Faced with a shrinking workforce, Japan has made it easier for migrant workers to get a visa. Conservative critics are concerned about the impact of mass immigration on Japanese society. Julian Ryall reports from Tokyo. 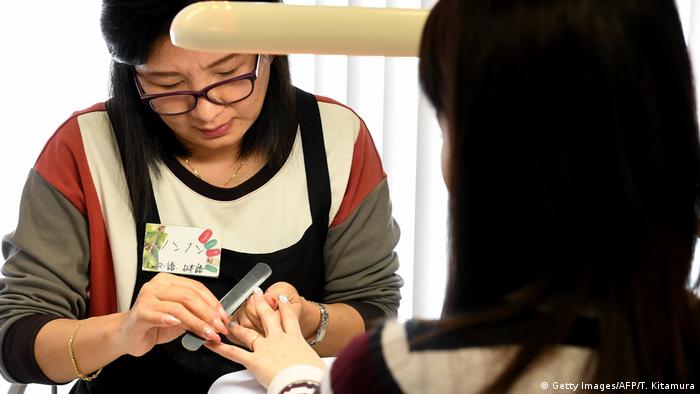 New Japanese visa regulations went into effect on April 1, allowing more migrant workers to enter Japan and take up some of the tens of thousands of blue-collar jobs that are currently unfilled.

While the Japanese business community welcomed the new regulations with a sigh of relief, there are many in Japan who say that the government has made a mistake and is putting people's jobs, social harmony, and even national security at risk.

The legislation, which was passed by the Diet in December 2018, includes major revisions to the previous system for foreign trainees.

Read more: Japan struggles with English-language signs ahead of 2020 Olympics

The new visa has two versions, and both require an applicant to be sponsored by a Japanese company. Prospective workers must also provide evidence that they have passed a number of tests, including a Japanese language exam.

Fourteen industries, including food services, cleaning, construction, agriculture, fishing, vehicle repair and industrial machinery operation, are covered by the first type of visa, which is aimed at those with limited work skills. The worker's stay would be limited to five years, with the option of visa renewals. The foreign workers would not be permitted to bring their family members to Japan.

However, the second type of visa permits skilled workers to bring their families to Japan if they meet certain criteria. There has been criticism that the government under Prime Minister Shinzo Abe has opened a door to the permanent settlement of immigrants in Japan.

The government insists that the workers are only in the country temporarily and are not immigrants.

Industry analysts say Japan's labor shortage needs to be addressed urgently, although they warn that the 47,550 visas that are expected to be issued in the first year, and the 345,000 likely to be provided over five years, will still fall short of what domestic industries require.

"Government statistics and industry are both telling us that the labor market is completely empty," said Martin Schulz, senior economist for the Fujitsu Research Institute in Tokyo.

Read more: Cases of death from overwork soar in Japan

"With the boom in the construction sector ahead of the 2020 Tokyo Olympic Games, companies are becoming desperate," he told DW. "They are finding it very hard to fulfill their current project requirements and they are refusing to take on new projects."

"Companies that want to move to new office space are being told to forget about it for the next two years," he said, adding that it is a similar story in virtually every sector, even in rural economies and agriculture.

Perhaps the most serious indicator of worker shortage can be seen at Japan's ubiquitous 24-hour convenience stores. License holders are struggling as they work long hours to keep their doors open and meet the requirements of their franchise agreements.

In recent years, Japan has seen more women enter the workforce along with an increasing number of older people either putting off retirement or returning to their former companies because they are needed.

But even with all those measures, Schulz pointed out that too many positions remain unfilled.

In a press conference shortly before the new visa regulations went into effect, Nobuyoshi Aoyama, a senior official at the Japan Chamber of Commerce and Industry, applauded the government's actions.

"We appreciate the new system as it tackles the labor shortage issue," he said, adding that it is also vital for the country to bring about the "smooth integration of foreigners" into workplaces and communities.

However, economic analyst Schulz said that there were plenty of people with misgivings, citing demonstrations in front of the labor ministry and protests at companies.

"There is a lot of resistance within the ruling Liberal Democratic Party from their constituencies, where there is concern about the impact that thousands of foreigners will have on their communities," he said, adding that Japan "has no choice" but to open its doors to foreign workers.

"Even with more automation and robots, there are simply not enough people."

"I see this number as a test case for the country as they experiment with the new regulations and the integration of foreigners into Japanese society," he said. "If these people can fit in, then perhaps the rules will be relaxed further in the future and more foreigners can come with their families."

Yoichi Shimada, a professor of international relations at Fukui Prefectural University, said that the shortage of employees is "crippling" many industrial sectors, while Japan's falling birthrate and aging population indicates that there is unlikely to be any short-term solution to the problem.

"It is understandable that industry has put pressure on the government to pass these new regulations on visas and that companies are relieved that some of their staffing problems are going to be resolved," he said.

"But nothing is being done to address concerns about so many foreigners coming to Japan," he added.

Rather than social assimilation or language barrier issues, Shimada said workers' country of origin concerned him the most, adding that he supports the careful screening of foreign applicants.