Less than 18 months ahead of the Olympic and Paralympic Games in Tokyo, visitors are still struggling to comprehend the "Japlish" that the locals say is completely understandable. Julian Ryall reports from Tokyo. 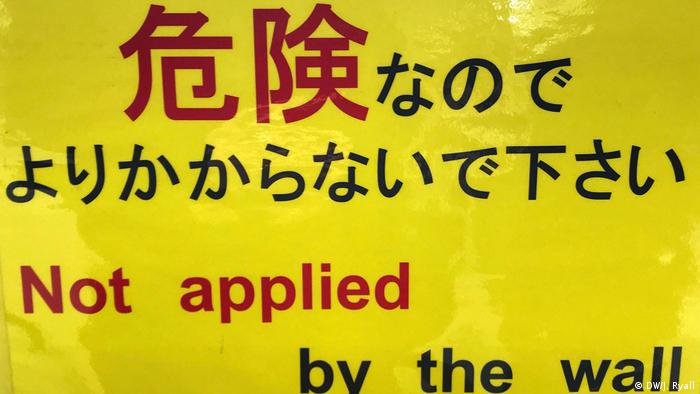 With a little over a year to go until Tokyo hosts the Olympic and Paralympic Games, Japan's tourism authorities have called on the travel sector to get its act together and to provide signs and directions in English and other languages that are comprehensible rather than just a best guess.

The Japan Tourism Agency has announced the results of a two-month investigation into the websites operated by 85 train and bus companies across the country, as well as verifying the accuracy of foreign-language signage in towns and cities. And the results have been disappointing.

One transport company refers to children as "dwarfs" in its signs while another includes the instructions, "What happens to the children fare from what age?" A sign at Jimbocho subway station in central Tokyo reads, "The Toei Shinjuku and Toei Mita Lines can't take it," while a sign at the former prison in Hakone reads, "Put off your guilty shoes and come in the prison politely." 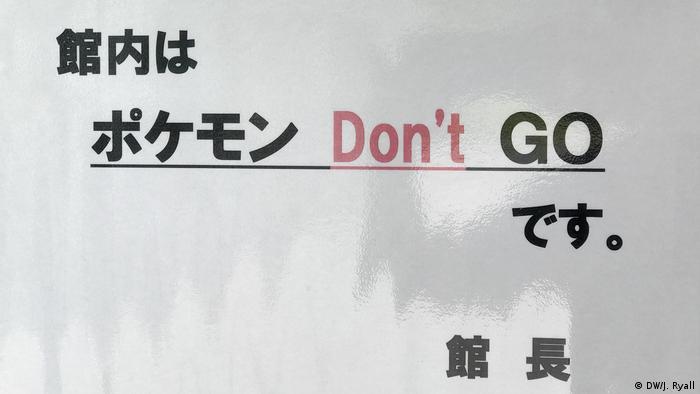 Eric Fior, who has lived in Japan for 15 years and runs a French language school in Yokohama, was stunned at the message in French on the front of a pamphlet for a museum dedicated to telling the story of Japanese nationals abducted by North Korean agents.

"I could not believe what I was reading," he told DW. "This is a museum that tells the story of the abductions and demands that North Korea return the people it kidnapped, but the French-language message on their leaflet says they must be sent back to North Korea."

Fior's confusion only deepened when he contacted the museum to point out the error and suggesting an alternative phrase that they should use to communicate the message that the abductees must be allowed to return home to Japan.

Read more: Tokyo struggles with smoking ban ahead of Olympics

"I received a message in Japanese saying that the words were correct and that they would be perfectly understandable to a Japanese person," he said. "I was shocked. Why would a Japanese person be reading the French version of the leaflet instead of the Japanese one? And what about any native French speakers who visit the museum and read this message? It makes them look ridiculous."

Given that the office in charge seemed reluctant to even consider correcting its glaring mistake, Fior said he did not bother replying to their message.

Gregory Hadley, a professor of applied linguistics and Western cultural studies at Niigata University, says Japan has a very long history of English-language signage, even in smaller cities like Niigata, where prisoners of war were held here during World War II.

"This is a socio-linguistic issue," he told DW. "We have to understand that none of the English-language signs that we see are really intended for English speakers. These are signs that have been written by Japanese people for Japanese readers to demonstrate that they are living in a sophisticated, cosmopolitan society that is connected to the rest of the world."

Hadley says the tourism authorities' efforts to get travel companies to make sure their messages make sense for foreign visitors are "two little, too late," as well as being unlikely to have much effect as the cost of professional translators and reprinting leaflets and replacing signs is likely to be prohibitive for many, especially smaller companies.

"The government would probably have had more success if they had started much earlier — we have less than 18 months to go until the Games now — and connected the campaign to the notion of being a sophisticated and advanced nation that knows foreign languages," he added.

There may be resistance to altering foreign-language messages because of the loss of "face" that it might cause the person charged with producing a message that subsequently turns out to be incorrect, Hadley agreed, although a more important consideration might be that "an employee might just be too worn out to go through the entire process of getting a message translated, having it approved by countless other people or committees in his organization and then getting it printed."

Yet Japan's rapidly rising tourist numbers suggests that more should be done to help them navigate the country's accommodation, museums and transportation systems. A mere 7.1 million foreigners visited Japan in 2011, a number that soared past 30 million in 2018, and the nation is on course to hit the target of 40 million set by the government for 2020.

Yet foreigners working in Japanese companies and organizations have taken to social media to tell their own tales of inflexible thinking among their employers and to say that they anticipate little to change, even if "Japlish" is widely mocked in 2020.

"When I worked in a Japanese company, my Japanese colleagues would bring Google translated text for me to correct," said one poster on the Japan Today web site. "[I] would take my time and correct it, only to discover to my chagrin later on that the Google translated version was used instead."

Another poster said, "I work in a local government in Japan and a lot of my work involves translation, and I have to say that the amount of machine translation that goes on tourist web sits is absolutely depressing."

"Sometimes, I'm asked to check them, but what's the point if it's all translated automatically? I'm also asked to promote them through English-speaking channels and, as you'd expect, people either laugh of express disappointment."

The Paralympics: The spotlight shines only briefly 27.08.2021

The Paralympics tend to stimulate and accelerate a debate in host cities about accessibility and participation for people with disabilities. But a legacy that lasts beyond the Games is rare.