The Japanese government says legislation is needed to ensure the security of the public during the 2020 Tokyo Olympic Games, but critics say it can be used to curtail fundamental rights. Julian Ryall reports from Tokyo. 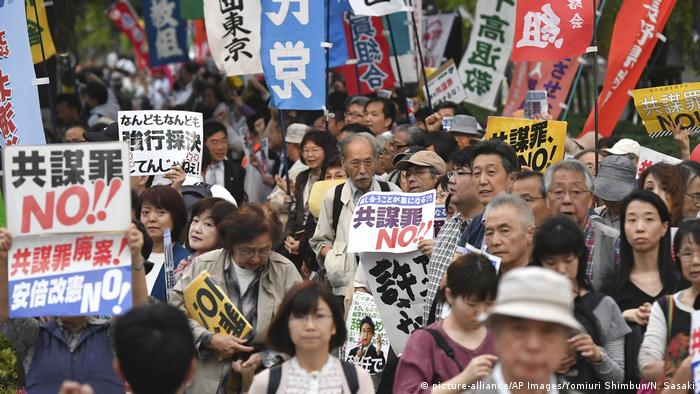 The Japanese government has passed a law that it claims is designed to punish anyone plotting or preparing to carry out a terrorist attack in the country, although the legislation has immediately been criticized by the UN and analysts who describe it as placing "handcuffs on democracy and civil liberties."

The "conspiracy law" was passed by the Diet in an ill-tempered session that went into the early hours of Thursday morning, with thousands of protestors outside the building chanting slogans against the legislation, Prime Minister Shinzo Abe and his ruling Liberal Democratic Party (LDP).

Despite being heavily outnumbered in the chamber, the opposition parties put up a staunch fight against the legislation and were outraged when the government announced that it would by-pass a vote in the Upper House, accusing Abe of attempting to prevent the details of the bill from being closely examined. 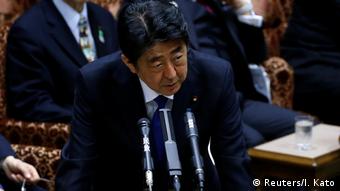 Renho, the leader of the opposition Democratic Party, described the government's tactic as the "ultimate form of railroading."

Abe, who survived a no-confidence motion against his government shortly after the conspiracy bill was enacted, claimed the legislation was necessary to prevent terrorist attacks in the run-up to and during the 2020 Tokyo Olympic Games.

"It is only three years until the Tokyo Olympics and Paralympics and I would like to ratify the treaty on organized crime as soon as possible so we can firmly cooperate with international society to prevent terrorism," Abe said.

Critics claim, however, that while the law has given the authorities the capability to prosecute 277 crimes as a conspiracy, few appear to have any directly link to terrorism. Instead, they point out, the statutes outlaw discussing going hunting for mushrooms in conservation areas, forging postage stamps, sit-in demonstrations and organizing an unlicensed bicycle race.

"This legislation has just given the police here sweeping new powers to crack down on all sorts of activities that, as far as I can see, have absolutely nothing to do with organized crime or terrorism," said Jeff Kingston, director of Asian Studies at the Japan campus of Temple University.

"The government has ignored parliamentary procedures to ram this through and I believe that most Japanese will be incredulous at the law as it has been delivered," Kingston told DW. "This can be used to curtail a person's right to privacy, the right to express dissent, the right to know and a person's freedom of expression."

"They have placed handcuffs on democracy and civil liberties, and the ultimate irony is that they claim to be doing it in the interests of protecting people," he added.

The government has attempted to pass similar conspiracy bills four times previously, but all have fallen short in the Diet. To ensure this version won parliament's approval, the number of crimes it specified was reduced and the government played up the threat that terrorists pose to the safety of the 2020 Olympic Games. It also insists the new legislation was necessary to enable Japan to ratify the 2000 UN Convention against Transnational Organized Crime.

Critics are far from convinced that the wide-ranging regulations will not simply be used to gag anyone who speaks out against the authorities in any way.

"The government is creating a surveillance state and has declared 277 new reasons for the authorities to be able to tap a telephone or carry out surveillance on someone," Kingston said.

"And there is a strong case for this legislation to be compared to the notorious 1925 Peace Preservation Law, which was used by the government of the day to round up communists and set Japan down the dark road to the militarism of the 1930s," he underlined.

And that ties into Abe's desire to rewrite the constitution, which conservatives believe was imposed upon a defeated Japan by the vengeful Allies after the war. A section of the constitution echoes the 1948 International Declaration of Human Rights, although the LDP's 2012 manifesto said that section should be replaced with a passage that imposes duties and obligations on the Japanese people.

Read: Can Japan stub out its smoking habit?

Criticism from the UN

Other critics of the law include the Japan Federation of Bar Associations, while Joseph Cannataci, the United Nations special rapporteur on the right to privacy warned in May that the broad terms of the law could be interpreted equally broadly and lead to undue restrictions on privacy and freedom of expression.

Yet others say the concerns are being blown out of proportion.

"The reason the opposition is so angry is because it is the job of the opposition to be angry and claim that this is part of a plot to plunge Japan back into pre-war militarism," said Jun Okumura, a political analyst at the Meiji Institute for Global Affairs.

"The important thing to remember is that to counter the weight of the government there is a need for an independent judiciary, an independent public prosecutor's office and a robust and free media, and Japan has all those things," he told DW.

"I do not see any practical fallout from the introduction of this new law," he added. "It would take a sea-change in Japan's security environment and social cohesion for things to get so bad that the government would do what the opposition is suggesting they will use this law to do. It won't happen."

Tokyo struggles with smoking ban ahead of Olympics

Japan's capital city is fuming over an anti-smoking bill ahead of the 2020 Olympics. Previous Olympic host cities have passed anti-smoking measures, and the IOC and WHO are hoping for the same in Tokyo. (02.05.2017)

Despite decades of promises that women would have the chance to "shine" in Japan's corporate and political worlds, the country lags behind other industrialized nations in gender equality.

Why the pro-Trump QAnon movement is finding followers in Japan 25.01.2021

After emerging among conspiracy theorists in the US, the far-right QAnon movement is expanding to include a small but dedicated band of adherents in Japan. Julian Ryall reports from Tokyo.

Japan and the US have shared concerns about China's aggressive expansionist policies in the Indo-Pacific region. This will be Biden's first in-persopn meeting with a foreign leader since becoming president.