Japan′s hemp business wants to distance itself from image of narcotics | Asia| An in-depth look at news from across the continent | DW | 26.01.2021

Japan's hemp business wants to distance itself from image of narcotics

For centuries, hemp was grown across Japan and used in cuisine, clothing and traditional rites. It suffered an image problem during the post-war years and has not fully recovered. 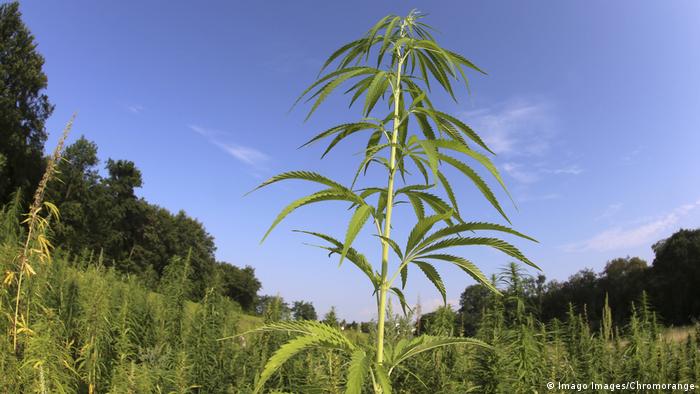 For centuries, hemp was a common crop found across Japan

The announcement that the amount of marijuana in liquid form seized by customs officials in Tokyo in 2020 soared nearly 70 times from the previous year has attracted headlines in a country that still operates a zero-tolerance policy on all forms of narcotics. For Junichi Takayasu, founder of the Hemp Museum, the dramatic media coverage of the figures is deeply unfortunate.

All too often, he says, the Japanese media, local authorities, the police and the public simply conflate cannabis with hemp, a crop that has a history that stretches back centuries in Japan, and which Takayasu would like to see once again flourishing in the fields.

But he admits that it is an uphill task to convince people of the benefits of a crop that has traditionally played an important role in Japanese culture.

"Japanese people used to utilize hemp for many things in the past, but because of the laws that were introduced, people have forgotten about the past and how hemp was used," he told DW.

"Hemp was grown in many parts of the country and used in clothing, household items and even religious events, but that has all gone," Takayasu said. "I want to remind people about our hemp culture, and that is why I opened the museum in 2001. But I think it is going to be difficult to change the minds of enough people."

Work Places: The return of jute and hemp

Work Places: The return of jute and hemp

For centuries, hemp was a common crop found across Japan that was used in the sacred "suzunoo" ropes that adorn shrines and in the ceremonial belts of sumo wrestlers. On a more day-to-day basis, fibers from the stalks of hemp plants were used to produce clothing, including shirts, as well as mosquito nets, fishing nets, paper and in traditional medicine, while the seeds of the plant were used as spices in cooking.

The ban on cannabis and related products was introduced after Japan's defeat in World War II, when the primarily American occupation government effectively imposed a new constitution and laws on Japan that reflected US standards of the day.

The domestic hemp industry has contracted dramatically, from 5,000 hectares under cultivation in the peak year of 1952, when 37,300 farmers were growing the crop, to a mere 7.6 hectares of land in 2015. As of March 2017, only 30 individuals still had permission to grow hemp, with 90% of domestic production coming from Tochigi Prefecture, north of Tokyo.

Takayasu's museum is in the Tochigi town of Nasu, once a community that earned much of its wealth from hemp.

Requirements for permits and oversight of the industry were tightened in 2017 after the president of a hemp-growing company in Tottori Prefecture, in the far southwest of Japan, was arrested along with a number of local people after being caught with dried hemp for smoking. The prefecture has subsequently banned all production of hemp.

The new regulations, which require that new licenses to grow hemp must be reissued every year, and the shortage of laborers in Japan's traditional farming communities means that it is becoming increasingly difficult for hemp farmers to remain in business.

Takayasu and others who are keen to protect the nation's agricultural heritage fear that the industry will die out within the next generation, with just 10 people in Japan now reportedly able to make yarn and spin fabric from the hemp plant.

In an effort to distance the industry from associations with narcotics, producers have switched to growing varieties of the plant that have virtually no narcotic effects, yet there is little indication that the authorities are planning to change their stance on hemp.

Despite a long history in Japan, the government appears to have been swayed by US attitudes towards the crop immediately after the war – and not changed since.

And while Canada, some US states and countries in Europe are legalizing "soft drugs," and the authorities in other jurisdictions are effectively ignoring anyone caught with small amounts of recreational narcotics for personal use, Japan remains committed to a blanket ban on all drugs.

Yet there are some small shoots of resistance to the official line, with Akie Abe, the wife of former Prime Minister Shinzo Abe, expressing in the past her support for the domestic hemp farming industry and claiming that she once considered applying for a growing license.

Similarly, a number of foreign companies, notably from Canada, are exploring the possibility of importing hemp-based food products, such as hulled hemp seed, hemp seed oil and hemp-based protein powders.

Takahiro Yashiro opened Asemoha's Hemp Shop in Tochigi eight years ago to sell a limited range of domestically produced hemp products and a growing number of imported items. Much of his business is online and he says that demand is rising.

"We sell a lot of hemp nuts and oil, along with T-shirts and other items of clothing made out of hemp fabric," he told DW. "Virtually, all of what we are selling at the moment has to be imported from abroad, mainly Europe, Canada or China, but we know there is a market for these items here and I am hopeful that attitudes might change in the future."

"It would be very unfortunate if this entire industry was simply forgotten," he added.