Accompanying Maezawa on his trip to space were his assistant Yozo Hirano and Russian cosmonaut Alexander Misurkin.

Prior to setting off from the Russia-leased Baikonur cosmodrome in Kazakhstan, 46-year-old Maezawa tweeted that the journey was a "dream come true."

On their way to the launch pad, the three men were played a Soviet-era song that is traditionally played for cosmonauts before their flights. This time, however, parts of the song were sung in Japanese. 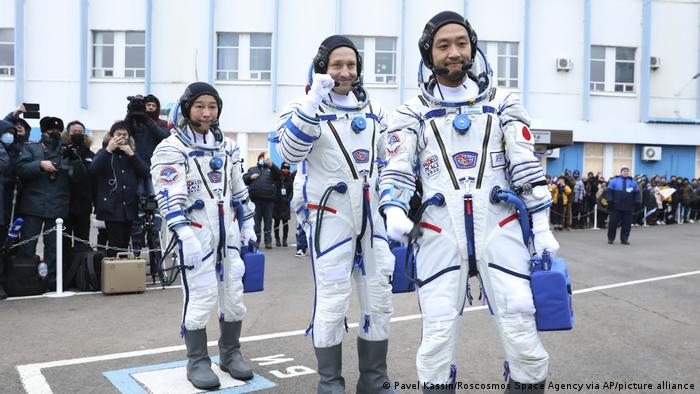 Maezawa's assistant, Yozo Hirano (left), is joining the billionaire to document his 12 days in space

What will they do on the ISS?

After a six-hour ride on a Soyuz MS-20 spacecraft, the three-person crew successfully docked at the Poisk module at the ISS.

Russian cosmonaut Anton Shkaplerov welcomed the travelers to the ISS, saying that "we have already prepared dinner" and await their arrival on board when the hatches open.

Upon entering the station, the three will then spend 12 days on the station, with Maezawa set to share his experiences on his YouTube channel — all of which will be documented by his assistant Hirano.

Maezawa, an online fashion tycoon and art collector, said he wants to accomplish 100 tasks while onboard — including a badminton tournament.

An international crew of seven people is currently orbiting the Earth on the ISS, including a German astronaut, a Japanese astronaut and two Russian cosmonauts.

Billionaires in a race to space

Maezawa is the latest in a series of wealthy men who have made commercial tourism flights to space this year — following fellow billionaires Richard Branson, Elon Musk and Jeff Bezos.

Maezawa is already planning his next trip to space — a mission to travel around the moon in 2023, which will be operated by Musk's company, SpaceX.

The data gathered by the latest mission could "help us find out whether there is life elsewhere in our universe and if there is another planet like Earth," the European Space Agency said.

SpaceX launch: Four astronauts, including one German, head to ISS

A crew of four astronauts finally launched from Cape Canaveral and are set to dock at the International Space Station after a delay of nearly two weeks. The crew includes German astronaut Mathias Maurer.