There were bows and "banzai" chants at the Yasukuni Shrine as politicians, veterans, and nationalists paid their respects to the more than 2 million Japanese who died in World War II. Julian Ryall reports from Tokyo. 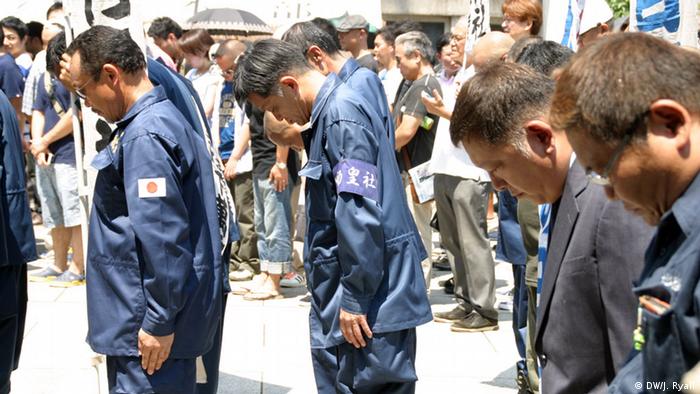 On a table at a refreshment stand on the grounds of Yasukuni Shrine, Tadashi Shimomura set up two framed photographs. In front of them, he placed a bottle of ice-cold lemonade as an offering.

One of the sepia-tinted images was of a unit of young pilots with their commanding officers that was taken in Manchuria in February 1945. The second was of Hidemi Sato, the uncle of one of his friends who had just turned 18 when he died in a kamikaze attack against the US fleet off the southern islands of Okinawa.

"There were 15 pilots in his unit; nine of them died in a kamikaze attack on March 27, while the rest were killed in a second attack on April 3," said Shimomura, the president of a food-processing company in Tokyo. Sato was in the second assault.

"I come here every month to remember their sacrifice, but I always make sure I come on August 15," he said. "The anniversary of the end of the war is an important date for me and all Japanese people, and I think it is necessary for us to remember what happened.

"The peace that we enjoy today is because of the sacrifices of men like Sato." 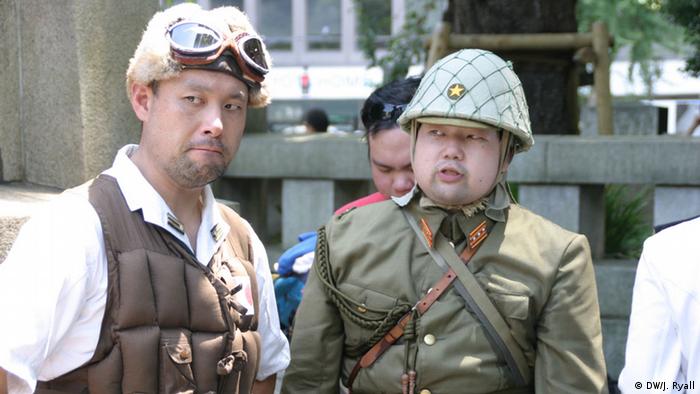 On Saturday, Japan marked 70 years since the nation's surrender, with Emperor Akihito and Prime Minister Shinzo Abe making speeches at a ceremony at the Nippon Budokan Hall attended by some 5,000 relatives of victims of the war.

"We pledge never to repeat the horrors of war, to carve out the future of this country for the sake of the generation that is alive at this moment and for the generations of tomorrow," Abe said.

The emperor expressed his own "deep remorse" over the war in his address, saying, "Reflecting on our past and bearing in mind the feelings of deep remorse over the last war, I earnestly hope that the ravages of war will never be repeated."

After the speeches, a minute's silence was observed at 12 p.m., the precise time that a recorded address by the Emperor Hirohito, the present emperor's father, was played over the radio in August 1945 calling on the people to "endure the unendurable" and accept the nation's surrender. 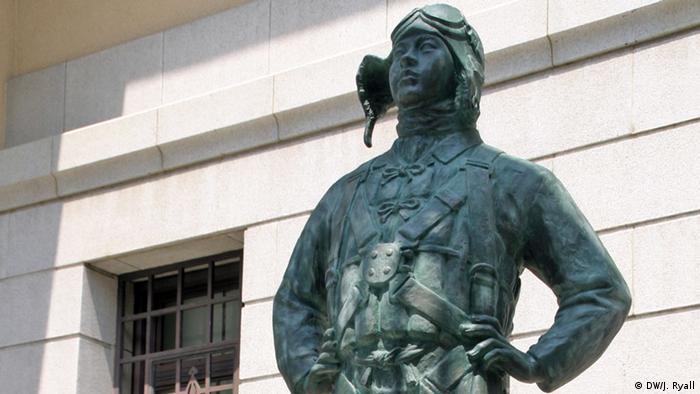 Offerings of water, sake and green tea were laid in front of the statue dedicated to kamikaze pilots

The same minute's silence brought visitors to the nearby Yasukuni Shrine to a halt. Thousands of people queuing to pay their respects in front of the main "haiden," or hall of worship, bowed their heads.

But, prominent among the veterans leaning on their canes and the elderly women dressed entirely in black who had come to pay their respects, were the knots of various right-wing groups.

Many wore quasi uniforms of coveralls with rising sun symbols and combat boots. At the head of each group, a standard bearer held the Japanese flag aloft. After the minute's silence, the factions' leaders took it in turn to give three "banzai" shouts.

Hiromichi Moteki, secretary-general of the Society for the Dissemination of Historical Fact, said he was "disappointed" by the tone of the statement by the prime minister on the eve of the anniversary, in which Abe apologized for the "immeasurable damage and suffering" the nation's military caused before and during the war.

"We have no reason to apologize to other nations in Asia that became independent because the Japanese military took on the European colonial powers," Moteki told DW. "We helped them achieve freedom and they should be thanking us." 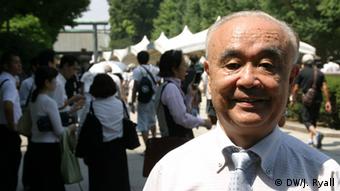 Like many nationalists, Moteki believes that Japan invaded and occupied parts of the Pacific and mainland Asia to create a "co-prosperity sphere" and that it was liberating its neighbors from colonialism.

Equally, Moteki and many on the right in Japan are convinced that China triggered the Sino-Japanese war in August 1937, there was no massacre of civilians in Nanking four months later, the United States provoked Japan's attack on Pearl Harbor in 1941 and "comfort women" were not coerced across Asia and the Pacific to serve as prostitutes for Japan's soldiers.

"To make Japan apologize again and again is racial discrimination and the self-criticism we see in some parts of Japanese society today is the result of the war-guilt that was forced on us by the Allied powers after the war," he said.

China and both North and South Korea criticized the address by Abe on Friday for failing to offer a personal apology to the victims of the war and "lacking sincerity." Media in China and South Korea were swift to condemn visits to Yasukuni Shrine on Saturday by three ministers in Abe's cabinet, with a further 100 politicians also paying their respects at the shrine.

Abe did not visit Yasukuni in person, but sent an aide with a ritual offering in his stead.

Opinion: Time goes by, but not guilt

Despite acknowledging Japan's wartime aggression, Shinzo Abe did not give a reconciliation speech. But that was not to be expected from the nationalist PM, says DW's Alexander Freund. (14.08.2015)

Japan has marked 70 years since World War Two ended, with its emperor expressing remorse over the war. A closely-watched speech by Prime Minister Shinzo Abe has been criticized by leaders in China and Korea. (15.08.2015)