Japan: Descendant of Ryukyuan royalty demands return of ′stolen′ bones | Asia | An in-depth look at news from across the continent | DW | 31.05.2021

Advocates are calling for the repatriation of the bones of the royal family from the former Ryukyu Kingdom, now known as Okinawa. A case has been opened against Kyoto University, which is in possession of the remains. 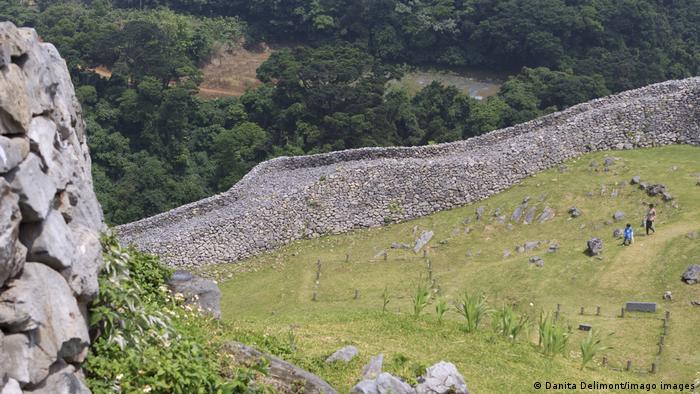 The tombs of Tsuyoshi Tamagushiku's descendants are located in Nakijin, Okinawa

Since he was a young boy, Tsuyoshi Tamagushiku had routinely visited the Mumujana tombs to pay his respects to the royalty of the former Ryukyu Kingdom, now known as Japan's Okinawa Prefecture.

Tamagushiku, a direct descendant of Ryukyuan royalty, told DW that he was later shocked to learn that his ancestors' remains had not actually been kept in the tombs, but were rather stored in boxes at Kyoto University for over 90 years.

The Ryukyu Kingdom was once an independent nation, but was incorporated into Japan as Okinawa Prefecture in 1872.

Tamagushiku has now launched a legal campaign to have the remains of the Ryukyuan royal family returned to the tombs, which are in the village of Nakijin.

He and his fellow plaintiffs hope that the recent trend of museums and universities repatriating looted cultural artifacts will be sufficient pressure to spur one of the most prestigious universities in Japan to follow suit.

"I only discovered that my ancestors' bones are not in the tomb four years ago, and that they had been taken by scientists from what was then Kyoto Imperial University in 1929," Tamagushiku said. "Very few people realized it at the time, as they did not consult with the descendants of the kings or local people, but only got permission from the prefectural authorities and the local police."

According to Ryukyuan custom, the bones were simply placed in the tomb, rather than being buried, and the scientists only had to gather the remains and reseal the tomb behind them, said Tamagushiku.

In all, the remains of 64 individuals were taken, some dating back around 600 years.

"We have started a lawsuit against the university demanding that they return the remains of my ancestors, but so far the university has failed to communicate with us," he said. "My biggest fear is that the bones have been the subject of scientific tests and examinations, and that makes my heart ache."

"Kyoto University sees the bones as merely objects that are to be studied, but even today the Ryukyuan people pay their respects at the Mumujana tombs, so this is a matter of concern for all of the people of Okinawa."

Tamagushiku is one of five plaintiffs who brought a case against the university in December 2018. Hearings have taken place at the Kyoto District Court and the plaintiffs hope that a ruling will be announced before the end of the year.

Yasukatsu Matsushima, a professor at Ryukyu University and the lead plaintiff in the case, told DW that Kyoto University professors took additional remains from other parts of Okinawa, as well as remains belonging to what are now parts of China, the Koreas and Taiwan. In total, the university is believed to have the remains of more than 1,400 individuals in its collection.

"The taking of the remains of our ancestors is essentially an organized crime carried out by the university, that was only made possible through the annexation and colonization of the Kingdom of Ryukyu," said Matsushima.

A request for information on the collection and the studies that have been carried out on the remains was rebuffed, while a follow-up inquiry made by an Okinawan politician led to the release of deeply worrying information, he said.

The university said it only had documentation for about 751 bodies, and that the remains were stored in plastic boxes, he added.

Bones must be returned 'under international law'

"Under international and domestic law, these remains must be returned," said Matsushima. "Japanese imperialism and colonialism are the root cause behind this problem. This is racial discrimination against the Ryukyuan people and we will continue our fight through the courts."

Kyoto University officials declined to comment on the case, when contacted by DW.

Matsushima said the case is bolstered by the 2007 UN Declaration on the Rights of Indigenous Peoples, which in part states that the plaintiffs "have the right to the repatriation of their human remains."

He is encouraged by similar cases elsewhere, with the US government passing the North American Graves Protection and Repatriation Act in 1990, and the British government approving the return of human remains held in British museums, in 2005.

In late April, the German government reached an agreement with authorities in Nigeria to return hundreds of artifacts known as the Benin Bronzes. The items had been looted by British colonial expeditions before being sold to collections around the world. Experts say, however, that attitudes have started to change.

"Museums are obviously very reluctant to return items from their collections, as that could lead to more claims from other people about other artifacts, but things have certainly changed in recent years and more of these looted items are being returned," said Robert Dujarric, co-director of the Institute of Contemporary Asian Studies at the Tokyo campus of Temple University.

Concerns over disputes with Korea, China

Tokyo is also likely to be concerned that the case will catch the attention of some of Japan's former colonies and lead to demands for the repatriation of remains to the Koreas and China.

Governments in those countries often use Japan's imperial history to score geopolitical points, and Tokyo will be very keen to avoid a protracted argument over the ownership of remains that were looted from the countries more than a century ago, he said.

As for Tamagushiku, he said he is determined to see his ancestors' remains returned by the university.

"I am extremely angry and I feel empty inside," he said. "I stood in front of that tomb and prayed to my ancestors countless times, but their remains had already been stolen for research. I want the university to know that those are human remains, not objects. I want my ancestors to be returned and permitted to rest in peace in the tombs."