More than 200,000 people died in the battle for Okinawa. The US has maintained a heavy military presence on the island since WWII, with the base highly unpopular with the locals and yet of crucial importance to Tokyo. 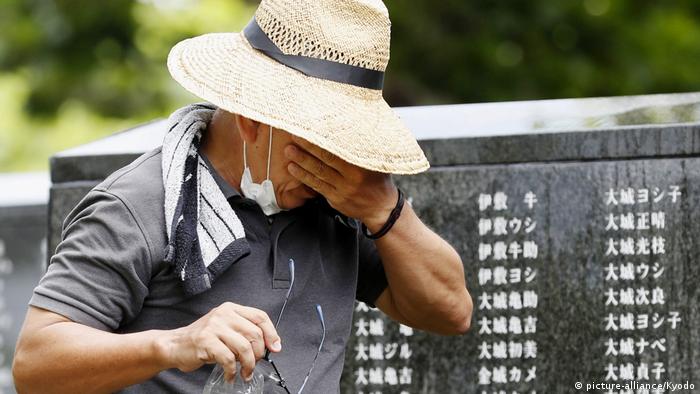 People on the southern Japanese island of Okinawa commemorated the 75th anniversary of the end of the WWII battle for the island on Tuesday.

Unlike most other battles in the Pacific Theater, Okinawa was not evacuated and Okinawan people suffered immensely from both sides.

Many of the civilian deaths came from the forced drafting of locals by the Japanese Imperial Army, from forced suicides and from indiscriminate killing by US soldiers. More than 90% of the buildings on the island were destroyed

To date there are still tensions between mainland Okinawa and mainland Japan, which annexed the formerly independent islands in 1878.

The battle started on March 26 when US troops landed on the Kerama islands, west of the mainland. The US planned to use the island as a base from which to attack the rest of Japan.

After a grueling battle, US forces took the island, which proved to be strategically key. However, the planned land invasion never went ahead as Japan surrendered after nuclear bombs were dropped on Nagasaki and Hiroshima.

Since the war, the US has maintained a major presence on the island, despite strong opposition from the island.

Complaints against US troops

Tuesday's memorial service was held in the Peace Memorial Park in the city of Itoman, the site of the final stage of the battle. The ceremony was greatly reduced due to the pandemic.

Okinawa Governor Denny Tamaki spoke of the US presence in his speech at the ceremony, saying that despite accounting for just 0.6% of Japan's total land mass, it still has to host 70.3% of US military installations in the country.

He said that crimes and accidents committed by US service personnel, aircraft noise and environmental problems such as water pollution "have continued to cause an enormous impact on the livelihoods of Okinawans."

"Since the end of the war, even when Okinawa was deprived of human rights and self-governance under the US occupation, we have steadily walked on the path of reconstruction and development while protecting our culture and sincerity we inherited from our ancestors,'' Tamaki said.

The tropical island, closer to Taiwan than to Japan's main islands, has a large fishing industry but is economically reliant on Japanese holidaymakers and resident US troops.

Tamaki said the tragic history of the island must be remembered accurately and passed on to younger generations.

Today, many people live in places of conflict, or face poverty, discrimination and environmental pollution, and the fear and economic impact from the coronavirus have further divided societies, he said. It was therefore more important than ever for everyone to tolerate differences, trust each other and cooperate, he said.

"We must gather our wisdom and push forward to achieve nuclear weapons ban, war renouncement and lasting peace," Tamaki said.

Despite the existing military base on Okinawa island being scorned by many locals, a majority of voters said "no" to plans to move the facility. A plan to build a new base 50 kilometers away has stalled for many years. (24.02.2019)

Demonstrators endured pouring rain ahead of an advancing typhoon to express their opposition to the US Marine base. Tokyo plans to begin pouring landfill for the new site in the coming days but opponents vow to block it. (11.08.2018)