Will US Navy's alcohol ban in Japan soothe public anger?

The US Navy has banned all its personnel based in Japan from drinking alcohol following a spate of criminal acts involving US troops. But is this move enough to assuage public concern? Julian Ryall reports from Tokyo. The US Navy's decision to bar all its 18,600 personnel stationed in Japan from consuming alcohol is part of the military's efforts to mitigate growing public anger over a string of incidents involving US personnel in recent weeks.

The Navy also halted all off-base liberty for its personnel, with the only exception being "essential activities," such as shopping for food or going to a gym.

The ban was agreed by the military after a US servicewoman was arrested late on Saturday, June 4, in Okinawa, the most southerly of Japan's prefectures and the location of the largest US military contingent in the country.

Aimee Mejia, a 21-year-old petty officer 2nd class, was arrested close to the US air base at Kadena after her car crossed into the oncoming lane and collided with two vehicles. Two people were injured in the accident and Mejia is expected to be charged with dangerous driving resulting in bodily injury as well as drink-driving.

The US military described the incident in a statement as "deeply upsetting," in particular because it occurred during a "period a unity and mourning in Okinawa" ordered after the arrest last month of a former US Marine working as a civilian contractor at Kadena over the abduction, rape and killing of a local woman aged 20.

That incident was shocking, but it was also deeply embarrassing to Washington because the suspect was taken into custody just days before President Barack Obama arrived in Japan to attend the G-7 summit. 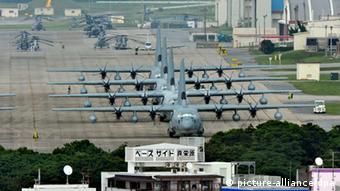 Okinawa hosts the largest US military contingent stationed in Japan

On the eve of the summit, Shinzo Abe, the Japanese prime minister, delivered a public and pointed rebuke to the US president, demanding that he deal "seriously" with violent crimes committed by Americans here. That message has clearly been passed on to the US military's top brass in Japan.

"For decades, we have enjoyed a strong relationship with the people of Japan," Rear Admiral Matthew Carter, commander of US naval forces in Japan, said in a statement issued on Monday.

"It is imperative that each sailor understand how our actions affect that relationship, and the US-Japan Alliance as a whole."

Rear Adm. Carter said the decision to impose the measures was "not taken lightly" but they will remain in place until all personnel have undergone training in the standards that are expected of them and senior commanders are comfortable that every sailor stationed in Japan "understands responsible behavior," the statement added.

Fumio Kishida, the Japanese foreign minister, filed an official protest over the case of alleged drink-driving with Caroline Kennedy, the US ambassador to Tokyo. Kishida demanded that the US enforce measures to prevent such incidents from happening and to punish any service personnel found to have caused accidents. Kennedy described the incident as "highly regrettable."

Top defense officials from nearly 20 countries are gathering in Singapore for a three-day security summit. It comes amid rising tensions in the Asia-Pacific. (03.06.2016)

There has been a US military presence on the Japanese island of Okinawa since 1945, and the islanders are tired of it. They want the rest of Japan to share more of the burden, which includes noise, pollution and crime. (25.12.2015)

Okinawa governor adds roadblock to US base relocation

Plans to relocate a US military base on the Japanese island of Okinawa have hit another snag. The Okinawa governor has revoked approval needed for the move – a further contradiction to plans set in motion by Tokyo. (13.10.2015)

Nevertheless, incidents that tarnish the reputation of the US military in Okinawa continue to come to light. For instance, four US civilians working at Kadena were recently arrested by Japanese police on charges of importing illegal drugs from the US.

"The analytical part of me says that as long as there are bases in Okinawa, then we will continue to see these sorts of crimes because American service personnel are human too," said Jun Okumura, a visiting scholar at the Meiji Institute for Global Affairs.

"Just as there are Japanese who commit murder or drink and drive, there will be Americans who do the same," he told DW. "But I have done some research into this and it turns out that the crime rates among US military service personnel are actually much lower than among the Japanese population in general."

The over-arching problem - and the cause for the hostility of the Okinawan people more than 70 years after the bloody battle for the islands at the end of World War II - is that so many US military bases are still occupying land in these islands while the rest of Japan has very few similar facilities.

"The media coverage is also overwhelmingly opposed to the US forces being in Okinawa, so I can only see this issue as continuing to fester and divide Okinawans," Okumura said. "And we do have to remember that despite all the fury being demonstrated, there are still many people in the islands who are in favor of the considerable US presence."

That support may be waning, however, with an election to the prefectural assembly on Sunday, June 5, demonstrating growing support for the anti-base movement.

Candidates loyal to Governor Takeshi Onaga, who is fiercely opposed to both the US military presence and a plan to enlarge a US base in northeast Okinawa, winning 31 of the 48 seats in the assembly.

"Virtually everybody in Okinawa is angry at the moment because there have been so many incidents," said Yasukatsu Matsushima, a professor of economics at Kyoto's Ryukoku University and an opponent of the base plan.

"Every time something like this has happened since the 1972 reversion of Okinawa to Japanese control, the governments in Tokyo and Washington have promised us that they would control the US military personnel," he said. 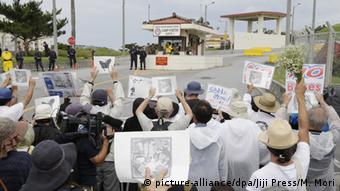 'Virtually everybody in Okinawa is angry at the moment because there have been so many incidents,' says Matsushima

"But those promises are always broken."

Prof. Matsushima - who is also an advocate for independence for Okinawa - said Sunday's election victory now makes it "very difficult" for the governments of Japan and the US to push through the plan to enlarge Camp Schwab so it can take on the functions of Futenma Air Station, in central Okinawa.

"There will be huge and constant protests if they continue with this plan," said Prof. Matsushima. "They do not understand the depth of feeling in Okinawa and the growing sense that the islands must become independent if we want the bases to disappear completely."