The deal is the UK's first major agreement on trade since its exit from the European Union. London has hailed the "landmark" pact, saying it's expected to boost British trade with Japan by $19.5 billion annually. 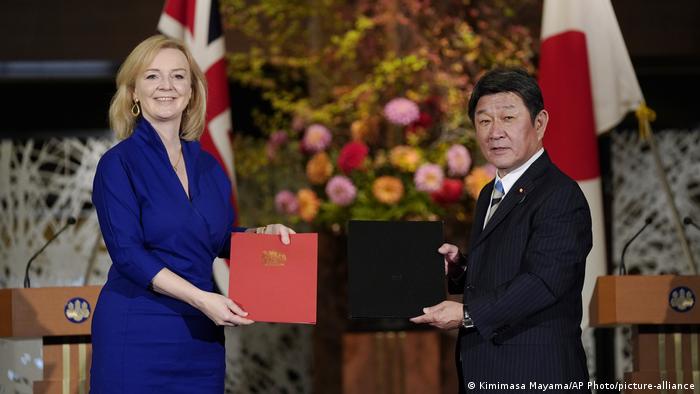 Japan and Britain on Friday formally signed a bilateral free trade agreement that is set to kick in when the Brexit transition period — and the UK's economic relationship with the European Union — comes to an end.

The UK-Japan Comprehensive Economic Partnership Agreement (CEPA) covers a range of sectors, from food and car parts to textiles and technology. London has said the pact will boost trade with Japan by 15 billion pounds ($19.5 billion; €16.5 billion) annually and make it easier for British companies to do business in Japan.

"How fitting it is to be in the land of the rising sun to welcome in the dawn of a new era of free trade,'' Truss told reporters at a signing ceremony alongside Japanese Foreign Minister Toshimitsu Motegi in Tokyo.

The CEPA, broadly agreed to last month, comes into force on January 1. It is largely a copy of the existing EU-Japan trade arrangement, which only applies to Britain until the end of 2020. After that, at least as currently scheduled, the UK will no longer be part of the bloc's customs union and single market.

Japan currently exports goods worth about 1.5 trillion yen ($14 billion; €11.8 billion) to Britain each year, mostly cars, auto parts and other machinery. At the same time, it imports items worth nearly 1 trillion yen from Britain, mainly pharmaceuticals, medical products and cars, according to the Japanese Foreign Ministry.

Motegi said CEPA ensures continuity with the EU deal, and adds new areas of cooperation, such as e-commerce and financial services.

Britain said the new deal meant 99% of its exports to Japan would be tariff-free. CEPA also cuts tariffs on Japanese cars gradually until 2026, when they'll be eliminated altogether. That arrangement also stands in the current Japan-EU trade agreement.

The deal must still be approved by the parliaments of both countries.

Britain formally left the EU as a political institution on January 31, four years after a referendum that saw voters decide to withdraw from the now-27-nation bloc. London is still haggling with Brussels to try and reach an agreement on what their new trade relationship will look like after the Brexit transition period ends at the close of the year. During the transition period, Britain is still trading with Europe, and internationally, as if it were an EU member.

Motegi on Friday raised concerns about the impact of the UK withdrawal on Japanese businesses, saying a smooth transition was important for companies that see the UK as a "gateway to continental Europe."

"It is of paramount importance that the supply chains between the UK and EU are maintained even after the UK's withdrawal from the EU. Japan has high hopes that an agreement is reached soon," he said.

British Prime Minister Theresa May has arrived in Japan in an effort to consolidate differing Brexit interests. The UK wants to lay the groundwork for a future trade deal, but Japan has other concerns.

Many leading financial institutions are threatening to leave London following Britain's exit from the European Union. Japan's Sumitomo Mitsui will shift its focus to Frankfurt to maintain clients in EU member states.