EU and Japanese officials have reached agreement "in principle" on a free trade deal. Both the EU and Japan have stressed that the pact is a rejection of the kind of protectionism US President Donald Trump advocates. 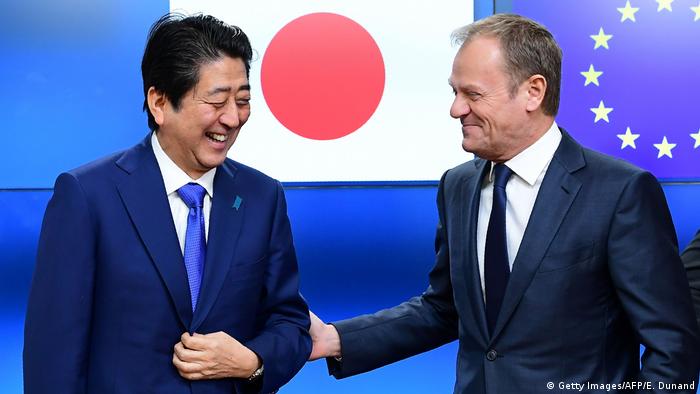 "We did it. We concluded EU-Japan political and trade talks. EU is more and more engaged globally," Tusk announced on Twitter.

"This accord is not just about trade but above all the shared values of our societies: democracy, rule of law and human rights," Tusk told reporters.

The pact, which has taken four years of negotiations, will cover a combined market of 638 million people, or about 28 percent of the world's economy. Signed on the eve of meetings with US President Donald Trump at a G20 summit in Hamburg, Germany, the deal is also highly symbolic.

"Together, we are sending a strong message to the world that we stand for open and fair trade. As far as we are concerned, there is no protection in protectionism," Juncker told reporters.

Germany's Economy Minister Brigitte Zypries echoed the EU commission chief's comments, saying the pact was an important signal against protectionism ahead of the G20 summit.

"The agreement shows that trade deals for open markets can be concluded with mutual interests. Globalisation needs rules, and trade agreements contribute to this," she said in a statement.

For Abe, the deal shows Japan remains an important partner in global trade, especially after Trump this year said he would end a trade deal with Pacific nations.

"It sends a strong message to the world," Abe said.

The 28-nation EU exports 86 billion euros in goods and services to Japan every year, but faces high tariffs and other obstacles in reaching the market. The EU imposes tariffs of 10 percent on cars and 14 percent on electronic products, while Japan has tariffs of 29.8 percent on cheese and 38.5 percent on beef.

The "agreement in principle" means that the two sides have yet to work out the final details of the deal and remain divided over certain issues, including a dispute settlement mechanism for investors.

The EU official said that initial agreements have been reached over two sticking points: tariffs on cars and farm and dairy products such as cheese.

Japan in longest economic expansion in a decade

The world's third-largest economy has grown again in the first quarter, marking a long string of gains since 2006. But analysts warned that the nation's long battle to conquer deflation was far from over. (18.05.2017)