Belarusian dissident Maria Kolesnikova has been imprisoned for over a year, after she opted to tear up her passport rather than go into coerced exile. 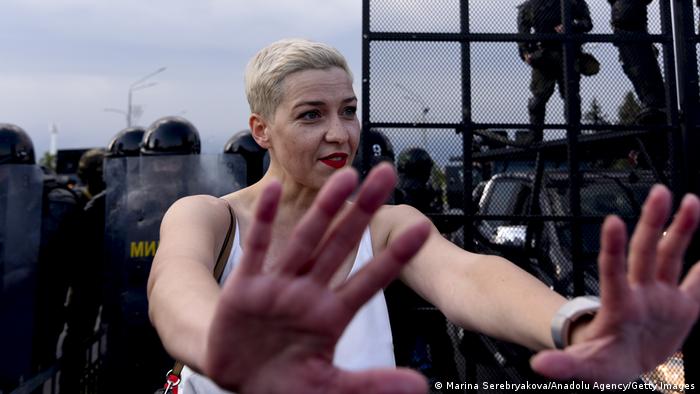 Before her arrest in September, Kolesnikova helped direct protests against Lukashenko

Maria Kolesnikova, a leader of the opposition in Belarus, was detained by masked men in September 2020 in Minsk, driven to the border with Ukraine and ordered to leave the country. But she refused and tore up her passport. Kolesnikova has been in custody ever since, charged with an attempt to seize power.

A year later, she was convicted in a closed-door trialand sentenced to 11 years in prison.

Alexander Kolesnikov has not seen Kolesnikova, his daughter, since September and has not been allowed to visit her in jail. "I live for every letter and await news from her," he told DW. "I always have her letters on me."

Kolsnikova's arrest came after weeks of protests against President Alexander Lukashenko. Despite the early arrests of prominent dissidents, the demonstrations would continue. Prosecutors have also opened proceedings against her and other members of the opposition Coordination Council for forming an "extremist grouping."

Who is Maria Kolesnikova?

Kolesnikova had been a musician, involved predominantly with cultural projects. She even lived in Germany for some time. Last year, however, she started coordinating the former banker Viktor Babariko's election campaign. After Babariko was arrested, she joined forces with Svetlana Tsikhanouskaya and Veronika Tsepkalo to lead the opposition movement to victory in the August presidential elections. Their "triumvirate" was a success and it seemed that voters had chosen Tsikhanouskaya to lead the country on August 9. When the election was called for Lukashenko, Belarusians took to the streets in protest. Members of the Coordination Council were soon arrested or driven to the borders, where they were asked — or instructed — to leave the country.

Relatives understood that Kolesnikova was taking a risk when she ran for president, but they did not try to dissuade her. "When Maria chooses to do something, nobody can change her mind. Now I know how important this decision was for her," her sister Tatiana Khomich, who was also in Babariko's campaign team, told DW.

Kolesnikov said he had prepared himself for reprisal but he couldn't help but worry about her sudden disappearance in September and subsequent detention "If your own child lands up in such a situation, if you don't know what is happening, who's behind it and what's going to be done, then it's of course very difficult," he said. "My first hope was that she would survive because in the 1990s politicians disappeared here."

The symbolic gesture of tearing up her passport had made a profound impression on the people of Belarus, he said. "Maria is a person with convictions," he added. "She has often complained about the fact that fundamental human rights are violated here. So I was not surprised by what she did. But I was amazed by the form that her protest took. That takes a lot of courage."

Kolesnikova's relatives stay in touch with her not only through letters, but also via lawyers who are allowed to see her and report on her condition. "I've made regular requests to visit her but in vain," her father explained. He added that he knew that she had written some letters which had not gotten to him. In the letters that have arrived, Kolesnikova remains optimistic, Khomich said, reading from one of them "It is an important experience to be able personally to observe all of this from the inside. Because lots of people have experienced detention and jails, I am certain that the future of our whole penitentiary system is going to change. I have no doubt that inmates will take the initiative and call for more humane and better conditions in detention."

The family has been fighting nonstop for her release since she was arrested. Support has come from all over the world and the family members ensure that all their requests and applications are accompanied by letters from European politicians so that the Belarusian authorities realize that Kolesnikova's situation is known. "I am grateful for the support of the ambassadors from many EU countries, as well as the US ambassador," said Kolesnikov. "It is very important to know that we've not been left alone in this emergency."

Khomich said the two-month extension of her sister's detention was a sign that the authorities were scared. "They are trying to isolate her for as long as possible," she said. "They don't dare put her under house arrest or release her on bail, because she is very dangerous for them."

Kolesnikova's family plans to continue the efforts. Her father is certain that her courage and dignity will help her survive. "I am very proud," he said. "She has expressed the ideas and desires of many Belarusians," he added.

This article was originally written in German and updated to reflect recent news events.