Ivan Ivanji: Prisoner of the Nazis, communist, author | Europe| News and current affairs from around the continent | DW | 07.06.2018

The Yugoslav author was a concentration camp prisoner and interpreter for President Tito. His tool for dealing with the past — writing. Ivanji told DW about a life that straddled some of Europe's most seismic events. 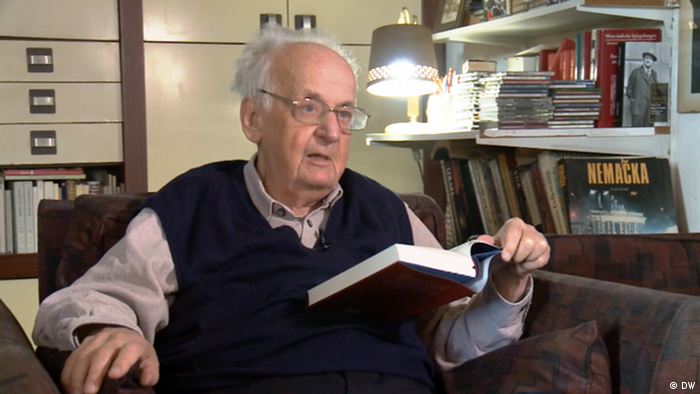 Ivan Ivanji's life takes place between stacks of books – dozens of them written or translated by him personally. Between those stacks are his desk and computer. Ivanji answers emails within minutes even at the proud age of 89.

"I'm not a particularly social person," he told DW. His third — and as he says, "final" — wife Dragana, a former ballet dancer, died three years ago. Now, he is a lone wolf. "I live out my life in books. I have invented a lot of characters. I find them easier to deal with than real people."

But Ivanji is constantly dealing with people. And he is happy to talk when people ask him about the Nazi era, his time in the Buchenwald concentration camp, about socialist Yugoslavia, literature or the state of democracy in his homeland and in Europe. Whether in lectures, interviews or texts — Ivanji seems driven.

It seems logical — if a person has lived three lives, they likely have a lot to say. He was born the son of Jewish parents and was interned at both the Auschwitz and Buchenwald concentration camps. He was a Yugoslavian diplomat and German interpreter for Communist-era President Josip Broz Tito, to whose ideas Ivanji remains faithful even today. And moreover, he is a respected author and journalist.

Born in 1929 in what was then Grossbetschkrek in the kingdom of Yugoslavia and is now Zrenjanin in the Serbian province of Vojvodina, Ivanji grew up among Serbs, Jews, Germans, Hungarians and Romanians. He says his early life was "idyllic."

His parents – both of whom were German-educated physicians — were not practicing Jews. An Austrian governess was tasked with teaching their son German, free of the heavy Danube-Swabian accent so prevalent in the region. Thus he learned a third mother tongue — or as he jokes a governess's tongue — alongside Serbian and Hungarian.

He was 12 years old when the Germans marched into Yugoslavia in 1941. In 1944 he was deported. "I am fit for work!" he told the SS doctor upon arrival in Auschwitz. Those words, which would eventually save his life, were based on a false assumption on his part: The 15-year-old thought workers were given better food. He did not believe that Jews were actually being exterminated. It was not until after the war that he learned his parents had both been killed in Belgrade.

After a short stint at Auschwitz, he was taken to Buchenwald, where he toiled as a forced laborer. Still, he survived. "I was really given a life sentence at Buchenwald, because I go there every year, sometimes twice a year. The longer I live and the more fellow concentration camp prisoners die, the more often I go," says Ivanji.

When he visits, he insists on being put up in Hotel Elephant in the nearby city of Weimar. That is where Hitler stationed himself when in the area. The hotel even installed a special balcony so that the "Führer" could speak to his people. Ivanji jokes that another reason he likes to stay there is that the beds are more comfortable than in the concentration camp's barracks.

Right now, Ivan Ivanji is back in Germany. He came to Bonn at the invitation of Deutsche Welle and the German historical museum, Haus der Geschichte. For Ivanji, the trip is a chance to revisit another part of his life. Decades ago, when Bonn was still the capital of then West Germany, he lived here; working as a cultural attaché at the Yugoslavian Embassy.

After the war, he studied and began work as a journalist. Around that time, his governess's tongue also opened doors to the most powerful communists in Yugoslavia. He soon began working as an interpreter for head of state Tito – who had become a political heavyweight on the international stage when he founded the Non-Aligned Movement (NAM) in 1961.

"That was really where I was at home, especially in terms of ideology. And my home is still to be found there – between Triglav, the highest peak in Slovenia, and Lake Ohrid in Macedonia," says Ivanji, some 27 years after the fall of Yugoslavia. He quietly protests the bloody collapse of his former homeland by living in Vienna, preferring to travel on an Austrian rather than a Serbian passport.

The things Ivanji has seen and experienced hover in a space between fact and fiction in all of his books. He has written autobiographically about his life as a concentration camp prisoner in Mein schönes Leben in der Hölle (My Beautiful Life in Hell) and used the words "Jedem das Seine" ("To Each His Own"), which are forged into the entrance gate at Buchenwald, as the basis for the novel Buchstaben von Feuer (Letters of Fire). His governess plays the main role in Das Kinderfräulein (The Governess) and he also published another autobiographical work describing the historical events that he experienced alongside Tito in Titos Dolmetscher (Tito's Interpreter). Beyond that, he has penned some 150 further novels, essays, plays and radio dramas. He says he has "a writing obsession — it's good for me."

In the 1980s, Ivanji was the secretary general of the Yugoslav Writers' Union. He also shared a friendship with the German Nobel laureate Günter Grass. Only twice did that friendship teeter: Once, when Ivanji refused to continue translating Grass's novels into Serbo-Croatian — too complicated — and a second time when Grass came out in support of NATO's 1999 bombing of Serbia.

In 2016, the Belgrade weekly magazine Vreme named Ivanji its "Person of the Year," praising the author's ability to make clear that, "even after experiences as bitter as the grounds left at the bottom of a cup of coffee, he celebrates life and shows that history has not yet destroyed mankind. And that is a valuable message."

The past and the future

Ivan Ivanji is not someone to hold his tongue. For instance, he has voiced harsh criticism of the Israeli government — he knows that as a Jew and a concentration camp survivor he can. His friend Grass would have created a scandal if he had done the same.

The author has also compared the death of refugees in the Mediterranean with the mass murder carried out at Auschwitz. Can one make such a comparison? "One can and one must!" answers Ivanji: "The child that trustingly holds its mother's hand as she is forced to lead him into the gas chamber and the child that drowns clinging to his mother in the Mediterranean while you and I sit here – both situations are awful, but the second is more so."

Ivanji's overall concern for the future of Europe goes hand-in-hand with his criticism of European refugee policy. He warns that Europe must unify and defend itself economically against the US and China. The old communist says: "As far as I’m concerned, this can be done on a Christian basis" — religion can be overcome later.

Two decades on, thousands of refugees from the Yugoslav wars still don’t have a home to call their own. A regional housing program is hoping to change that - with some help from the West. (09.07.2017)