Italy′s Salvini: Merkel has underestimated the challenges of migration | Europe | News and current affairs from around the continent | DW | 03.09.2018

Italy's Salvini: Merkel has underestimated the challenges of migration

Italian Interior Minister Matteo Salvini says the German government has been underestimating the risk of social conflict over migration for years. DW spoke with him as his government marks 100 days in office. 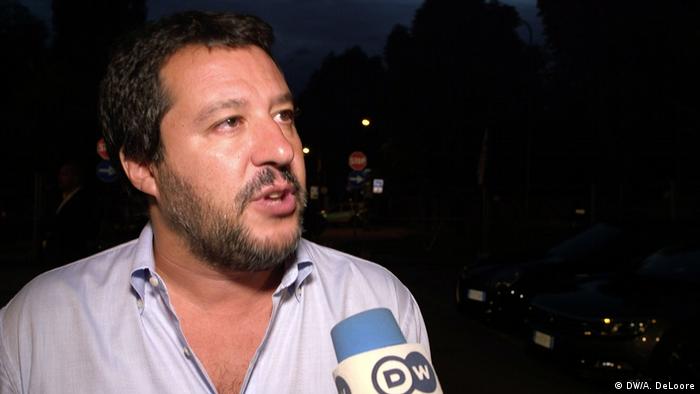 Italian politician Matteo Salvini is the head of the country's far-right League party, which formed a populist coalition alongside the anti-establishment Five Star Movement in June. In addition to his post as interior minister, Salvini serves as deputy prime minister to Giuseppe Conte, a newcomer to politics chosen by both parties as their head of government.

DW: After 100 days as part of a new government, do you feel like you have addressed Italy's most pressing issues, such as poverty and unemployment?

Matteo Salvini: I am very happy with the 100 days. Under my remit, which is security, immigration, and public security, we have achieved extraordinary results. Regarding employment, taxes and pensions, in the autumn the new government will make its mark, with a new path, change, growth, so I'm not worried about data for this period. We are already working on growth, which should finally rebound.

International markets seem skeptical though. The famous "spread," that is the risk premium for Italian bonds, has doubled since you came to power. How do you explain that?

There are people who are speculating. There are also people who are against us. Our government is free and independent from the multinationals, from big finance, from banking powers — both international and European. We have no fears. The Italian economy is sound. Italian business is sound. So the economic reforms will provide all the answers that the so-called markets and the lords of the "spread" are waiting for.

It seems like Italy's new prime minister, Giuseppe Conte, is not very present. You are more present than he is. Do you feel like you are the real head of the government?

No, we have two different personalities. He is a man of mediation and listening. He visited Donald Trump. He will go to China. He attends the European summits. I am deputy prime minister, along with Luigi di Maio [of the 5-Star party] . We are party leaders. So it's clear that due to our characters and our roles we tend to be more present, but we are a good team.

Let's turn to the European Union and the topic of migration. You seem at odds with the EU on some points. Do you feel like the goal going forward is to find a compromise with the EU or are you on confrontation course?

Even though I am often described as a hooligan, I am always trying to reason, to discuss, to ask questions. Take the revision of the Treaty of Dublin and Operation Sophia for instance. We are making proposals, we are waiting, we are suggesting. It is clear that I had to stop the migrant landings. Last year in the period up to August, 100,000 migrants arrived and the European Union did little or nothing. This year we had fewer than 20,000 landings, and the European Union is still doing little or nothing. So I am still willing to debate, but more recently, we've also been talking with some non-European Union countries, such as Albania, Serbia and Montenegro. 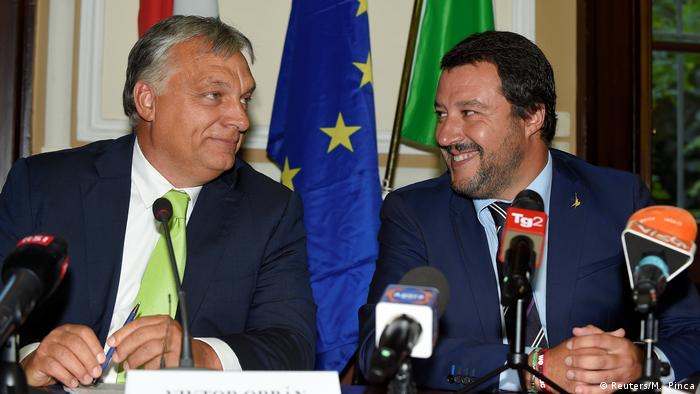 On the issue of migration, you recently agreed to form an alliance with Hungarian Prime Minister Victor Orban. And yet you've stated that you want to see redistribution of migrants across the EU. Orban doesn't want that — but German Chancellor Angela Merkel does. So aren't you closer to Merkel than Orban on this?

I'm trying to get something good out of everybody. Victor Orban talks about defending Europe's borders, about protection in the countries of origin and investment in Africa, and I agree with him. Angela Merkel is proposing a redistribution inside Europe, and I can agree even with this position in the very near future. What we have to do is help these people so that they don't flee their countries. We should be rapidly investing €500 million ($580 million)
in Africa. I believe that both Germany and Hungary are right regarding certain issues.

You've seen what's been happening in Chemnitz, Germany at the moment, with the extreme right, and with the Alternative for Germany (AfD) party. Some are blaming Angela Merkel, saying that this is the result of the migration crisis. Do you agree?

I would say that Angela Merkel certainly underestimated the risk of a social clash when she claimed that there was space for hundreds of thousands of people in Germany. I still remember what happened during the New Year's Eve celebrations in Cologne in 2015, and also elsewhere. However, violence is never a solution! Violence calls for violence, but the German government has been underestimating the problem for years, and the rise of the AfD is clearly a reaction.

Your government has been in office for 100 days now. Do you think it will hold another year?

Yes, I think that this government will have a long life if it respects its obligations to the Italian people.

Is it harder than you thought it would be?

(Laughing) I'm happy that I can finally participate in what is happening.

Is it harder than you thought it would be, yes or no?

Well, it is not easy. Italy is a big country. We have important challenges to face, but I was tired of being in the opposition.

Interior Minister Matteo Salvini is reportedly being probed for his role in preventing migrants rescued at sea from disembarking in Sicily. Meanwhile, a deal has been reached to allow the migrants to leave the ship. (25.08.2018)