Just weeks before Italy gives up its rotating presidency of the EU, the country's Constitutional Court is to rule on whether to overturn a law which ensures legal immunity for Prime Minister Silvio Berlusconi. 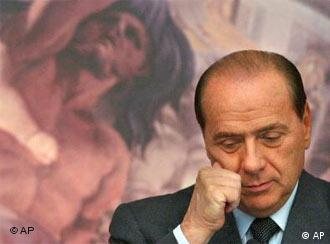 Earlier this year, the Italian parliament approved legislation that made the prime minister immune from prosecution for as long as he remained in office. If the court now rules that the law is unconstitutional, Berlusconi could have a rocky time ahead of him until the general elections scheduled for 2006.

The court's decision in June immediately slammed the brakes on a corruption trial against Berlusconi in Milan, in which the prime minister faced accusations of trying to bribe judges in an attempt to further his business interests. The politically charged trial revolved around the privatization in the 1980s of state-owned food company SME, which Berlusconi's business rival Carlo de Benedetti was attempting to acquire.

Under the legislation, Italy's five senior public office holders -- including the prime minister, the president, the speakers of both houses of parliament and the chief justice -- were able to claim immunity from prosecution.

It was a highly inflammatory move. The last few months have seen an anti-corruption campaign gather momentum that aims to force a referendum on the controversial immunity law.

Activist and magistrate Antonio Di Pietro collected almost one million signatures for a petition submitted to the Supreme Court. However, if the court decides the law is unconstitutional, this would no longer be necessary.

It's just one more challenge to Silvio Berlusconi's beleagured leadership. Amid inflation and rising unemployment, his center-right coalition came under fire at the weekend as hundreds of thousands of demonstrators took to Rome's streets in union-backed protests at the government's proposed pension reforms, which foresee Italian citizens retiring only once they've made 45 years of contributions, or reached a minimum age of 65 for men and 60 for women.

Berlusconi and his allies say the prime minister is the victim of a "witchhunt" initiated by left-wingers. But the tycoon who presides over an empire based on broadcasting, publishing, banking and even soccer has long been accused of tailoring legislation to suit his interests.

A media bill approved in early December allows Berlusconi to tighten his hold even further on Italy's media by reversing a court decision which would have forced the Mediaset company to sell off one of its three television stations by the end of 2003. The bill also lifts the ban on cross-ownership of broadcast and print media in 2009 and increases the amount of advertising that one single company can have. All these measures are likely to increase the profitability of Mr Berlusconi's companies.

A conflict of interest

Critics say the legislation is a blow to Italy's media freedom and plurality, and point out that Berlusconi has influence over some 90 percent of Italian media, which they argue leads inevitably to a conflict of interest.

If the court ruling deems the immunity law is not legal, Berlusconi may well be sent back to court to answer to corruption charges. Surveys show that for the first time since becoming prime minister in 2001, the businessman-turned-politician's popularity is on the wane.

Even if the court rules in his favor, the Italian Prime Minister, who's been a staunch ally of U.S. President George Bush in recent months, may soon find his power curtailed when the voters next go to the polls.

The court’s decision is not expected to come before Christmas.

Thousands of Italians took to the streets of Rome on Saturday in a massive demonstration of force against government plans to drastically shake-up the state’s pension system. (Dec. 6, 2003)

Does Berlusconi Mix State Power with his own Interests?

The trial of Italy's prime minister comes under the scope of Europe's editorial pages -- and most conclude that he'll get off scott free -- even if, as some papers allude, he deserves to be convicted. (May 6, 2003)

The Houdini of Italian Politics Does it Again

Brought before a Milan court on corruption charges, Italian Prime Minister Silvio Berlusconi managed to postpone his involvement in the case just a day before proceedings are due to be frozen by parliament. (June 17, 2003)