Italy's trade unions called for the demonstration against economic stagnation and social injustice. Italy has one of the highest unemployment rates in Europe despite being home to some of its most productive regions. 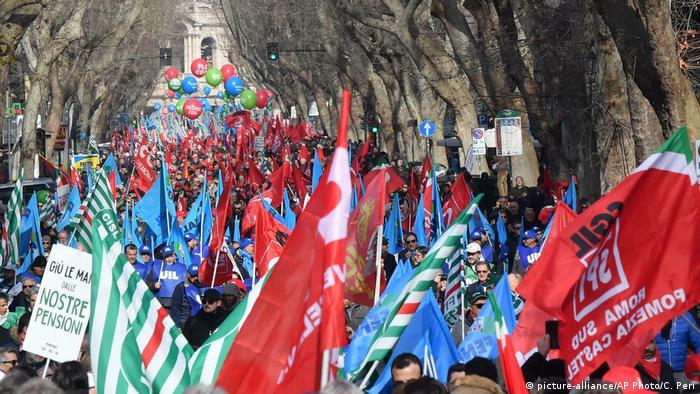 Hundreds of thousands of Italians marched through the streets of Rome on Saturday to protest the populist government's economic policies. Under the banner "A Future for Work," Italy's largest trade unions hoped to bring attention to the country's long-stagnating economy and lack of full-time employment opportunities, especially for young people.

"There are structural knots in Italy that this government is not dealing with, unfortunately, like previous governments," said Maurizio Landini, head of the Italian General Confederation of Labor (CGIL), warning that this was "only the beginning."

Unemployment in Italy is 9.7 percent, making it the third-highest in the EU after Greece and Spain. Youth unemployment is even worse. In 2017, 16.7 percent of young people were without work, double the EU average. Precarious work and underemployment are rampant.

Successive Italian governments have done little to fix the situation, which has become increasingly dire since the 2008 financial crisis, despite Italy's north being home to some of the most productive regions in Europe.

The organizers of the protest believe that the government's plans to introduce minor pension reforms and to give poor Italians a small basic income are insufficient and misguided.

'We are the change'

Since June, Italy has been ruled by two disparate populist parties. One is the League (Lega) party, which has roots in Northern Italian separatism and represents the far-right political spectrum. The other, the Five-Star Movement (M5S), is ostensibly leftist and anti-establishment but has also engaged in hard-line nationalist and anti-immigrant policymaking.

"If someone governs this country and yet goes as a friend to protesters in another, to them we say if you have a shred of intelligence listen to us in this square: we are the change," he said.

Di Maio brushed off the criticism. "It was previous governments who sacrificed everything on the altar of austerity: savings, jobs and businesses," Di Maio was quoted by Italian daily Corriere Della Sera as saying.

The deputy premier then flung the critique back at Landini and the CGIL, alluding to corruption allegations against Italy's labor organizations: "I hope Landini supports my proposal to cut the golden pensions of the former trade unionists."

The labor union head also slammed the government for failing to tackle corruption, climate change, and social justice issues like sexism and racism. The government does not appear to see these, particularly the latter, as matters of importance. Italy's other deputy prime minister, Matteo Salvini (League), openly mocked an initiative to counter the widespread racism in Italian football and fan culture.

More than 500 migrants have been forcibly removed from Italy's second-largest refugee center. Italy's populist government claims it is "helping Italians," but the town complains that years of hard work are being ruined. (24.01.2019)

Watching Italy's populist leaders behave like bulls in a china shop is hard to bear. Their escalating dispute with France is toxic for the EU and we shouldn't let them get away with it, says DW's Bernd Riegert. (09.02.2019)