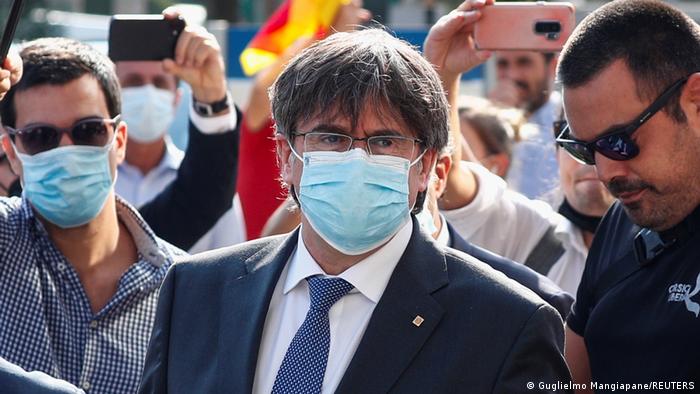 Catalonia's former separatist leader Carles Puigdemont walked out of an Italian court Monday after a judge delayed a decision on Spain's extradition request and said he was free to travel.

After the ruling, Puigdemont shook hands and embraced supporters waiting outside, saying he was "very happy," as he got in a van and was driven away.

Earlier, to chants of "Freedom! Freedom!" from a few dozen supporters who waved Catalan and Sardinian flags, Puigdemont arrived in court in Sassari. The 58-year-old vowed to fight the extradition request from Spain.

Puigdemont is wanted on charges of sedition over his role in the failed effort for Catalan independence in October of 2017. He was released following his arrest in Sardinia.

Puigdemont had enjoyed immunity from prosecution as a member of the European Parliament, but he was stripped of that immunity this March. He and his co-conspirators who fled abroad have appealed that decision but there is no ruling yet from the European Court of Justice (ECJ).

Puigdemont's lawyer told reporters that the court will rule on extradition to Spain after the ECJ announces its verdict on the Catalan leader's immunity. But he said his client is free to travel as he pleases in the meantime.

"He is absolutely free. The court will set a new date after the European court decides on the two pending questions. One is the immunity of President Puigdemont, and the other is the legitimacy of the Spanish judge to issue the arrest warrant," the lawyer, Agostinoangelo Marras, told The Associated Press news agency.

Puigdemont fled Spain for Belgium in 2017 after leading efforts by Catalan separatists in the regional government to stage a referendum vote for independence, which Madrid viewed as seditious and unconstitutional.

His latest arrest occurred on September 23 on the island of Sardinia where he had flown to attend a Catalan folklore festival.

He was previously arrested when he arrived in Brussels after exiting Spain in the wake of the street and police violence surrounding Catalonia's ill-fated independence bid in 2017.

All his arrests are on a European warrant put forth by Spain.

What happened after the Catalan independence vote?

Separatists in the regional government of the northeastern Spain region of Catalonia issued a declaration of independence weeks after the violence-tainted referendum. This triggered a constitutional crisis.

Puigdemont and others fled abroad, hoping to protect their freedoms. Those that stayed behind in Spain were arrested.

Nine were jailed and received sentences ranging from nine to thirteen years, though the Sanchez government pardoned them earlier this year in a goodwill gesture to restart negotiations with the regional government and soften what has been the country's biggest political crisis in years.

The Spanish government still wants Puigdemont and his co-conspirators to face justice for their role in the referendum and decisions to become fugitives from the law.

Toni Comin and Clara Ponsati, former Catalan regional ministers, are also wanted by Spain. They appeared in court in Sassari Monday to show support for their comrade.