Catalans march for independence ahead of Madrid talks 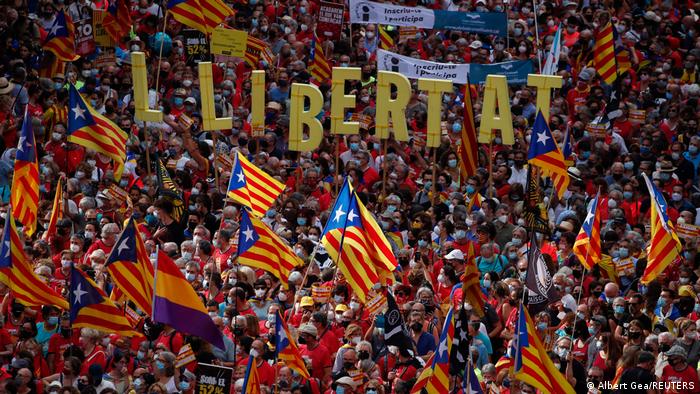 Catalans tried to offer a display of unity despite

More than a hundred thousand separatists on Saturday marched through the streets of Barcelona to call for Catalan independence.

The protests came just days before the Spanish central government was due to meet the region's leaders in a bid to ease tensions between the two sides.

What is the mood in Catalonia now?

The 108,000 protesters police recorded at Saturday's "Dialda" Catalan national holiday rally — commemorating the 1714 fall of Barcelona in the War of the Spanish Succession —  are a far cry from the millions who marched for independence in past years.

While many have not given up hopes of independence, there is a prevailing feeling that it is an impossible feat. 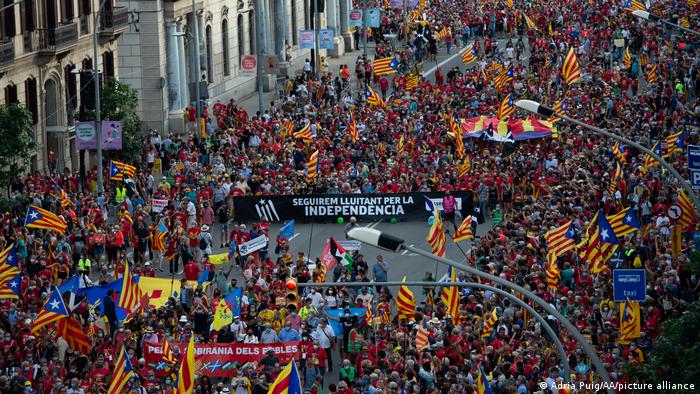 Many factions within the movement do not want to talk with Spanish Prime Minister Pedro Sanchez, even after he released several organizers of the 2017 independence push.

"We are deeply skeptical of the attitude of the Spanish government and the outcome of this negotiation," Jordi Sanchez, general secretary of Together for Catalonia, said.

The cynicism is shared by the National Catalan Assembly, which sees the talks as an attempt to defuse the situation. The group organized Saturday's march with slogans like, "Fight and we will win independence."

Can the tension be overcome?

Pere Aragones, the Catalan regional president, and his Republican Catalan Left party believe the talks offer a real opportunity to advance the debate.

"Catalonia is on the brink of doing something that it has never achieved before: opening a negotiation with the Spanish state, government to government, to tackle how we resolve this conflict," Aragones said.

"We do so with the commitment from both sides that the result of this negotiation will be put to the Catalan citizenry for a vote," he added.

The Spanish prime minister, whose left-wing government wants to hold out an olive branch out to Catalans that were once some of the biggest supporters of his Spanish Socialist Workers' Party (PSOE), hopes talks will help heal the wounds created by previous tensions.

"Let the spirit of reunion, mutual affection and concord be our guides on this (Catalan holiday)," Sanchez tweeted in Catalan. "We are advancing toward that which unites us."

The last time the topic topped Spain's political affairs was when separatists staged an independence referendum in October 2017 — which was declared illegal.

In an attempt to improve relations, Madrid recently issued an amnesty for Catalan independence leaders who were jailed after the referendum.