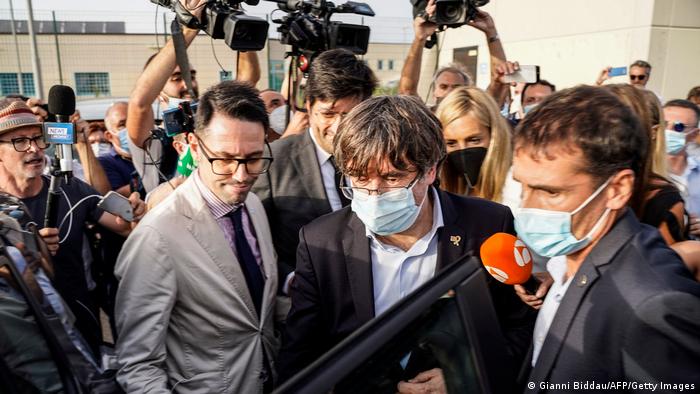 Catalan separatist leader Carles Puigdemont pledged on Saturday to return to Sardinia in early October to attend a court hearing on his possible extradition to Spain.

A court on the Italian island released Puigdemont on Friday, a day after Italian police detained him under the European arrest warrant issued by Spain.

Spain wants Italy to extradite Puigdemont over a 2017 independence vote that courts ruled as illegal.

"We will continue fighting. We will never give up and I will continue traveling around Europe," Puigdemont told a news conference in Alghero, a town on the island.

"I'll be back to Brussels on Monday," he said. The separatist leader fled into self-imposed exile in Belgium following the 2017 bid for independence.

He was visiting Sardinia this week to attend a Catalan cultural event.

Puigdemont praised Italy for the quick handling of his case, with him held in detention for less than 24 hours: "I am happy with the final result. Because our political and legal arguments have been proven," he said. "The Italian justice took only a few hours to make this decision."

The Italian judge ruled that Puigdemont was neither a flight nor security risk when granting his release pending trial.

"I'll be back on October 4 for the hearing and, if the Italian justice will decide for my freedom, I'll go back home in Belgium," he said.

Who is Carles Puigdemont?

The 58-year-old headed the Catalan government and was one of a number of separatist lawmakers who organized the October 2017 Catalan independence referendum. More than 90% of those who voted supported independence, though turnout was well under 50%, with opponents of Catalan independence urging their supporters to ignore the unsanctioned poll.

Several weeks after the referendum, the separatists issued a short-lived declaration of independence.

This triggered a huge political crisis with Spain during which Puigdemont and several others fled abroad.

Madrid prosecuted the Catalan separatist leaders that stayed behind, handing nine of them long jail terms, on charges including sedition and misusing public funds to conduct the vote.

Although they were all pardoned earlier this year, Madrid still wants Puigdemont and several others to face trial over the secession bid.

The Italian government has said it has no influence on the proceedings against Puigdemont and that it is a matter for the courts.