The Italian coast guard has said it coordinated the rescue of some 800 migrants from the Mediterranean Sea. Seven children with water in the lungs were transferred to a hospital in Tunisia. 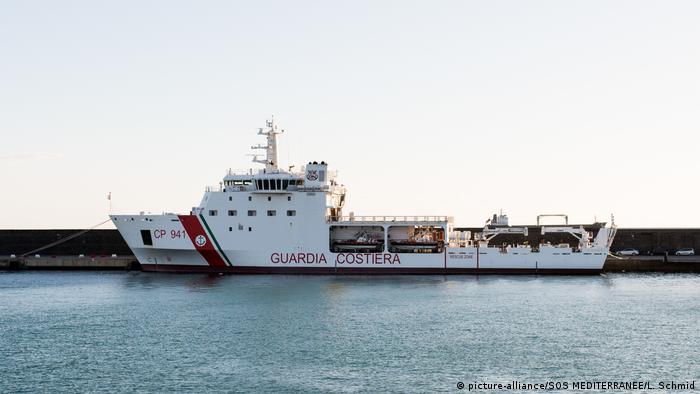 Some 800 migrants spotted in five boats were rescued from the Mediterranean Sea on Saturday, the Italian coast guard said in a statement.

Two bodies were recovered during the operation in waters between Italy and Libya, the statement added.

Seven children who had water in their lungs were taken by helicopter to the nearest hospital that could treat them, located in Sfax, Tunisia.

The migrants were picked up from two barges, two rubber dinghies and one small boat in five separate rescue operations.

The Mediterranean remains the world's most dangerous migration route. Hundreds of thousands of migrants and refugees from sub-Saharan Africa and the Middle East have been rescued at sea in recent years and taken to ports in southern Italy, Spain and Greece.

Migrants remain vulnerable to human traffickers who charge them thousands of euros to board often overcrowded, unseaworthy boats that set off from Libya and other countries for Europe.

According to the International Organization for Migration (IOM), 3,116 migrants died or went missing in Mediterranean waters last year. The provisional count for 2018 is 206.

The migration issue remains a political hot potato in several EU countries, especially Italy, where a national election will be held on March 4.

After years of migrant arrivals, the ruling Democratic Party has pointed to a sharp fall in newcomers from Libya since July as proof that it is now managing the crisis.

The decline follows a deal with the Tripoli government sealed last February, which foresaw aid and training for the Libyans to fight people smuggling and to bolster their coast guard.

Migration policy is also a key point in German talks to form a new government, with members of the Social Democrats opposed to limits some in Chancellor Angela Merkel's bloc of conservative Christian parties would like to impose.

Eight migrants have died, scores rescued and dozens are missing after their rubber dinghy ran into trouble off the Libyan coast. One rescue charity said those picked up had been in the sea for several hours. (06.01.2018)