Eight migrants have died, scores rescued and dozens are missing after their rubber dinghy ran into trouble off the Libyan coast. One rescue charity said those picked up had been in the sea for several hours. 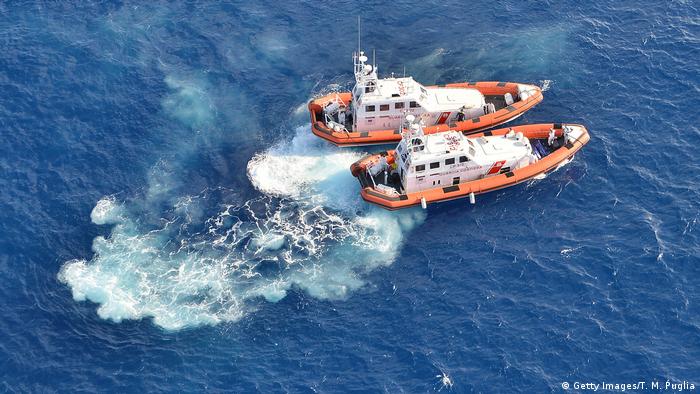 Italy's coastguard said on Saturday it had retrieved the bodies of eight migrants and rescued a further 84 from a smugglers' dinghy which capsized in the Mediterranean.

The partly-submerged vessel was spotted early in the day by a surveillance aircraft around 64 kilometers (40 miles) off Libya's coast. The pilot then alerted the Italian navy and coastguard vessels to launch a rescue operation.

The coastguard said dozens of other people who were on board are missing.

German rescue charity "Sea-watch" said on Twitter that at least 25 people died in the incident, but acknowledged that exact numbers were still unclear.

The coastguard told the charity that some 150 people had been aboard.

The Spanish rescue group known as "Proactiva Open Arms" said in a tweet that "dozens of other passengers will never be found. It described how many migrants were in the water for hours before being saved.

Read more:The EU migrant relocation and resettlement scheme - what you need to know

The deaths marked the first known deadly incident involving migrants in 2018, although rescue groups said countless dinghies likely sink without a trace each year making the perilous crossing from Africa to Europe.

More than 400 people have been brought to safety in Italy during the first days of 2018, the interior ministry said.

Last year, 3,116 people died trying to cross the Mediterranean, according to the UN's International Organization for Migration, down about 40 percent on the previous year. Among those who died, 2,832 were headed for Italy, 223 were headed for Spain and 61 were trying to reach Greece.

The large drop has been attributed to a controversial deal last year between Italy and the internationally recognized Libyan government in Tripoli, which saw the investment in new boats, equipment and training for the Libyan coastguard.

As well as intercepting more migrant boats, Italy — with the backing of the European Union — has sought the assistance of powerful militias in tackling people smuggling gangs.

Increasingly, migrants are being detained in camps within Libya, to the anger of rights groups who say they are forced to live in appalling conditions and are sometimes sold into slavery.

A subsequent deal means the first migrants evacuated from Libyan detention camps have arrived in Europe by air.

Evacuations of migrants stranded and abused in Libya are to begin within "days," says French President Emmanuel Macron. He says Tripoli, African and EU leaders have agreed on an emergency plan at their summit in Abidjan. (30.11.2017)