Italy's president says the country will need to hold a fresh vote if bickering political parties cannot work together. Negotiations to form a government have been deadlocked since an inconclusive election in March. 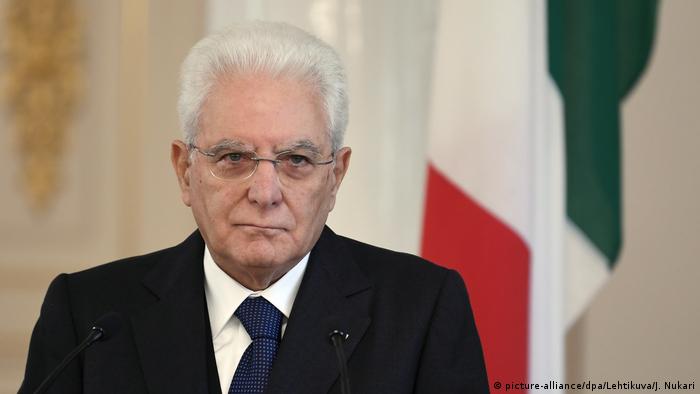 Italian President Sergio Mattarella issued a stern warning on Monday amid failing government-building talks and proposed that a "neutral" administration be formed to lead the country until December.

Mattarella called on the bickering parties to show "responsibility" and support his currently unnamed government, adding that a new vote would have to be held if such an administration failed to find the necessary backing in parliament.

How the political crisis began

'No faith' in president's proposal

"Let the parties decide of their own free will if they should give full powers to a government ... or else new elections [should be held] immediately in the month of July or the autumn," Mattarella said in a televised statement.

In a tweet, the leader of the 5-Star Movement, Luigi Di Maio said: "[We have] No faith in a "neutral" government, which is synonymous with a government of technocrats. We are going to vote in July."

Forza Italia, the party led by former prime minister Silvio Berlusconi, cautioned against rushing towards an early election: "We are not afraid of an election, but a summer [vote] does not help turnout. Autumn is better."

Acting leader of the centre-left Democratic Party (PD) Maurizio Martina praised Mattarella's plan: "We hope that it's heard by all political forces. The PD will not fall short in its support for his initiative."

What would the neutral government do? The president said the neutral government would be given the task of drawing up a 2019 budget to stave off the threat of an automatic increase in sales taxes that would be triggered if the country's deficit floundered. He said the administration would also help Italy stick to its international obligations, including participating in a June European Council meeting. The government would then dissolve at the end of the year ahead of elections planned for early 2019.

Half of Italian voters backed populist parties Sunday and it's not the first EU member state to head in this direction. The results show a clear shift in the political landscape, says Bernd Riegert. (06.03.2018)

The Five Star Movement has signaled for the first time that it would prefer the Democratic Party over La Lega in a possible governing coalition. Italy has been without a government since its election last month. (07.04.2018)

The 5-Star Movement triumphed in Italy's election and intends to carry through on the promise of a basic income. Party officials insist that they can make it a reality sooner or later, Michele Bertelli reports. (10.04.2018)