Half of Italian voters backed populist parties Sunday and it's not the first EU member state to head in this direction. The results show a clear shift in the political landscape, says Bernd Riegert. 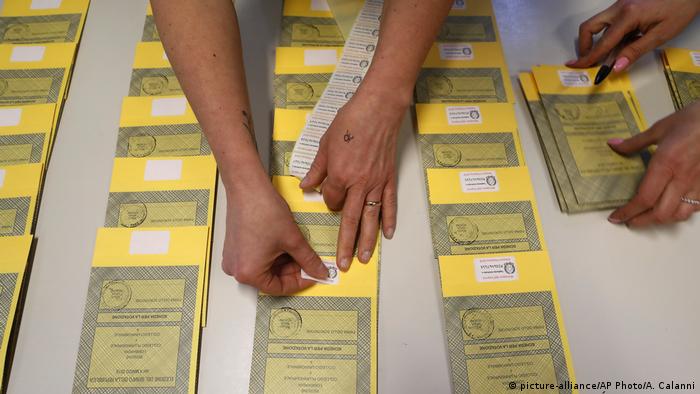 The populist earthquake in Italy represents a deep political fissure, both for the country itself and for Europe. The old system – in which the Social Democrats and Berlusconi's conservative parties simply took alternating turns heading the government – has been destroyed. Now, new parties, be they right or left-leaning, are taking their place as Italy's mainstream parties. That is a fact whether the establishment likes it or not. What is happening in Italy is the same thing we have seen – and may yet see – happen in other EU countries.

In Greece, left and right-wing radicals make up a ruling coalition. In Hungary, conservative populists rule. In France, a freshly minted anti-establishment party won the presidency in its first election, holding the right-wing populists – which a third of French voters tend to support – in check. That having been said, Emmanuel Macron's party is pro-European in contrast to many other populist movements. Right-wing populists have also become part of the government in Austria. In Germany, they are now the biggest opposition party in parliament. In fact, the right-wing Alternative for Germany (AfD) is the most popular party in some parts of eastern Germany. And in the United Kingdom, a nationalist anti-European sentiment disrupted the country's established parties and led to Brexit.

Thus, Italy is by no means an isolated case, rather it is the continuation of a trend that established parties in the EU have so far been unable to effectively combat. The simple accusation that these new challengers are "populists" from the extreme right or left simply doesn't work anymore. Voters could apparently care less. They want something new, something fresh, an alternative – that was made crystal clear in Italy.

This desire to overthrow the old system is fueled by a deep dissatisfaction with its accomplishments. And in Italy, that dissatisfaction has been percolating for a very long time, resulting in a populist eruption that has set free anti-European, anti-establishment and nationalist forces. Right-wing election victor Matteo Salvini summed things up perfectly the day after the election. He said that it was an honor to labeled a populist because he was there for the people, that he wanted to hear the "vox populi" – the voice of the people.

Across Europe, ever fewer voters seem bothered by the negative characteristics, false promises and platitudes that the establishment attributes to populists. Voters want simple answers to complex problems. If they're not delivered, then it's someone else's fault. Modern-day populists from the UK to Italy have learned a lot from the populist-in-chief, US President Donald Trump. It is no coincidence that former Trump whisperer and destroyer of systems Steve Bannon was in Rome to support far-right candidate Salvini one day before the election.

But populism in Europe is not solely a right-wing phenomenon. Members of Italy's successful Five Star Movement hold seats alongside nationalist Brexit champions from the UK Independence Party (UKIP) in the European Parliament. Greece's radical leftist party, Syriza, is seated in the Left block in Brussels. Silvio Berlusconi – who reinvented himself as a right-wing populist for Italy's election – and his mutable Forza Italia party are at home in the Christian Democratic bloc – right next to parties like Germany's ruling CDU and CSU.

Most populism is anti-European

The biggest concern for those who support European unity and peaceful coexistence among neighbors must no doubt be the fact that populist and anti-establishment parties tend to be almost exclusively anti-EU, anti-European and nationalist in their worldview. Salvini's "Italy first!" rallying cry was taken from Trump. The far-right Freedom Party (FPÖ), which is part of the ruling government in Vienna, also chants "Austria first!" If everyone starts yelling "Me first!" the concept of European unity will feel like an empty phrase. League party boss Salvini demanded Italy be "liberated" from the EU. That echoes the nonsense spouted about Brussels' supposed repression of the UK during the Brexit campaign. The only problem is, more and more voters believe such nonsense.

The new parties, the anti-establishment movements, the populists have all opened new channels of communication via the internet and social media. These have been successful and also economical. Mainstream parties throughout much of Europe seem to have missed that trend. Networks, information silos, opinion bubbles, ignorance and populist success all go hand in hand. Soon, parliamentary democracies could devolve into online opinion dictatorships. Controlled by Twitter?  By American companies? Russian troll farms? North Korean hackers?

Italy has been changed forever. Which country will be next? The Social Democratic Party (SPD) is no longer a people's party in Germany. When will the Christian Social and Democratic Union (CDU/CSU) share that same fate? Or can established parties – which are centrist at their core – stave off, perhaps even reverse the wave of populism?

The anti-establishment Five Star Movement has won the most seats outright in Italy's national elections. DW looks at its 31-year-old leader. (24.09.2017)

Iran heavy-hitters Raisi, Larijani to run for presidency 7h ago