The French president said the European Union cannot afford to go back to days of nationalism. He called for an EU-wide strategy to stem the rise of populists. 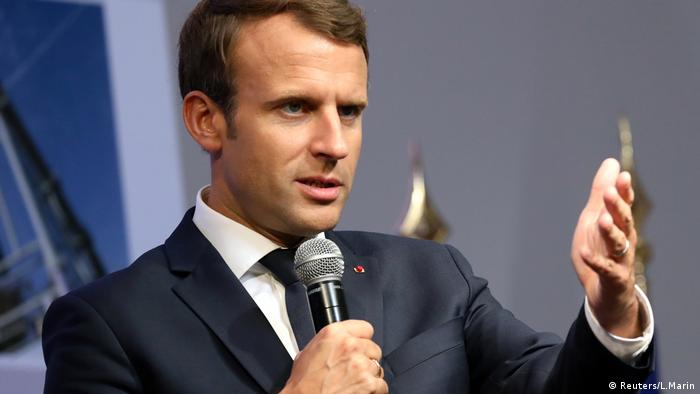 French President Emmanuel Macron said on Thursday that growing divisions among member states and the absence of a "joint project" posed the biggest risk to the European project.

During an interview with German public broadcaster ZDF, Macron said "a return to national interests" was the "worst option" for the continent.

"The populists are on the rise and they are being strengthened by our inability to help the middle class succeed," he said.

Macron stressed that Europe needed work together to offer "perspective and progress" to each individual.

The ZDF interview comes just days after the French president set out his vision for the EU, saying all the member countries must forge a common path.

His agenda included plans to give the 19-member eurozone a finance minister, budget and a parliament independent of the 28-country EU's existing 750-seat transnational legislature.

His proposals for the future of the EU met with a generally positive but also non-committal response of EU leaders.

Macron on Thursday stressed on the need to push economic growth in the region as a means to counter growing social and economic inequality.

"I believe all divisions in Europe stem from an inability to deal with the future," he said. "We doubt ourselves and curl up into a ball."

He added that the past 12 years in Europe have been characterized by self-doubt and what he said could almost be called a "European civil war." Macron said the EU member have rather chosen to work for national interests.

"We lack mutual solidarity and sometimes the necessary responsibility – some have not reformed, the others did not show solidarity," he said.

The current election result is a turning point for Germany. The far-right populist AfD has entered parliament for the first time, and Chancellor Angela Merkel has taken a hit, says DW Editor-in-Chief Ines Pohl. (24.09.2017)

Germany's European neighbors are not overly concerned by the aftermath of the election in Berlin. They expect Angela Merkel to remain the "dealmaker" in Europe. Trust in her appears as strong as ever, says Barbara Wesel. (29.09.2017)

French President Emmanuel Macron is impatient to reinvigorate the eurozone. But this poses a dilemma for the EU's eastern members: Stay out and risk losing clout in Brussels or join and risk losing economic sovereignty. (28.09.2017)

US police uncover 'possible plot' to breach Capitol 54m ago