On Monday, Italy's parties will once again try to form a coalition government. The outcome is unclear, but a stable interim government could serve the country better than if populists take over, says Bernd Riegert. 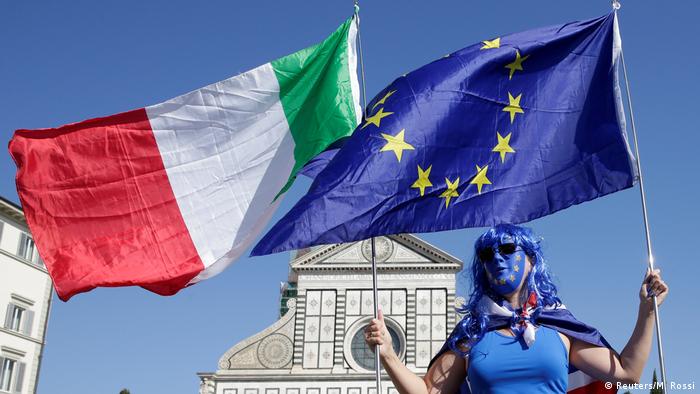 Over two months have passed since Italy's parliamentary election. So far, the country is still without a new government.

The populist far-right party League (La Lega) and the similarly populist 5-Star Movement (M5S), which came first and second respectively, are at loggerheads. Italy's center-left Democratic Party (PD) suffered a major electoral defeat and has now resigned itself to a role in opposition.

All attempts at building a coalition comprising populists, the far-right or moderates have failed. Italian President Sergio Mattarella has said that so far all his efforts have been in vain, as none of the parties are willing to make concessions.

M5S is now calling for a fresh election in June. And the far-right favors a new election toward the end the year. Every party has its preferences, depending on when it thinks elections could provide it with a parliamentary majority.

But Mattarella is well aware that many Italians are frustrated, and expects that a new round of voting would probably just produce the same outcome: political deadlock. And many would see this a waste of money. Which, given Italy's irresponsibly high debt, would not be a good choice.

Thus, Mattarella is making one more effort this Monday to bring the country's left-wing and right-wing populists, as well as the PD, together for a final round of talks. A coalition between M5S and PD — or rather what remains of the center-left PD party — is still an option. Likewise, M5S could join forces with far-right La Lega. But that would require the conservative former Prime Minister Silvio Berlusconi and his revived Forza Italia party to step out of the running, something the 81-year-old is not ready to do.

If this last-ditch effort at coalition building fails, Mattarella may install an interim government of "technocrats," which would then decide on the 2019 budget and prepare fresh parliamentary elections for the coming spring. An interim government would, however, need to receive parliamentary backing, something that is not guaranteed in the current polarized political atmosphere.

Another possibility could be that incumbent Prime Minister Paolo Gentiloni simply remains in office. Although agreeing on the next budget without the support of a parliamentary majority will prove challenging.

The only reason why Italy can afford this phase of political instability is that the country's economy is currently showing signs of slight growth. Financial markets are relatively unfazed by the unresolved coalition question. Currently, Italy pays little interest on loans to refinance its massive national debt.

DW's Bernd Riegert is based in Brussels

It would be best for the markets and for the stability of the eurozone if an interim government took control in Rome. After all, Italy is an important eurozone member.

Such an interim government would offer greater stability and could be relied on more than any coalition of left-wing or right-wing populist parties. Things could soon turn messy, should the euroskeptics take over at the helm.

If the markets lose faith in someone like M5S' Luigi Di Maio or La Lega's Matteo Salvini, this could quickly have dire financial consequences with Italy suddenly struggling to refinance its debt. Then, the European Financial Stability Facility (EFSF) would have to kick in. And the European Central Bank may decide to raise its interest rate, which would automatically make Italiangovernment bonds more expensive.

This could have fatal consequences for an economically weak and politically unstable Italy. The European Union would have to loan Italy hundreds of billions of euros; bailing out Greece would almost pale in comparison.

Italy's political landscape today is like its Neapolitan sleeping giant, Mount Vesuvius. The surface appears calm, but it could erupt at any time, causing severe chaos and destruction.