The first mayoral vote in March was annulled after the ruling AKP party's losing candidate cried foul. Critics say the rerun is proof that President Recep Tayyip Erdogan does not want to lose his grip on power. 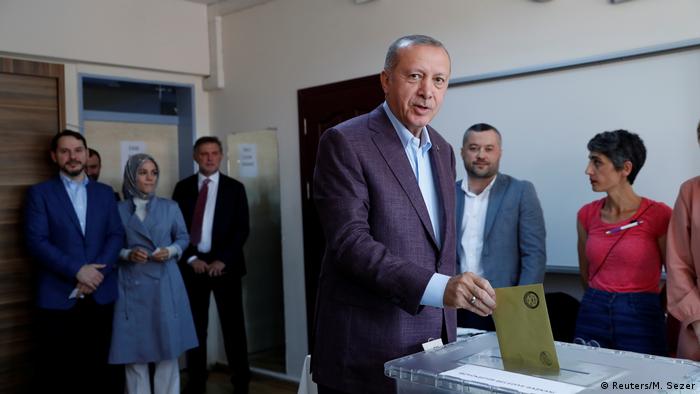 Istanbul residents headed back to the polls on Sunday to elect the city mayor after the first vote in March was declared void by election authorities due to rigging complaints.

The AKP, which also lost the mayoral seat in the capital Ankara, alleged corruption in the Istanbul tally and demanded second vote.

The main opposition party, the Republican People's Party (CHP), bagged over 30% of the countrywide vote, while the AKP won 44% overall.

The March local elections were seen as a key test for Erdogan's popularity. Winning the Istanbul mayorship is also crucial for the Turkish leader, as the large metropolis plays a decisive role in the presidential election. The contest is also personal for Erdogan — he was born in Istanbul and launched his political career as the city's mayor in the '90s.

President Erdogan said he hoped that voters would "make the best decision for Istanbul," as he cast his ballot.

A 'lose-lose' situation for Erdogan

Opposition candidate Imamoglu dubbed the Sunday rerun of vote a "battle for democracy." Can Ekrem Imamoglu pull another victory in Istanbul?

Imamoglu said Istanbul citizens were voting "for the sake of our democracy, for Istanbul and also for the legitimacy of all future elections."

Fearing fraud, the opposition has mobilized an army of election monitors from across Turkey, with the Istanbul Bar Association unfurling a huge banner at their headquarters that reads: "Stand guard for democracy."

Analysts say President Erdogan faces a "lose-lose" situation on Sunday: an embarrassing second defeat, or a victory which will be seen as stolen out of the opposition's hands.

Erdogan has played down the significance of the Sunday vote, saying it is "only a change in the shop window" since the AKP already runs almost two-thirds of the city's districts.

But Murat Yetkin, a journalist, says that a win for Imamoglu would cause a chain of serious changes in Turkish politics. "It will be interpreted as the beginning of a decline for AKP and for Erdogan as well," he told Reuters, noting that the president himself had called the local elections "a matter of survival."

Another Imamoglu win could also force Erdogan to call a national election earlier than 2023 as scheduled, Yetkin added.

Wolf Piccoli of the New York-based risk analysis firm Teneo Intelligence told the Associated Press that "Imamoglu is the first politician in almost 20 years who could become a credible challenger to Erdogan."

Many AKP supporters believe that there was fraud in the March vote and the rerun was the right decision.

"If there's something like stolen votes, I think it's better to redo the election in the name of democracy," said 45-year-old Huseyin as he queued to cast his ballot.

Experts say that President Erdogan's past electoral successes have been based on a strong economy, but with a weakening currency, increasing inflation and soaring food prices, his conservative AKP party faced a tough challenge for key mayoral seats in March.

Erdogan used the election campaign in March to attack the opposition parties, portraying them as enemies of the country. He also said that Turkey's economic woes were a result of enemy action at home and abroad.

The opposition pro-Kurdish Peoples' Democratic Party (HDP) did not field candidates in several major cities outside their stronghold in the southeast, which gave the opposition a boost as many Kurdish people voted for CHP candidates in Istanbul and Ankara.

Over the past several years, dozens of HDP politicians have been jailed on terror charges and the government replaced local mayors and officials with appointees.

Independent observers say that opposition parties campaigned at a disadvantage in March because Erdogan's daily rallies dominated the media, which are either pro-government or controlled by the president's supporters.

Since a failed military coup in 2016, President Erdogan has tightened his grip on power and has launched a crackdown on rights groups, civil society and opposition activists.

Over 10 million people were eligible to vote in Sunday's election.

The result had been under review after President Erdogan and his AKP party cried foul. The president has called for a rerun of the vote, yet it is unclear if the election board will accede to that wish. (17.04.2019)