President Erdogan had argued that the margin of votes was too small for the opposition party win to be valid. The man who won the vote said the electoral body had made a "treacherous decision."

Turkey's electoral authority has ordered that the vote for mayor of Istanbul be rerun, state media reported on Monday, after the March 31 vote was narrowly won by the opposition CHP party.

President Recep Tayyip Erdogan's AKP party had filed a motion with the Supreme Electoral Council (YSK) on April 16 to nullify the election, alleging "irregularities." The objection also claimed that a margin of only 15,000 votes in a city as large as Istanbul was too close to be fair.

Turkish newspaper Haberturk said that the reason given for the new vote was that some ballot box workers were not official civil servants and that some results documents were unsigned.

The YSK had previously confirmed CHP candidate Ekrem Imamoglu the winner of the mayoral race in Erdogan's hometown, as the AKP launched its "extraordinary objection" to the results.

'It is illegal to win'

Imamoglu said he "condemned" the YSK for the decision, telling supporters late on Monday that the CHP had "won with the sweat of millions of people."

"They are trying to take back the election we won. Maybe you are upset but never lose your hope," he said.

A CHP spokesman said the move was neither legitimate nor democratic, calling it "plain dictatorship" on the part of Erdogan and the AKP.

"It is illegal to win against the AK party," CHP deputy chairman Onursal Adiguzel wrote on Twitter. 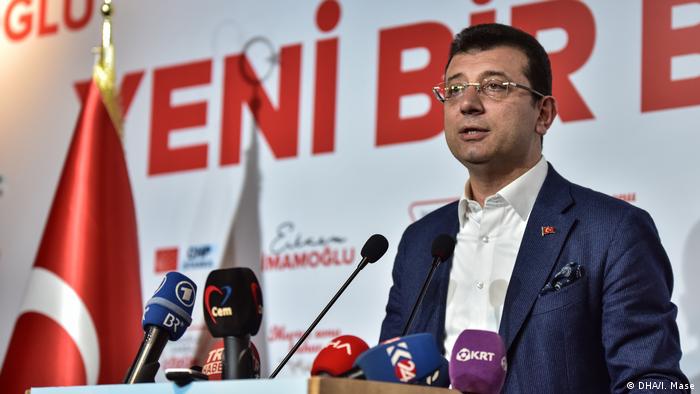 Ekrem Imamoglu had already been declared the winner by the YSK

The European Union called upon Turkey to make the justification for the decision "available for public scrutiny without delay."

EU foreign policy chief Federica Mogherini said "the justification for this far-reaching decision, taken in a highly politicized context, should be made available for public scrutiny without delay ... Ensuring a free, fair and transparent election process is essential to any democracy and is at the heart of the European Union's relations with Turkey."

The head of the Council of Europe, Thorbjorn Jagland, said an election rerun had "the potential to severely damage the trust of the Turkish voters in the electoral authorities."

Although the AKP won the majority of races during the country's regional elections, it lost the key leadership positions in the cities of Istanbul and the capital, Ankara. The AKP has not demanded a recount or fresh vote for the Istanbul local assembly, where it won a majority of seats.

Erdogan has previously compared winning Istanbul to winning nationwide, and he campaigned heavily on behalf of the AKP.

The new vote is reportedly scheduled for June 23.

CHP chief Kemal Kilicdaroglu was beset upon by protesters at a soldiers funeral. President Erdogan's AKP has come under fire for promoting partisan discord. (21.04.2019)

Officials from Turkey's ruling AKP party have described "numerical mistakes" in local elections in major cities across the country. In Istanbul's mayoral race, the opposition candidate holds a paper-thin lead. (07.04.2019)