The result had been under review after President Erdogan and his AKP party cried foul. The president has called for a rerun of the vote, yet it is unclear if the election board will accede to that wish. 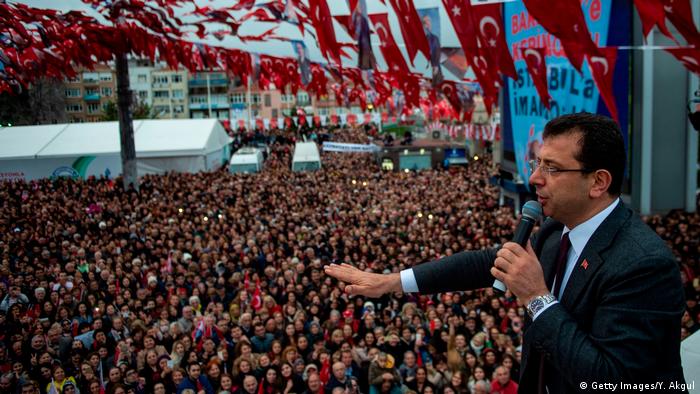 Speaking from the steps of city hall Wednesday, the 48-year-old Imamoglu called the victory, "a new dawn for Istanbul."

Read more: Opinion: The beginning of the end for the Erdogan era

Promising to be the mayor for all of Istanbul's 16 million residents, he urged people to put aside political differences and work together, saying, "The people granted me the honor of leading the most beautiful city in the world … I pledge that I will repay my debt."

Wednesday's decision came after a two-week recount of ballots at the behest of President Recep Tayyip Erdogan and his ruling Justice and Development Party (AKP).

On Tuesday, Erdogan's ruling AKP, joined by the Nationalist Movement Party (MHP), filed a new "extraordinary objection," calling on the High Election Board (YSK) to annul the vote altogether and hold new elections.

Erdogan, a purveyor of conspiracy theories, complained of "organized crimes" in the loss.

Uncertainty over the state of the appeal could drag the Turkish lira down farther than it has already. Although Wednesday's ruling put a stop to a two-week slide in the currency's value, investors will view the uncertainty of a protracted legal fight with caution.

A stinging defeat for Erdogan

Imamoglu's victory was a stinging defeat for Erdogan, himself the former mayor of the city. Despite the fact that his party won many of March's nationwide municipal and provincial ballots, two prestigious mayoral posts eluded the AKP — in Istanbul, the country's largest city; and Ankara, the capital.

The AKP has won every election it has contested since it was founded 17 years ago.

Erdogan campaigned heavily for second-place finisher Binali Yildirim, who, after the recount, was still 14,000 votes behind Imamoglu — narrowing the tally from 25,000 on March 31. The president called the vote a matter of national survival.

The opposition candidate, on the other hand, ran a grassroots campaign, personally going from door to door to speak with voters about local issues.

Although Erdogan has enjoyed popularity as a result of Turkey's relatively buoyant economy, the economic picture has been less rosy of late as a result of last year's currency crisis, which led to skyrocketing inflation and recession. He has promised to concentrate on the economy until new elections in four-years' time.

Yet, Erdogan's opponents deride him as a strongman who is eroding Turkish democracy and the rule of law. That image has only been strengthened by his intense crackdowns since a failed 2016 coup. Tens of thousands of people, including opposition politicians and journalists, have been arrested since then.

Istanbul, which makes up roughly 31 percent of Turkey's GDP, is not only important for investment and tourism, many see it as the heart of the country, as Erdogan repeatedly exclaimed in the March election campaign: "Whoever wins Istanbul, wins Turkey. Whoever loses Istanbul, loses Turkey."