Israel's foreign minister is the first to visit the Gulf state. He has opened the nation's embassy in Abu Dhabi and will open a consulate in Dubai. He will also sign an economic cooperation pact. 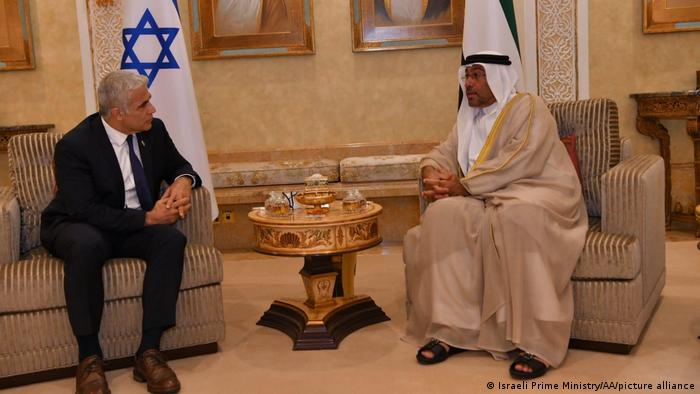 Israel's Foreign Minister Yair Lapid arrived in the United Arab Emirates on Tuesday for the first official visit by an Israeli foreign minister to the Middle Eastern kingdom.

Before leaving for Abu Dhabi, Lapid tweeted a picture of himself from inside the plane with the caption: "Taking off for a historic visit to the UAE."

Even though Israeli ministers have previously visited the UAE, Lapid is the first one to travel there on an official mission.

The trip provides a chance for the 2-week-old Israeli government, headed by new Prime Minister Naftali Bennett, to make diplomatic inroads in the region.

At the start of his two-day visit to the UAE, Lapid inaugurated Israel's embassy in Abu Dhabi.

"Israel wants peace with its neighbors. With all its neighbors. We aren't going anywhere. The Middle East is our home. We're here to stay. We call on all the countries of the region to recognize that. And to come talk to us," Lapid said during the ceremony. 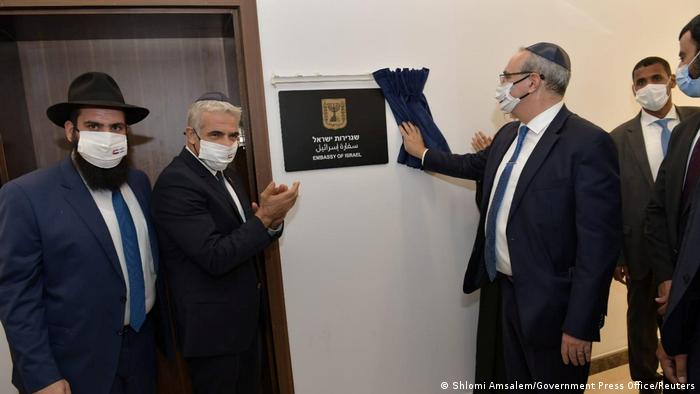 On Wednesday, Lapid will inaugurate Israel's consulate in Dubai.

During the trip, the foreign minister will also sign an agreement on economic cooperation with the oil-rich Gulf nation.

The trip comes after both Israel and the UAE decided to normalize relations last year.

After Lapid had departed for Abu Dhabi, Israeli Foreign Ministry spokesman Lior Haiat told reporters that the pace of bilateral cooperation between the two countries has been "unprecedented."

"There's been years of under-the-radar relations between Israel and the UAE, and we are now enjoying the fruits of the infrastructure of peace that we've built in the last decades,'' Haiat said.

Bahrain, Morocco and Sudan also normalized ties with Israel under the accords.

Since the normalization deal, Israel has signed a number of economic deals with the UAE, ranging from tourism to aviation and financial services.

Bilateral trade is already expected to have exceeded $354 million (€297 million), according to the Israeli Foreign Ministry.

The UAE formally opened its embassy in Tel Aviv, temporarily located in the Tel Aviv stock exchange, to little fanfare earlier this month.

US President Joe Biden is on his way to the Middle East for his first visit since taking office. Biden's first stop is Israel, where he will meet with the country's interim prime minister, Yair Lapid, and with Palestinian leaders in the West Bank.