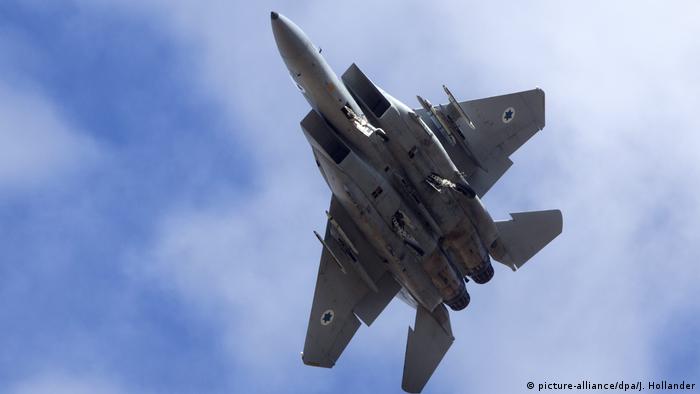 The Israel Defense Forces (IDF) announced on Sunday that it launched airstrikes against Hamas targets in Gaza in response to a projectile fired into Israeli territory.

On Twitter, the IDF said a rocket was fired on Saturday night, prompting air raid sirens. "We responded by striking several military targets in a Hamas compound in Gaza and two Hamas vessels," the IDF said.

The airstrikes were also in response to "continued violence emanating from the Gaza Strip, which has included the launching of balloons carrying explosive devices and attempts to damage security infrastructure over the last number of days."

On Friday, a 23-year-old Palestinian was shot dead during clashes at the Israel-Gaza border. Forty-three other protesters were also wounded during the clashes.

Rising tensions ahead of elections

Tensions are rising between Israel and the Hamas militant group, which has controlled the Gaza Strip since wrestling control from the Palestinian Authority in 2007. Since then, the militant organization has fought three wars against Israel.

The escalation comes as Israel gears up for elections. Prime Minister Benjamin Netanyahu has been accused of incitement throughout his campaign, with challengers saying he is invoking "Arab hatred" to appeal to his nationalist base.

However, support for Netanyahu has dwindled after Israeli's attorney general announced last month that he intends to indict the prime minister on corruption charges. In the 2015 election, Netanyahu won the election by galvanizing last-minute voters, alleging on election day that "Arab voters are heading to the polling stations in droves" and that "left-wing NGOs are bringing them in buses."

But Netanyahu could lose votes if the escalation translates into Israeli casualties. According to some analysts, constituencies that see soldiers from their area killed during a conflict often vote against the ruling party. However, Netanyahu remained defiant on Sunday.

"I have heard people from Gaza saying that since we are in an election campaign, a large-scale operation is out of the question," said Netanyahu on Sunday. "I suggest to Hamas — don't count it. We will do whatever it takes to restore security and quiet to the Gaza border communities and to the south in general."

In February, Israeli media reported that the government used mediators to warn Hamas against any escalation, saying: "Israel can make tough decisions during elections and is not afraid of a military campaign."