Prime Minister Benjamin Netanyahu's Likud is tipped to win April elections and form another right-wing government. But after his main challengers announced a joint list, the race could take an unexpected twist. 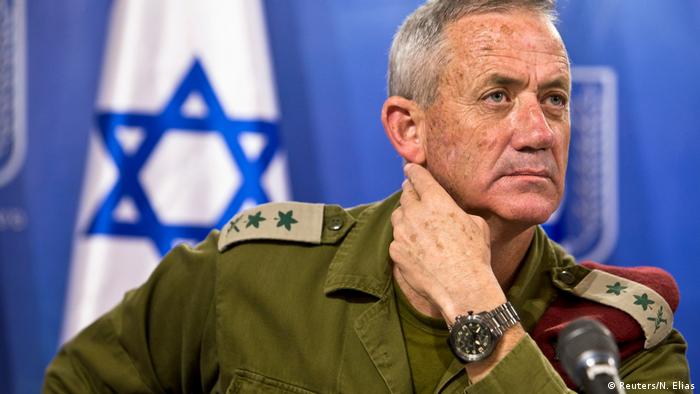 Israeli Prime Minister Benjamin Netanyahu's two chief challengers joined forces on Thursday ahead of April elections in a bid to overcome the right-wing Likud and its allies.

Benny Gantz, a former military chief of staff, and Yair Lapid said they would form a joint list for the April 9 election and rotate as prime minister.

"The party will put forward a new leadership team which will guarantee the security of Israel and will reunite the divided elements of Israeli society," they said in a statement.

Gantz leads the new Israel Resilience party, while Lapid heads Yesh Atid, which currently has 11 seats in the parliament.

Former Defense Minister Moshe Yaalon had previously also joined the Israel Resilience ticket. Former Chief of Staff Gabi Ashkenazi will also join the new alliance "out of a sense of the significance of this moment and out of national duty," the statement said.

Under the agreement, Gantz would serve as prime minister for 2 1/2 years followed by Lapid, an ex-finance minister.

Polls suggest a Gantz-Lapid alliance with the backing of former military brass to give it security credentials could pose a challenge to Likud, which is expected to get 30 seats in the 120-seat Knesset.

Reaction on the right

Since Israel was founded in 1948, no one party has formed an outright majority, meaning that the top party has to search for coalition partners. Netanyahu's has been in power for nearly 13 years and currently runs what is considered the most right-wing government in Israeli history.

Facing three corruption investigations and possible indictment, Netanyahu has taken a further hard turn to the right in the run-up to the election to shore up his religious-nationalist base.

To rally the right, Netanyahu has sought to label his opponents as "weak" leftists and on Wednesday orchestrated a unification of ultra-right parties with an eye on forming his next coalition government.

Likud in a statement said it intended to unite "the ranks in order to ensure that the votes of the right will not be lost."

Jewish Home and National Union have long been aligned, but the move to bring in extreme right Jewish Power is controversial.

As former head of the Kach party, Kahane served one term in the Knesset in the 1980s and the party was later banned for being racist. He was assassinated in New York in 1990.

An Israeli MP accused an Arab celebrity of "seducing a Jewish soul" while the interior minister warned of assimilation. The racism from the Israeli right provoked a sharp rebuke from liberal circles. (12.10.2018)

An Amnesty International report says travel sites are "driving settlement expansion" in Israeli settlements, a claim that has sparked outrage in Israel and among Jewish groups. (30.01.2019)