Deadlocked and divided: What now for the Palestinians? | World | Breaking news and perspectives from around the globe | DW | 28.11.2018

Deadlocked and divided: What now for the Palestinians?

Palestinian leaders are deadlocked with Israel, face internal challenges and have clashed with Washington. DW’s Conflict Zone met Chief Palestinian Negotiator Saeb Erekat and asked him about his next steps.

Relations between Palestinian leaders and Donald Trump’s administration have reached a low point, and Saeb Erekat has now suggested that Washington deserves a better leader.

"This White House requires giant statesmen and not real estate agents," said Erekat, who is the Secretary-General of the Palestine Liberation Organization’s Executive Committee and the chief Palestinian negotiator.

The U.S. government has angered Palestinian authorities by relocating its embassy in Israel from Tel Aviv to Jerusalem, cutting millions of dollars in aid to Palestinian refugees and shutting down the Palestinian Liberation Organization’s mission in Washington.

Erekat was talking to DW’s Conflict Zone host Tim Sebastian at a special event during the Berlin Foreign Policy Forum, an annual gathering of high-ranking politicians organized by the Körber Foundation in the German capital.

Erekat accused the US president of acting unilaterally rather than focusing on negotiations, despite the fact that he and Palestinian Authority President Mahmoud Abbas met with Trump and his team 37 times in 2017.

The chief Palestinian negotiator added that by recognizing Jerusalem as Israel’s capital, Trump has disqualified himself from any role as a peace mediator. 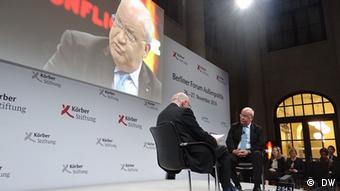 Erekat criticized Donald Trump and said the US President acted unilaterally rather than focusing on negotiations.

Erekat and other Palestinian leaders are also facing considerable challenges at home, including factional divisions.

The chief negotiator said there are 26 Palestinian parties and described Palestinian Islamist group Hamas as one of them.

He said he is "not trying to exclude them," but "they have to understand that I cannot have a Palestinian state without having one authority, one gun and the rule of law."

There is also skepticism among the population.

A recent poll revealed that 67 percent are dissatisfied with the performance of the Palestinian Authority and 73 percent view conditions today as worse than before the Oslo agreements, the first of which was signed in 1993.

Erekat admitted they have "an overloaded wagon of complexities," but he also stressed that they have done "in these 20 years more than any country in the Third World did in 63 years" in terms of "building institutions (and) democracy." 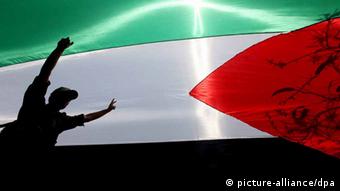 Many Palestinians are dissatisfied with the performance of the Palestinian Authority.

Tim Sebastian asked Erekat about reports of corruption in the Palestinian Authority, including nepotism, bribery, abuse of public funds and lack of transparency.

DW's Conflict Zone host cited a recent survey which showed more than 80 percent believe there is widespread corruption in the Palestinian Authority.

Erekat admitted that there is corruption, but he argued that "those who commit acts of corruption are put in front of a court."

The human rights situation has also been under scrutiny in the Palestinian territories.

A recent report by Human Rights Watch (HRW) highlighted how "in the 25 years since Palestinians gained a degree of self-rule over the West Bank and the Gaza Strip, their authorities have established machineries of repression to crush dissent." 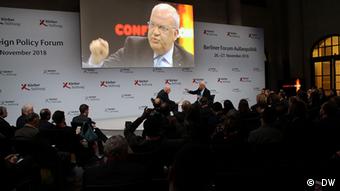 The interview with Saeb Erekat was part of the Berlin Foreign Policy Forum.

Tim Sebastian asked Erekat about this report, and the chief Palestinian negotiator said HRW is a "respected organization."

"We took the report very seriously," he added, stressing that Palestinian leaders met, issued a statement and formed a committee to investigate "every single matter."

Erekat furthermore promised that those responsible for these "atrocities" would be held accountable.

DW’s Conflict Zone interview with Saeb Erekat at the Berlin Foreign Policy Forum was followed by questions from the audience for the chief Palestinian negotiator.

Erekat was critical of Israeli Prime Minister Benjamin Netanyahu, saying he is "destroying the two-state solution because he wants to replace it with 'one state, two systems'." Erekat described that as "apartheid."

However, when asked to present concrete steps in order to move forward, Erekat appealed directly to Netanyahu and offered a meeting.

"I challenge Mr Netanyahu officially," he said. "He can choose any country, any country on Earth."

"No one benefits more in achieving peace than the Palestinians and no one stands to lose more in the absence of peace," he added.

Israeli sources have previously indicated Netanyahu had "made contact" with Abbas but that the latter refused to meet.

Tune in at 17:00 UTC for a live edition of Conflict Zone. Tim Sebastian will be interviewing longstanding Palestinian chief negotiator Saeb Erekat at the Berlin Foreign Policy Forum. (27.11.2018)

Erekat: 'Trump should send a message of peace'

Donald Trump has announced plans to relocate the US embassy to Jerusalem. That would mean there is no hope for the two-state solution, says Saeb Erekat, the secretary-general of the Palestine Liberation Organization. (24.01.2017)