At least two members of the Islamist group Hamas have been killed in airstrikes targeting military facilities. Israeli Defense Forces said it responded to rocket fire coming from the Gaza Strip during the "day of rage." 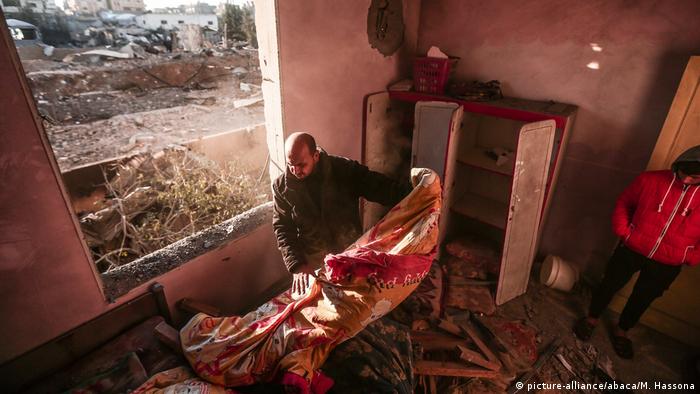 Israeli airstrikes killed at least two people on Saturday after targeting military facilities in the Gaza Strip allegedly linked to the armed wing of the Islamist group Hamas.

Militant groups operating in the Gaza Strip launched missiles into Israel on Friday amid mass protests and clashes against US President Donald Trump's decision to recognize Jerusalem as the Israeli capital earlier this week.

An Islamist militant group calling itself the Salahedin Brigades claimed responsibility for one of the attacks. However, the Israeli Defense Forces (IDF) said it holds Hamas responsible for "all hostile acts against Israel emanating from the Gaza Strip."

"In response to the projectiles fired at Israel from the Gaza Strip … Israel air force aircraft targeted a Hamas training compound and an ammunition warehouse in the Gaza Strip," the IDF said in a statement.

The targets included "two weapons manufacturing sites, a weapons warehouse and a military compound," according to the IDF.

On Friday, thousands in the occupied Palestinian territories and across the globe took to the streets to protest the White House's decision to recognize Jerusalem as Israel's capital, marking a major shift in the US foreign policy on the issue. At least two Palestinians were killed during clashes in the Gaza Strip.

Trump's decision has sent shock waves throughout the region and across the globe, with US allies condemning the move, saying it undermines the peace process.

However, the US remained defiant, with US ambassador to the UN Nikki Haley saying: "The United States will not be lectured to by countries that lack any credibility when it comes to treating both Israelis and Palestinians fairly."

The status of Jerusalem has been a key stumbling block during previous peace negotiations between Israelis and Palestinians, in particular regarding the question of how to divide sovereignty and oversee holy sites.

While Israel regards Jerusalem as its capital, a majority of the international community rejects that claim, saying the city's status should be settled in peace talks with the Palestinians.