A series of weekly demonstrations have taken place across Israel, with thousands of people demanding Prime Minister Benjamin Netanyahu resign over corruption charges and inaction during the coronavirus crisis. 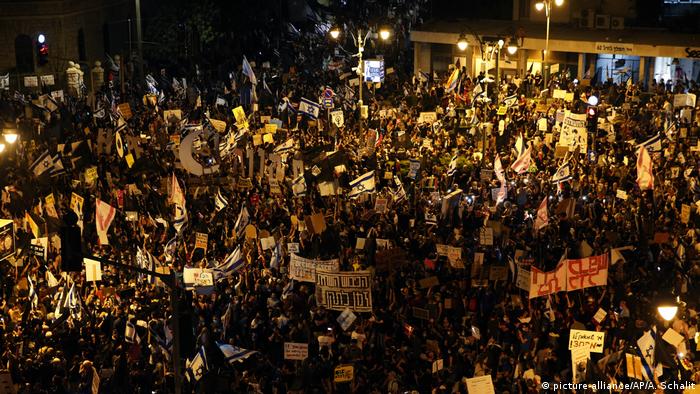 Thousands of protesters rallied outside Israeli Prime Minister Benjamin Netanyahu's residence in Jerusalem on Saturday, decrying his government's handling of the coronavirus pandemic and saying he is distracted by a corruption trial.

Nearly 15,000 people took to the streets in Jerusalem alone. Placards reading "Your time is up" and "Crime Minister" could be seen amidst the sea of protesters.

For months, a series of weekly demonstrations have taken place across the country, drawing a growing number of people who are angry with the government's COVID-19 response and the economic impact of the pandemic.

"You'd think that a once-in-a-lifetime crisis like this would push Netanyahu to act, and it hasn't. Enough is enough," Yael, a local protester who declined to give her last name, told Reuters news agency. She lost her job at a Tel Aviv restaurant amid the downturn.

Protesters in Israel call on PM Netanyahu to resign

Many critics believe that Netanyahu has failed to adequately address the coronavirus crisis while he battles corruption charges. He has denied all wrongdoing.

"Netanyahu is fighting to get Israel's economy back to normal and to transfer funds and grants to Israeli citizens," the prime minister's right-wing Likud party said in a statement. The party also referred to the protests as "left-wing riots" and called the demonstrators "anarchists."

Israel began lifting its coronavirus-induced partial lockdown in May, however critics argue the move came too quickly. The country is struggling to deal with the economic repercussions of the pandemic amid a renewed surge in COVID-19 cases.