Israelis have been taking to the streets in increasing numbers for weeks, protesting against the right-wing government led by Prime Minister Benjamin Netanyahu. The country is at a crucial juncture. 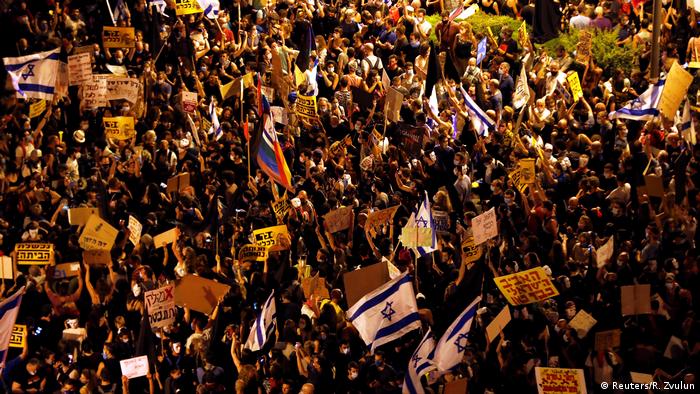 This was just the latest in a series of weekly demonstrations which have rocked Israel for months, drawing a growing number of people who are angry with the government's handling of a second wave of COVID-19 infections and the economic impact of the pandemic.

Political dissatisfaction is at the heart of these protests.

"To put it in two words, the main goal is 'Bibi – resign,' says 59-year-old Tali Etzion from Tel Aviv, who's been participating in anti-government demonstrations since the country's 2011 social protests, which saw hundreds of thousands in the streets demanding economic justice and an end to corruption.

"In more than two words, we all believe, each one from their own angle, that Netanyahu is the wrong person to lead a country — in so-called normal times and even more so in times like these," Etzion explains, referring to the management of the coronavirus crisis. 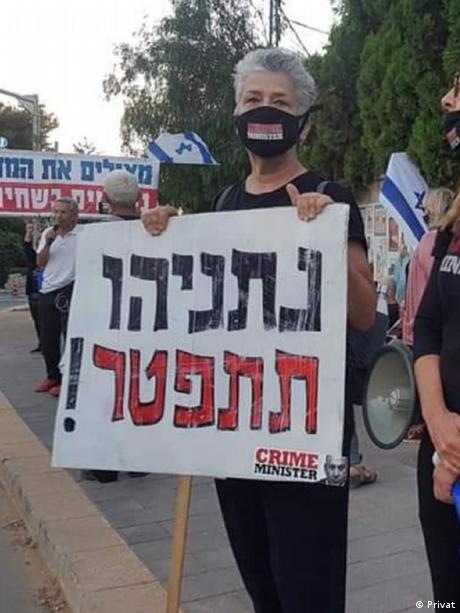 "The gap between citizens whose lives have been so badly damaged and people who claim to be leaders but pad themselves to no end is unbearable," says Ofer Shelley, 50, a pianist and concert producer from Jerusalem, whose livelihood as a musician has been severely affected by the government's "complete detachment from the people," as he calls it.

"None of our leaders stand up and say 'I see your suffering, I see the distress.' They don't even bother talking to the people protesting. Not once."

Both Netanyahu and ministers from his right-wing Likud party have labeled the demonstrations as "Leftist protests," and called their participants "anarchists." This view is shared by some in the Israeli public, but many — including the protesters themselves — beg to differ.

"Netanyahu denies the nature of the demonstrations, their scope and even the identity of their participants," says Efrat Safran, 57, a longtime protester and a trained lawyer from the central city of Ramat Hasharon, who's also a member of a protest group called "Mothers Against Police Violence," meant to serve as a buffer between protesters and police.

"No single body or person is organizing this," she says. "The protests have grown organically and include people from across the political spectrum," including what she refers to as "disillusioned" Netanyahu voters.

And indeed, in a now-viral tweet, a protester called Arnon Grossman, a self-declared Likud voter, is seen explaining on video why he'd been attending the anti-government rallies, while other Likud supporters are holding a sign which reads "Bibi, also Likud voters are against dictatorship."

Grossman told Israeli blogger Or-ly Barlev that he has been voting Likud for years, but "as long as Netanyahu is leading it" he would no longer do so. "I would expect a leader to treat people with compassion in such difficult times," he explained. "To be honest, I feel guilty. It's because of people like me that he's in his position now."

Judging by the various signs spotted in the protests — especially those in Balfour street in Jerusalem, the official residence of the Israeli prime minister — the discontent is widespread.

"For some, it's the economic situation, for others it could be the decaying democracy or the endless corruption scandals," Safran says. "There is room for everyone, but one message is clear: Bibi, go home."

Where are the young ones? 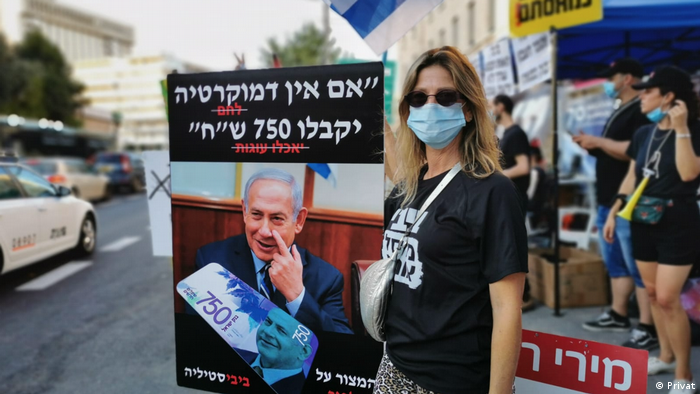 For years, longtime protesters couldn't understand why the younger generation wasn't joining them. After all, "we've already built our homes and careers, but what about them? It's their future," says Safran.

"My children, who are in their twenties, were born into a Bibi-reality. They don't know anything else and they didn't believe anything could be different," says Etzion.

But three election rounds in the span of one year, mounting corruption scandals involving Netanyahu, rising unemployment in the shadow of a global pandemic, and finally, the arrest of a former army general-turned protester, all seem to be changing young Israelis' previous apathy.

One such young protester is Amir Gertmann, a 22-year-old student from Jerusalem, who attends the Balfour demonstrations regularly. "I have no real hope for these protests. I don't see Netanyahu resigning or his coalition partners distancing themselves from him," he says.

"And yet it's important to me to come, mainly because I can't accept an attempt to crack down on a legitimate demonstration against the government a mere five-minute walk from my home without trying to oppose it."

One step from a dictatorship

Many young Israelis like Gertmann have little chance of entering the workforce after finishing their studies. If you ask Shy Engelberg, a 36-year-old protester who works in hi-tech, it's no surprise that these young people are now leading the protests.

"Netanyahu has caused only harm to Israel. He lies, sows hatred and uses dark methods, learning from people like Trump, Putin and Erdogan," he says. "I wouldn't want my children to grow up in a country where their vote has no meaning. Eventually, people feel that democracy is slipping through their fingers."

Although the protests have largely been peaceful, in some cases they have ended with clashes between demonstrators and police. In others, small gangs of Netanyahu supporters and individuals affiliated with far-right groups or groups of football ultras have assaulted the anti-government demonstrators.

At a recent Cabinet meeting, Netanyahu also slammed the media for "inflaming" the protests and for misrepresenting incidents of violence. "There has never been such a distorted mobilization — I wanted to say Soviet-style but it has already reached North Korean terms — of the media in favor of the protests," he said.

Etzion maintains that for Netanyahu it's all about political survival, "and if he needs to turn Israel into a dictatorship in the process — so be it."

It's left the country at a crucial juncture, says Safran. "It's impossible to even start talking about left or right here when in a moment, for the first time in 72 years, we might no longer be a democracy. No reconciliation will start until he steps down, and the danger to democracy will not go away. Soon, there will be no country left."