Likud MP Nir Barkat: We have to 'upgrade' legal system

Protesters in Israel want the prime minister to resign over corruption allegations, which he has denied. A Likud party ally tells Conflict Zone why the PM should carry on and that the legal system has to be reformed.

"We have to restructure some of the elements in the relationship between the parliament and the government and the legal system," Nir Barkat, an Israeli MP and ally in Prime Minister Benjamin Netanyahu's Likud party, has told DW's Conflict Zone.

"All systems in our country, and I believe also in yours, need to upgrade and change in time," said Barkat.

The Likud party has clashed with Israel's Supreme Court, which sometimes had "an extreme opinion on matters," Barkat said from Jerusalem. But they were "not at war" with the court and its judgments would be accepted.

In June, the court struck down a law that retroactively legalized 4,000 settler homes in the occupied West Bank. The government's settlements minister, Tzipi Hotovely, said at the time the court had "declared war on the right of the Jews to settle in the Land of Israel."

"There are other democracies in the world that don't enable [the Supreme Court] to rule out laws that are defined by the parliament," Barkat said.

He denied that reforming this relationship was an attempt to bully the court but seemed to suggest that the favored model was a more politically sympathetic judiciary.

"The answer is that we look at other democracies in the world and we see that the relationships are different," he said, citing the example of the United States, where Supreme Court justices are nominated by the president.

Prime Minister Netanyahu is currently on trial over alleged corruption. He denies any wrongdoing and has called the affair a "witch hunt" and a "coup attempt."

Barkat, who hopes to succeed Netanyahu when he eventually steps down, was asked by Conflict Zone host Tim Sebastian if he bought the idea that the trial was a conspiracy against the PM.

"Netanyahu believes in his innocence and he feels that he is getting an unfair treatment both by the press and many, many other elements, maybe also in the police and in other elements of the legal system in our country. That's what he feels and he's saying that," Barkat said.

In July, thousands of people demonstrated outside of the prime minister's official residence, with many calling for him to resign over the allegations.

But Barkat said the prime minister's problems were not the most important issue for Israelis.

"There are challenges on economics and the medical side and the trial, which is happening in parallel, is not an issue for us Israelis here," he said.

Asked why the prime minister doesn't stand down in order to clear his name, Barkat said that it made sense for Netanyahu to carry on and that Israeli law allowed him to do so.

The Supreme Court has said the parliament should consider legislation to avoid again having a criminal defendant serve at the same time as prime minister. Justice Menachem Mazuz said the situation "reflects a social crisis and a moral failure by both society and the political system." 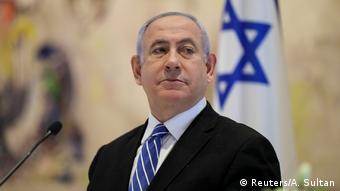 In March, the US State Department accused the Likud party of deploying "messages promoting hatred against Arab citizens" during April and September elections.

Was the party so desperate that it had to resort to such tactics?

"I was mayor of Jerusalem for a decade, 10 years. And any time I heard somebody speak hatred to any side, I was always against it," Barkat said. "We are a party that focuses on how to live together."

"People get carried away in elections" on all sides and not only in Israel, he went on to say.

Sebastian challenged Barkat that the issue went beyond elections. Seventy-eight percent of East Jerusalem's Arab residents and 86% of Arab children there lived in poverty in 2017, according to figures from the Jerusalem Institute for Policy Research.

Barkat said he had focused on improving education, but many Arab residents had chosen the Palestinian education system, which he said was poorer.

"We've done everything to improve both quality of life, infrastructure," he said, pointing out that "tourism went up before Coronavirus to high, high numbers."

"When you cooperate with the state of Israel, your situation, economic situation and peace is far, far better than trying to attack us."

In a highly controversial move, Israel may soon begin the process of declaring sovereignty over parts of the occupied territory. It could set back a two-state solution by years and trigger another war in the region. (01.07.2020)

The German parliament has called on Israel to halt its plans to annex settlements in the occupied West Bank. However, it has ruled out the use of sanctions against Israel. (01.07.2020)

After nearly 18 months without a government, Israel has sworn in Prime Minister Benjamin Netanyahu and former rival Benny Gantz in a power-sharing agreement. (17.05.2020)