What will Israel′s West Bank annexation plans mean for the region? | Middle East | News and analysis of events in the Arab world | DW | 01.07.2020

In a highly controversial move, Israel may soon begin the process of declaring sovereignty over parts of the occupied territory. It could set back a two-state solution by years and trigger another war in the region.

Speculation is rife as to whether Israel will proceed with the originally envisioned plan or with an "annexation light" in the occupied West Bank.

The opaque situation has left young Palestinian millennials like Salem Barahmeh in the West Bank city of Ramallah utterly frustrated. "I come from the Oslo generation, we were promised a state and never got one," says Barahmeh, executive director of the Palestine Institute for Public Diplomacy, an independent NGO in Ramallah. "We are extremely frustrated and angry, but we are also disappointed that the world hasn't been listening to us: the land has been settled for very long and you have done nothing about it."

Israel's Prime Minister Benjamin Netanyahu, emboldened by the US Mideast plan released in January, has vowed to annex the Jordan Valley in addition to 135 settlements that are already considered illegal by the international community — an estimated 30% of the occupied West Bank. Now, the Israeli government is reportedly considering annexing several other settlements first, such as Maale Adumim, near Jerusalem and the settlement bloc of Gush Etzion, which comprises several smaller settlements in the southern West Bank. 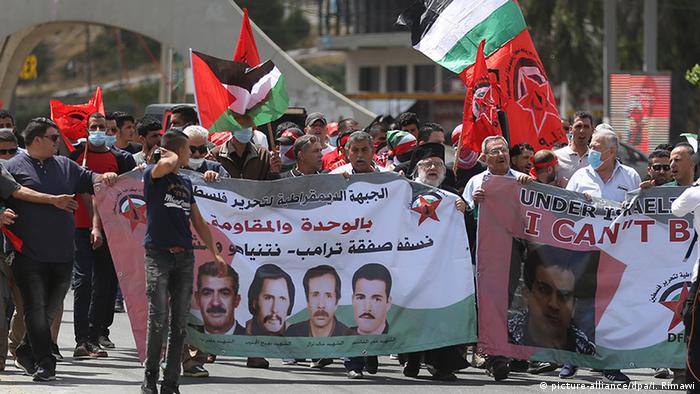 "We are facing a rather monumental moment in the region," said Nickolay Mladenov, the UN special coordinator for the Middle East peace process, in remarks to foreign media in Jerusalem last week. He warned that the unilateral move would contradict international law and several United Nations Security Council resolutions. The move would also jeopardize the long sought two-state solution.

A recent survey by the Jerusalem Media and Communication Center and the German Friedrich Ebert-Foundation showed that around 45% of Palestinians believe that annexation would not leave any chance for a two-state solution. Salem Barahmeh also highlighted current threats to a two-state solution. The Palestinian Authority (PA) administers only 18% of the territory, while Israel maintains overall control. "Israel controls the movement, the water, the utilities and enters towns and villages every night to arrest people. At the moment, we live under a one state reality, where Israel controls everybody between the river and the sea," he added.

Surveys show contradictory findings on Israeli public opinion regarding annexation. "There is a small majority among Israeli Jews that supports some form of annexation but there is no agreement on what kind of annexation. But public opinion is amenable to change," says Ofer Zalzberg, analyst at the International Crisis Group.

Public opinion is likely to shift, he adds, depending on what position Netanyahu's coalition partner, Defense Minister Benny Gantz (Blue and White) takes. Gantz appears to oppose the Jordan Valley annexation against the backdrop of the expected international fallout. Conversely, a poll by the Geneva Initiative in early June found that people were mostly concerned about the economic impact of the ongoing coronavirus pandemic. Among those surveyed, only a minority thought that annexation should be a current priority for the Israeli government.

Adar Keish and Tair Rosenblat are volunteers at Darkenu, an Israeli, left-leaning grassroots organization. Their protest slogan "no to annexation, yes to economy, yes to security,” highlights the concern about the timing of the annexation. Tair thinks the government shouldn't proceed unilaterally. "We don't have the money to deal with this issue right now. But also, we care about the people on the other side and we do want them to be a part of the process." Keish, meanwhile, says that the reactions they've received show that many people are still not aware of what's at stake. "The feeling I get is that people don't really know what we are talking about. I think the problem is that the conflict has been around for such a long time that people just become oblivious to it."

In Ramallah, the Palestinian leadership has halted all working agreements with Israel, including security and civilian coordination. In recent days, some Palestinian officials have also hinted at dissolving the Palestinian Authority, which was created in 1994 as a result of of the Oslo Accords. Although Palestinian Prime Minister Mohammed Shtayyeh has committed to maintain law and order, his government's difficult financial situation has exacerbated political tensions. The PA has recently been unable to pay salaries due to Israel's withholding of tax and customs revenues it ordinarily transfers to the Palestinians. In Hamas-ruled Gaza, the group's military wing has warned that any annexation would be considered a "declaration of war."

While high level meetings continue between US and Israeli officials, the EU seems unprepared for a definitive response. Some EU officials in Jerusalem privately predict a lack of unanimity on the matter within the EU.

Nonetheless, among the measures being discussed behind closed doors are reportedly suspending Israel's participation in EU-funded scientific research programs or banning settlement products, or even limiting Israel's privileged trade agreement with the EU. In several statements over the past months, Joseph Borrell, the EU' s High Representative for Foreign Affairs, had said that any annexation of any part of the occupied West Bank violates international law.