Thousands of protesters in Israel call on Netanyahu to resign

Critics say Benjamin Netanyahu is unfit to lead at a time when he is on trial for corruption. Israelis are also voicing their anger at worsening unemployment and the economic crisis caused by the coronavirus pandemic. 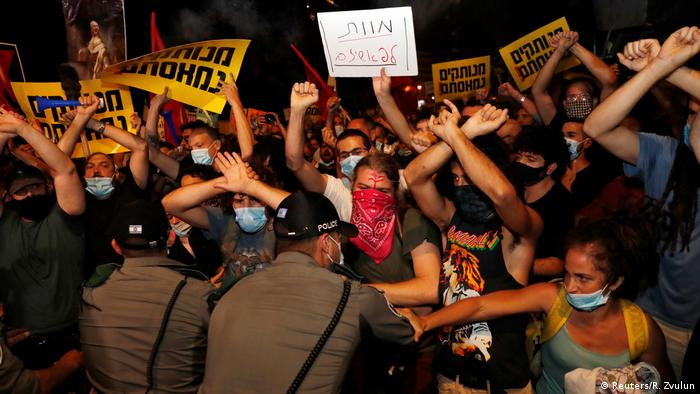 Thousands of Israelis on Tuesday protested outside the official residence of Prime Minister Benjamin Netanyahu in Jerusalem, demanding the embattled leader step down as he faces a trial on corruption charges and as his government comes under fire over its handling of the coronavirus pandemic.

Some demonstrators carried placards that read: "Netanyahu's corruption makes us sick," "Netanyahu, resign," and "crime minister." Many held posters, saying: "You are detached. We are fed up," or saying there is "no way" a politician under indictment can be a head of state.

At least 50 people were arrested for the alleged involvement in the protests.

Reserve General Amir Haskel, one of the protest organizers, called on people to gather on July 14, the "231st anniversary of the French revolution" to "demand liberty, equality and fraternity."

Protester Laurent Cige, who came from Tel Aviv to participate in the demonstration, told French news agency AFP: "The most deadly virus is not COVID-19, but corruption."

Police said they were in force on the scene trying to restore order. Towards the end of the protest, security authorities clashed with some protesters in a small confrontation.

Late in the evening, several hundred protesters marched through central Jerusalem, with some blocking the city's rail line.

The protest took place as Israel's Health Ministry announced more than 1,400 new cases of the coronavirus in the past 24 hours.

Thousands also protested in Tel Aviv on Saturday against Netanyahu's economic policies amid the coronavirus crisis.

A country of some 9 million people, Israel has registered more than 41,200 coronavirus cases with 368 deaths.

Netanyahu, who has been prime minister of Israel for over a decade, has seen his popularity plummet in recent weeks as he comes under fire from all directions.

Critics say he reopened the economy too quickly as Israel is now experiencing a surge of new COVID-19 cases. The country's unemployment figure remains above 20% and opponents say the out-of-touch leader has failed to help thousands of struggling Israelis.

Unemployment has jumped from 3.4% in February to 27% in April, before declining slightly in May to 23.5%.

Netanyahu faces his next trial date at a Jerusalem district court on July 19. He was indicted in January for bribery, fraud and breach of trust in three cases. He stands accused of receiving lavish gifts from billionaire friends and of trading favors with media moguls for more positive coverage of himself and his family.

On March 15, Netanyahu's corruption trial was delayed for two months due to concerns about the coronavirus outbreak.

Netanyahu denies wrongdoing and has refused to resign, maintaining that the charges were a ploy to drive him from office.

In May, Netanyahu formed a new coalition government with retired military chiefs Benny Gantz and Gabi Ashkenazi  after more than a year of political unrest.

Under Israeli law, a ruling prime minister is only required to resign if convicted of a criminal offense with all appeals exhausted. Analysts say that in Netanyahu's case, this could take several years.