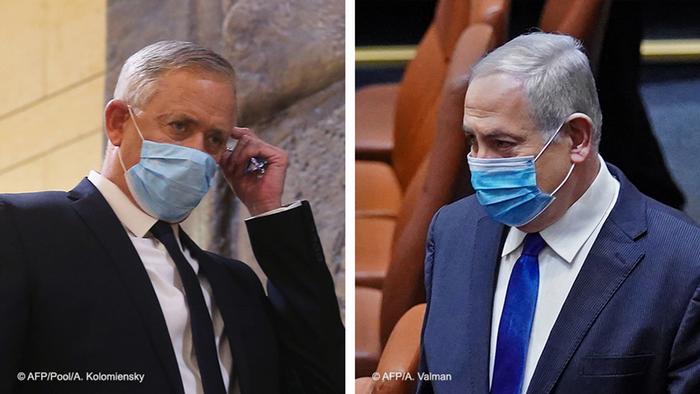 After three elections and more than 500 days without a government, the ongoing political crisis in Israel came to an end on Sunday with the inauguration of a unity government made up of right-wing Prime Minister Benjamin Netanyahu and his former rival, centrist Benny Gantz.

At a ceremony in Jerusalem, Israel’s parliament, the Knesset, the three-year coalition government was formally approved by a 73 to 46 vote. Netanyahu and Gantz were then sworn in as prime minister and alternate prime minister respectively.

Government of 'all Israelis'

"This is an important day for the state of Israel," Netanyahu told the Knesset. "The new government has been formed with the support of most of Israel and will be the government of all Israelis," he said.

He also vowed to push on with controversial plans to annex large parts of the occupied West Bank.

Speaking after Netanyahu, Gantz praised the prime minister for making the "brave and important decision" to cooperate with him, saying their new government would end the “worst political crisis" in Israel’s history.

The pair had agreed last month to a power-sharing deal. An initial inauguration date set for last Thursday was pushed back when Netanyahu requested three more days to make cabinet assignments from his center-right Likud party.

Fighting the coronavirus and improving Israel’s battered economy have also been listed as the new government's policy priorities.

Israel's longest-serving leader, Netanyahu, first came to power in 1996 and has served three consecutive terms since
2009.

He is due to go on trial on May 24 on charges of bribery, breach of trust and fraud, which he denies.

By assuming that "alternate" premiership once he hands over to Gantz, Netanyahu hopes to avoid having to resign under legal rules that allow a prime minister to remain in office even if charged with a crime.

Police are reportedly investigating the circumstances of the death of 58-year-old Du Wei. He was found dead in his home in Tel Aviv. (17.05.2020)

The Israeli Supreme Court's decision ended the possibility of a fourth election in less than a year. The new coalition government, led by Prime Minister Benjamin Netanyahu, is expected to be sworn in next week. (07.05.2020)